A Better American Way of War 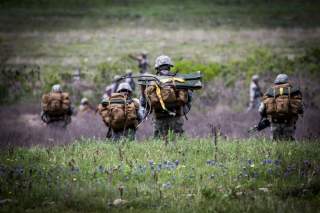 A global power with global interests can’t always afford to pick how it wants to fight. That is an essential insight for understanding the American way of war. And strategists are always eager to understand our way of war—especially when it seems to have failed us.

Consider Vietnam. After that humiliating defeat, American strategists entered into an intense state of soul-searching. What went wrong? One of the most compelling arguments came from historian Russell Frank Weigley. His book The American Way of War: A History of United States Military Strategy and Policy came out in 1973, the year the United States called it quits in Vietnam.

Weigley could not have been timelier. Everybody was looking for somebody to blame. The historian blamed our history. The strategic culture that emerged from America’s military past dictated a particular way to fight and win the nation’s wars. Following the Civil War, Weigley concluded, we grew addicted to a style of conflict that demanded massive resources, overwhelming force, superior technology, a dash of hubris and decisive, complete victory.

In Southeast Asia that formula failed. America fell into a funk.

Nevertheless, Weigley’s influence waned. Our obsession with the tragedy of Vietnam faded as the U.S. military went on a streak of wins from Panama to Desert Storm.

Then the Pentagon struck out in the postwar occupation of Iraq and bogged down in Afghanistan. That prompted another round of soul-searching. Antulio Echevarria, a scholar at the U.S. Army War College, describes the effort as revisiting “the main traits of the American style of war to identify why it seemed to be failing and how to fix it.” Again, the examination concluded that “the causes of failure were deeply rooted in American values or assumptions about the use of force.” Weigley’s way of critiquing war is back. There is a new generation of complaint about the way we fight.

And that’s a problem, argues Echevarria. Weigley was wrong. Surveying everything we have done under arms from the American Revolution to now, “Reconsidering the American Way of War” (2014), concludes, there is no “typical” U.S. practice of warfare.

Rather, Echevarria argues that our wars have “been nothing less than political in every respect and in every period of history.” In other words, we have fought lots of conflicts. Fought them differently. And, to understand why we battle the way we do, we must look at the decisions political and military leaders have made—not some ephemeral spell that forced them to fight one way or another.

People need to pay attention to this critique.

We don’t want to waste our time trying to fix something that doesn’t exist.

Further, we really don’t want to advocate for one particular kind of war practice anyway. The U.S. is a global power. That creates a diversity of commitments for our armed forces, requiring a multiplicity of tasks from strategic deterrence to military assistance in many places, under varying conditions.

What’s more, “the enemy gets a vote.” Often their vote is to try to force you to fight the one way you really don’t want to. Being prepared to fight only “our way,” on our terms, is not so smart. Indeed, marrying U.S. military power to a particular way of war is a prescription for ossification and decline.

While it would be foolish to confine our warfare capabilities to the straightjacket of our own “strategic culture,” we still have a say in how we plan to use our military. In part, America still exists because it has not been completely stupid in how it uses military force.

America has had a succession of “grand strategies” used to guide the general application of military force. And—they haven’t been terrible.

America’s first grand strategy was just stay out of the way as Britain and France struggled for global supremacy.

Over time the U.S. shifted to turning the Monroe Doctrine into a reality and protecting America by excluding the influence of other powers from the Western Hemisphere.

After World War II, the U.S. became a global power with global commitments. Washington exercised that responsibility through the prism of the Cold War, forestalling World War III with the Soviet Union until the competitor from Moscow collapsed.

Within the context of these requirements, the U.S. military was used in a variety of ways—sometimes with wisdom, on occasion with folly, most often with an admixture of both.

While debating American “strategic culture” might be a dead end, debating what should be America’s new “grand strategy” is not. Addressing the foundation of America’s contemporary military requirements was central to the challenge of developing The Heritage Foundation “Index of U.S. Military Strength.” The Index identifies three core tasks that military force is required to support 1) protection of the homeland, 2) the prevention of major conflicts in three regions indispensable to US interests—Europe, Asia, and the Middle East—and 3) essential freedom of the commons (air, sea, space and cyberspace).

Establishing a baseline doesn’t answer all the questions from whether you should buy an F-35 to whether the military should make a habit out of conducting counterinsurgencies. Still, without a foundation of strategic requirements, strategic thinking is rootless.

On the other hand, with a solid foundation our nation’s leader could start taking steps to protect us instead of debating the sins of our so-called strategic culture.

Step One is to have the capacity and capability to address critical tasks. Without enough force to protect a nation’s vital interests, a debate about the ways to protect the nation’s interests is a pretty vapid chat. Presently, the US has only a marginal ability to meet all its essential needs.

Step Two is to match ways and means. Of course, choices have to be made in how American military power is organized and used. Grand strategies aren’t scripts to follow. They are just the broadest of outlines. Leaders have to add a life-line of guiding idea for their particular circumstances. The next president will need to come up with a solid strategy.

Step Three is to have leaders who can lead well. Mediocre political leaders make mediocre decisions. They deal poorly with adversity. They lack the capacity to take the initiative. They don’t deliver results. Who leads and how they lead matter as much as the strategy. And when it comes to the practice of using military force, civilian and military leaders need to form a competent, coherent team.

History, Echevarria warns, “does not permit us to predict what the American way of war will be in the next decade or even the next half decade.” We don’t learn from the past by believing that the past defines what we will, can, or must do in the future. When we repeat the mistakes of the past, it is not because we are forced to because of bad habits. It is because we have failed to embrace the challenges of the future.

The successful practice of arms requires for us to take responsibility for ourselves and exercise that responsibility with judgement, character, and courage. That is the better American way of war.