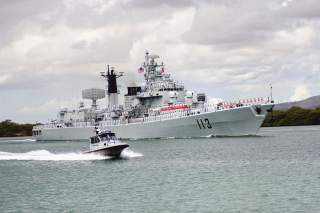 Asian states that worry about conflict with China have cause to worry even more. China’s recently released white paper, China’s Military Strategy, is new and assertive.

Only eight other defense white papers have been issued since 1998, and none focus on strategy the way this one does. It’s assertive not only because it reiterates a willingness to fight with its neighbors on all the familiar regional flashpoints, but also because it lays out expectations of having to do the same far outside its nine-dash line.

Yet, because of China’s reliance on doublespeak, this white paper does little to resolve debates about the proper image of China and its long-term intentions, which will ensure that consensus in the region about how to grapple with a more assertive China remains fractured.

China’s economic growth depends on global markets and access to global resources. The globalization of the Chinese economy has led to a globalization of Chinese interests. China’s Military Strategy unambiguously declares that China foresees needing to project power around the globe to protect those interests.

For some, this is all a matter of course, and no reason to fret. China is merely adopting the playbook of statist neoclassical realism that Fareed Zakaria described in From Wealth to Power. Even the United States followed such a process to great-power status, so there’s nothing new to see in a document that simply confirms China is on that path.

But for those concerned about China’s military capability and capacity, the document is a watershed. Confirming long-held expectations of many China watchers, the People’s Liberation Army (PLA) will no longer optimize exclusively for local, littoral and within-theater military campaigns. It will expand its overall force structure and more greatly emphasize the maritime domain. It will improve proficiency in the ability to project power out of area. And, despite the document’s protestations to the contrary, it will seek a global basing and port access network.

China claims it does not seek an overseas constellation of bases, but unless it has found a way around the constraints of physics, some form of basing networks are essential to sustain global power projection in a way that does more than simply lob missiles at a target.

For nervous neighbors in Asia, China’s Military Strategy cedes no ground on existing disputes, and even implies a growing window of vulnerability for competing claimants. Chinese global power-projection capabilities can be brought to bear in the East and South China Seas, and the experience of deploying PLA forces abroad will strengthen its readiness and jointness—heretofore some of the PLA’s greatest weaknesses. As time passes, China is gradually creating new and well documented precedents favoring its claims by constructing artificial islands in disputed territory. With the most recent defense white paper, China is transparent about the fact that the PLA of tomorrow will be larger, more capable and more willing to fight and defeat those it deems opponents than the PLA of today. Time is thus on China’s side.

Nevertheless, the challenges of balancing China remain as difficult as ever, and China’s white paper does nothing to change that. Concerned neighbors may grow more vulnerable and therefore nervous as China fulfills the ambitions laid out in this white paper, but any state that is today comforted by China’s doublespeak—which frames its intentions as peaceful and its behavior as defensive and reactive—will find plenty of comfort in China’s Military Strategy.

Instead of offensive military attacks and first strikes, China talks of “active defense” and “preparation for military struggle.” The white paper states that “Peace, development, cooperation and mutual benefit have become an irresistible tide of the times,” while decrying “new threats from hegemonism, power politics and neo-interventionism.” It describes China’s external environment as “generally favorable,” yet the entire paper is about how it intends to cope with challenges to its expanding interests, requiring a larger and more diverse military force structure than ever. China says it “will never seek hegemony or expansion,” yet the white paper unquestionably describes a need to project military power globally to protect global interests, and that “China’s armed forces will remain a staunch force for maintaining world peace.” And on the South China Sea, China claims its “offshore neighbors take provocative actions and reinforce their military presence…that they have illegally occupied,” even as it constructs what increasingly looks like airstrips and military bases in legally contested waters.

China’s latest statement of military strategy is full of the doublespeak that whitewashes new and assertive content through self-contradictory statements, ambiguous phrases and benign framing devices even as it describes a brave new PLA for a brave new world. Chinese doublespeak, especially on military matters, is hardly new. But the consequence of it is to reinforce fissures in Asia, driving a wedge between those who find it inconvenient to acknowledge Chinese assertiveness and those who believe they may one day be on the receiving end of Chinese ambitions.

Van Jackson is a Visiting Fellow at the Center for a New American Security and a Council on Foreign Relations International Affairs Fellow. Twitter: @WonkVJ.