Beware The Decline of U.S. Influence in South Asia 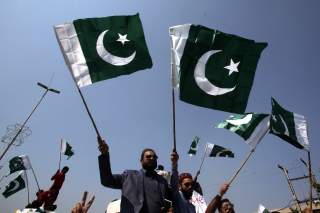 South Asia, for the most part of Donald Trump's presidency, had been quiet up until earlier this year when the region's two main protagonists, India and Pakistan, nearly entered a nuclear face-off. A suicide attack on a paramilitary convoy in Indian controlled Kashmir triggered an aerial dogfight culminating in the capture of an Indian pilot who was later released by Pakistan. The episode marked a major shift in how India responds to terrorist attacks sponsored from across the border: It was the first instance since the Indo-Pak war in 1971 that Indian warplanes had crossed the border and bombed the Pakistani mainland. Naturally, it was expected that the United States, the region's traditional arbitrator, would help diffuse tensions. But for the first time since the early '90s, the United States did not play a significant role in stemming the crisis.

Previously, in 1990 when the insurgency in Kashmir had just begun and a crisis emanated, President George H.W. Bush sent his CIA director to South Asia to calm heads in the region. Later President Bill Clinton was the single greatest influence in bringing an end to the Kargil War of 1999, a year after both India and Pakistan had tested nuclear weapons. Similarly, during the 2001–2002 India-Pakistan standoff, when both countries mobilized troops after an attack on the Indian Parliament, the George W. Bush administration mediated to end the ten-month-long impasse.

America’s role as a buffer seemed to take permanence when then-Secretary of State Condoleezza Rice rushed to the region to prevent possible military fallout following the 2008 Mumbai terrorist attacks. Besides the role of firefighting, the United States has from time to time used its good offices to encourage peace talks between the South Asian rivals. However, this part of the role is often glossed over because neither India nor Pakistan wants to acknowledge outside influence on their foreign policy, particularly with regard to each other. In all, the United States has been central to Indo-Pak dynamics both in peace and war.

However, the recent crisis depicts that the United States has lost considerable ground as an overarching influence in South Asia. Unlike previously, no senior U.S. official was dispatched to control the brewing crisis. At best, National Security Advisor John Bolton reportedly spoke to his Indian counterpart twice in the wake of attacks and expressed support for India's "right to self-defense against cross-border terrorism.” Even though this hinted at a tacit approval of Indian military action, in reality, the United States did not have enough leverage to dissuade India from attacking Pakistan. Under such circumstances, American concurrence can at best be seen as an effort to extract itself honorably from the crisis. Worse, the United States could not prevent a lesser power, Pakistan from launching its own retaliatory airstrikes against India. Apparently, the United States only intervened when Pakistan decided to strike back. Up until that, it was merely following a policy of “wait and watch.” Underestimating the risks, many in the United States seem surprisingly comfortable with this radical departure from its traditional role of an active mediator.

The supporters of this renewed American policy draw their arguments on four main arguments. The most recent one is that the role of the United States is overextended and overcommitted. It’s true that Trump believes that the United States is too involved around the world and should retreat from its commitments abroad. But this position largely stems from the feeling that a lot of resources—both men and material—are being drained in the process. However, South Asia represents a case of policy paralysis rather than commitment problems. The United States has never had a significant physical presence in either India or Pakistan and whatever monetary aid it was giving to Pakistan has seen a major cut ever since Trump administration cracked down on it last year. Instead, the problem is that the region has been low on Trump's priority list. As the recent crisis highlighted, let alone meeting the new prime minister, America has no permanent ambassador to Pakistan who could engage with the Pakistani leadership during the crisis. It is also, despite America’s friendliness to India, increasingly incoherent in its approach to the country. Last month, the Trump administration announced that the United States will not grant any more waivers from sanctions to countries like India that import Iranian crude oil. Similarly, a bilateral meeting hasn’t taken place between Trump and Indian prime minister Narendra Modi since November 2017 and prospects for one appear unlikely.

A second and more plausible argument is that the United States needs India for containing China. To this end, it should side with India in what is the latter's genuine grievances against Pakistan. This is both obvious and logical. India holds a strategic appeal to the United States by virtue of its location and convergent interests. Think of all the commonalities: Shared democratic values; energy security; concern with Islamic radicalism, the aggressive rise of China, the future of Afghanistan, and the geopolitical architecture of Indo Pacific—they all point to the growing convergences of strategic interests between the two countries. But the importance of Pakistan cannot be underestimated. To counter the Chinese, the United States needs Pakistan as much as it needs India. For India to focus eastwards, it requires a stable western frontier for which the United States has to have some considerable leverage over Pakistan. Similarly, exerting too much pressure on Pakistan may actually backfire by invariably pushing Pakistan literally into the lap of China, a scenario which is neither desired by United States or India.

Third, any sort of de-escalatory mediation on part of the United States is seen amounting to condoning Pakistan's bad behavior. But the previous bouts of American intervention have been sympathetic New Delhi’s calls for Islamabad to end its support for terrorism on each occasion. Instead, this helps in the internationalization of legitimizing India's concerns viz Pakistan.

And finally, it is assumed that a favorable U.S. position will be to leave it to India to decide how it wants to respond to Pakistani aggression as the recent crises hinted. But there is a perennial possibility that American indifference will be confused with withdrawal and invite other states to fill the mediating vacuum.

This was visible in the recent spate when Russia and China have reportedly played a far significant role behind the scenes in diffusing tensions. In an interview after the crises had subsided, a senior Pakistani official was quoted saying, "If I say that Russia played the most important role among all the other players, it will not be an overstatement.” Similarly, Chinese foreign minister Wang Yi too confirmed that China played a “constructive” role in de-escalation. Moreover, it is highly probable that the return of the Indian pilot was only possible because of Chinese pressure.

In contrast, America's position was no different from France, Germany, and the United Kingdom, all peripheral powers that endorsed India’s position and chose to sit back. Such an attitude dents America’s credentials as a responsible power for global good. Further, having helped establish a precedent where India responds heavily to a cross border strike, the United States has added to the prospects of escalation between two nuclear powers.

Even as South Asia’s problems have become less susceptible to constructive outside influence, it should not deter the United States from taking a central role in the affairs of South Asia. It is crucial that the United States accepts its responsibilities in South Asia. First of all, the United States needs to stop viewing the region through an Indo-Pak binary. Such a framing often underscores the importance of countries like Bangladesh and Sri Lanka, which are as essential to American geostrategic interests in the region—such as fighting terrorism. Lately, the terrorist attacks in Sri Lanka which were claimed by an ISIS-affiliated group add a more serious dimension. Coupled with the presence of ISIS in Afghanistan, South Asia is fast emerging as a new frontier for the ISIS-led coalition. The United States needs to actively partner the regional countries in dealing with such threats.

As regards to Pakistan, it is not enough to just hand verbal rebukes to Pakistan on the issue of cross border terrorism. The United States must also actively pursue punitive measures to raise the costs for Pakistan’s support to terrorism. With economic crises looming large, the United States can put a high premium for Pakistan to secure a much-needed IMF bailout. Similarly, the Financial Action Task Force (FATF) has already “greylisted” Pakistan since it failed to demonstrate credible action against terror financing. The United States can threaten Pakistan with blacklisting in the case that it continues to support terrorism as a state policy. However, in the same breath, the United States should also check India's high-handedness in Kashmir which serves as a raison d'etre for militant groups in Pakistan to attack India. Last year, the UN released its first-ever report on human rights violations in Kashmir and called for an international inquiry into human rights violations and abuses. Even though India has always resisted outside advice on Kashmir, the United States should encourage India to deal with the Kashmir problem softly.