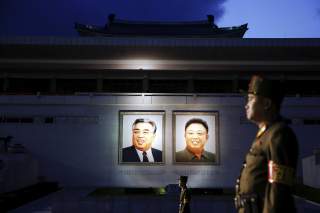 According to Kim Jong-un, the centerpiece of his intended negotiations with President Donald Trump is a newfound willingness to stall or even disarm his nuclear program in exchange for satisfactory guarantees of security. Yet, there are no obvious ways in which Trump could offer any assurances or concessions at the talks he has agreed to hold that would meet Kim’s security needs. The coldness of this reality, undoubtedly fully known by Kim, should cast doubt onto the sincerity of his request for a bilateral summit to start with.

At the most basic level, it seems unlikely that Kim could ever accept a purely verbal or implicit reassurance in exchange for denuclearization. Kim will have learned this lesson by watching the fate of Muammar el-Qaddafi in Libya, who unilaterally renounced his nuclear program in 2003 in response to the American-led intervention into Iraq. Qaddafi had hoped that better relationships with the West would reduce the chances of it intervening against him militarily. This gambit failed in 2011 when a rebellion erupted in Libya and numerous states provided aid, arms and even airstrikes to assist the rebels against him.

A more concrete option for Kim might be to request that the United States officially recognize North Korea as falling within China’s sphere of influence and formally pledge that it will never invade. This was the approach adopted with Cuba in 1963, when the Soviet Union consented to remove its missiles in exchange for, among other things, a guarantee that the United States would not invade Cuba again. Yet, this solution would be anathema for Kim because it would mean placing the fate of his regime into the hands of an increasingly distant China, which could not be trusted to treat North Korean national interests as its own. The fear of being treated this way is part of what left Fidel Castro, who was excluded from the negotiations over Cuba, spitting with rage. It is also unclear how this would represent a big enough change from the status quo—in which China currently offers protection to North Korea as part of their Treaty of Friendship, Cooperation and Mutual Assistance—to satisfy Kim’s security needs. The idea would probably be unpalatable for the Americans too because it would require encouraging an already assertive China to take an even greater role in the region. Finally, the Chinese would likely oppose the proposal because it would mean binding themselves yet tighter to an unreliable rogue regime that has shown repeated recalcitrance in following their directions and whose isolationist belligerence stands increasingly at odds with their own increasingly internationalist approach to foreign affairs.

An alternative could be for Kim to repeat his country’s past demand for the Western demilitarization of the Korean Peninsula. This might include a withdrawal of American troops and equipment from South Korea and an agreement to halt American and South Korean military exercises in the region. This would be a problem for the United States, however, because it would mean diluting its presence in a region that houses some of the world’s largest economic powers and most dangerous potential military flashpoints. Yet, even if Trump agreed to this request, it would offer scant reassurance for Kim because the United States is capable of deploying its forces into the region at short notice. This is based upon the nearby presence of the U.S. Seventh Fleet and American military bases in Japan, Guam, Thailand, the Philippines, Singapore and Hawaii, along with the recent creation of mobilizations centers in the mainland United States that are dedicated to rapidly redeploying U.S. forces to hotspots when needed.

A third pathway could be for Kim to petition Trump to officially accept North Korea as being a nuclear power in exchange for consenting limits on the amount of nuclear weapons that it can own. This would cause challenges for both sides however. For Kim, agreeing to a ceiling to his arsenal could be viewed domestically as a submission to an imperialist foreign aggressor and as an abandonment of its sovereign right to defend itself. From a more practical point of view, it would mean North Korea relinquishing its policy of seeking nuclear parity with the United States, which would leave the state at risk of having its nuclear arsenal disabled in an American first strike in the future. For the United States, blessing the nuclear status of a rogue state with an extensive history of internationally criminal behavior (including inter-state aggression, state-sponsored terrorism, and transnational crime) and domestic human-rights abuses would be difficult. It would also free up North Korea to engage in nuclear blackmail against its neighbors that could spark a regional nuclear arms race with South Korea and Japan. It would further set down a dangerous precedent that rogue states who advance beyond their nuclear programs beyond a certain point will be rewarded with recognition rather than punished.

For all of his cruelty at home and belligerence in foreign affairs, Kim is no fool. He must be fully aware that surefire security guarantees do not exist that would be acceptable to both sides. This raises the question of why then did he offer bilateral talks to start with? One motivation may have been that he hoped to engage in protracted negotiations that give him the space and time he needs to refresh his nuclear program before abandoning talks and beginning testing anew again in a few years’ time. Another motivation could have been that he wants to sign an agreement that barters his nuclear weapons in exchange for a reduction of sanctions, the provision of foreign aid, and the promise of non-interference, but without any intention of honoring his side of the deal by actually denuclearizing. This would scarcely be a new approach for North Korea, given that it has semi-successfully pursued such a course multiple times over the past twenty-five years.

A final possibility is that Kim may have sought to obtain international sympathy by offering direct talks, with the expectation that Trump would decline. This would have allowed Kim to cast himself as a conciliatory peacemaker who is opposed by a warmongering hawk, thereby currying sympathy from Russia, China and even South Korea. This in turn would have encouraged defections from the sanctions regime currently arrayed against his regime. After all, Kim had no real reason to believe that Trump was going to take him up on his offer, bearing in mind that he had been scarcely civil towards North Korea for most of last year and that North Korea’s efforts to negotiate bilaterally with the United States have been rebuffed before by numerous prior presidents. If this suspicion is accurate, then it may be of no great surprise that Kim has gone temporarily silent while he tries to puzzle out his best next move.

The outcome of all of this is that the likelihood of a bona fide deal being signed between Kim and Trump is remote. Worse still, it seems improbable that Kim ever had that objective in mind. Instead, it seems likely that he is playing a strategic game of diplomacy in which he hopes to wrangle some breathing space and short term concessions before the next round of play begins.

Diplomacy is often a very good thing between feuding powers, but in this case Trump must stay vigilant to the very real risk that Kim intends only to pursue short-term goals through deception rather than genuinely search for long-term solutions.

Francis Grice is an assistant professor of political science and international studies at McDaniel College in Maryland. He has a Ph.D. in defence studies from King’s College London (2014) and recently coedited the Palgrave Handbook of Global Counterterrorism Policy and the Future of U.S. Warfare. He specializes in Asian Security Studies and International Relations.