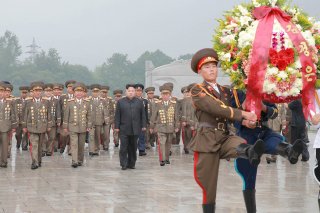 The White House is warning against inflated expectations over the proposed summit between President Donald Trump and North Korean dictator Kim Jong-un. The surprise announcement that Trump had accepted the invitation from Pyongyang to hold the first-ever summit between the leaders of the United States and North Korea stunned everyone from war hawks to peace advocates. Trump’s bold gamble, however, is as much a diplomatic breakthrough as it is strategically risky. Above all, the administration must guard against the summit turning into a Korean Reykjavik, where Trump finds irresistible a dramatic grand bargain to solve the North Korean crisis. Such a move could wind up harming U.S. interests more than continued stalemate.

On the face of it, of course, the North Korean offer seems a victory for Trump’s hard line. Some may even claim that it vindicates his widely derided “mad man” theory of diplomacy. To be sure, the administration’s successful implementation of harsh sanctions appears to have changed the North’s calculus, and reports that it is running low on foreign reserves suggests why Kim may have made his invitation.

Yet anyone who has watched the sad history of U.S. interaction with North Korea knows that Pyongyang always plays a multi-layer game while Washington focuses narrowly on one goal. Pyongyang’s newest gambit may just as easily be a prelude to a further surprise: the unveiling of a tempting grand solution to the Korean peninsula crisis, possibly dropped into the middle of the talks between the two leaders.

It might be hard for Trump to resist such an offer. When Ronald Reagan met Mikhail Gorbachev at Reykjavik, Iceland, in October 1986, their talks quickly ballooned into a truly historic proposal for the complete elimination of nuclear weapons. The fact that an agreement faltered on the rocks of Reagan’s cherished Strategic Defense Initiative does not minimize just how close the two sides came to committing themselves to a plan neither had fully thought out.

Kim may be planning a similar surprise. He could well offer Trump the promise of complete denuclearization for an end to sanctions, the withdrawal of U.S. troops from the Korean peninsula, normalization of relations, and the ending of the U.S.-South Korean alliance. Given that North Korea has repeatedly cheated on its past agreements, any agreement should be met with great skepticism. Without fully transparent inspections, however, America and its allies will never be sure Kim is living up to his side of the bargain, while South Korea will likely look to China for its ultimate security guarantee.

Moreover, North Korea continues to work on other weapons of mass destruction, such as nerve gas, all of which can be fitted onto its intercontinental ballistic missiles. Trump will have to make sure that these threats are eliminated, as well. Pyongyang will have to agree to destroy its ICBM program and existing missiles, none of which it is likely to do. The end result could be to leave Kim’s weapons of mass destruction program largely intact, while American cities could still be targeted. The North’s nuclear program would surreptitiously continue, and America’s credibility in Asia would collapse.

Alternatively, if Trump rightly rejects such a precipitous grand bargain, then Kim can play the disappointed party, and tell the world that he wanted peace but now realizes he can never surrender his nuclear and missile programs in the face of American hostility.

None of this is guaranteed to happen, and perhaps the talks will simply be talks. But we have enough of a track record from North Korea to anticipate some kind of unpleasant surprise. If such a trap is sprung, either Trump will find it impossible to pass up the chance to be remembered as the president who solved the Korean crisis, or he will wind up legitimizing the Kim dynasty’s nuclear program.

Either way, the Trump-Kim summit seems a rushed gamble on Washington’s part. Talking is obviously better than war, but if the North really is rattled enough to offer serious dialogue, it would be better to initiate a series of lower-level talks that methodically work their way up to the Oval Office. Starting at the top will be must-see geopolitical theater, but it is unlikely to be worth the risk.

Michael Auslin is a Williams-Griffis Fellow in Contemporary Asia at the Hoover Institution at Stanford University.