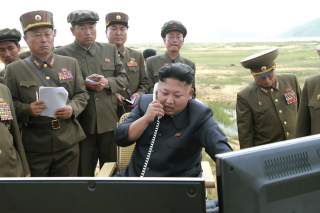 These are difficult times on the Korean Peninsula. With North Korea’s second test of an intercontinental ballistic missile (ICBM) and newfound ability to produce a miniaturized nuclear warhead that can fit inside an ICBM, Kim Jong-un and the North Korean regime continue to demonstrate their persistent and determined effort to become a nuclear threat, in spite of coordinated international efforts to stop them. These actions have raised tensions on the peninsula to a high and dangerous level, potentially leaving the United States and its allies with few options. To forestall this possibility, there are increasing considerations of turning to a military option with some suggesting that the United States engage in a preventive strike to thwart North Korea from succeeding.

At times like these it is the duty of any commander and chief to ensure the safety and security of his citizens which is why over the years neither Republican nor Democratic administrations have taken the military option off the table when it comes to North Korea. However, the United States also has a duty to work with its allies to ensure that its actions do not sacrifice their safety and security unless there are truly no other options available. North Korea’s actions may at some point leave the United States no choice, but those suggesting preventive action should understand the very real costs.

A conflict on the Korean Peninsula as a result of preventive military efforts by the United States to preclude North Korea from completing the development of an ICBM, rather than preemptive actions in a crisis, would have grave consequences for the United States and our allies in the region. If the United States were to take preventive military action to eliminate the North Korean threat without the express support of South Korea and Japan, we would run the risk of willingly endangering two allies that the United States is treaty bound to protect. There is no way we could be sure that preventive actions would not set off a second Korean War. Doing so without allied cooperation would undermine U.S. credibility abroad because our friends would no longer have reason to trust us to live up to our commitments.

Just as troublingly, such an attack might not preclude North Korea from utilizing a nuclear weapon. While North Korean missiles may not be able to reliably reach the continental United States at the moment, the same cannot be said for South Korea and Japan (perhaps even as far as Guam, Hawaii, and Alaska), which might find themselves at risk of a nuclear strike, as some analysts suggest.

A preventive attack would also put significant U.S. lives at risk even if North Korea was unable to deploy its nuclear weapons. There are more than seventy-five thousand U.S. troops stationed in South Korea and Japan, to say nothing of the more than 136,000 U.S. civilians that reside in South Korea. All of these are in the current range of North Korean missiles, while its major population center—Seoul—is within range of North Korean conventional artillery. During a crisis, there would be no good way to protect U.S. citizens, particularly in a densely populated urban area. Trying to evacuate U.S. citizens in advance would send a clear signal to North Korea that an attack was imminent, something that President Trump has said he does not want to telegraph to our enemies.  The casualty counts in any conflict would, of course, be higher among South Korean and Japanese citizens. Should China enter the conflict, U.S. losses could grow.

Beyond the human costs of a conflict, there would be significant economic consequences for the United States as well if a new Korean war were to break out. China, South Korea and Japan are three of America’s top six trading partners as well as three critical players in the global economy. Much of the world’s high-technology industry and the assembly of goods takes place in those three economies. A war encompassing all three nations would likely bring about a catastrophic global recession and have severe economic impacts on the United States, particularly for the nearly four hundred thousand Americans whose jobs are dependent upon the Korean economy.

Despite our best efforts, we might be unable to keep the war in northeast Asia rather than here. North Korea has worked just as diligently at developing its cyber capabilities as its nuclear capabilities. Should a conflict break out, we should assume that North Korea would target businesses and infrastructure in the United States with cyberattacks, causing economic and possibly physical destruction to the United States.

Someday, Kim Jong-un may be on the verge of launching a nuclear armed ICBM and the United States and its allies will have no choice but to defend themselves. However, in the absence of that scenario, we should be cognizant that a conflict with North Korea would not only be devastating for our allies South Korea and Japan, but it would also have consequences for the United States as well. Until that moment comes, we should try every tool available short of conflict, but be prepared, as a last resort, to take military action in concert with our allies.

Donald Manzullo is a former congressman and was chairman of the Subcommittee on Asia and the Pacific of the House Foreign Affairs Committee. He is currently president of the Korea Economic Institute of America, a not-for-profit, non-lobbying, educational organization, which is registered as a foreign agent of the Korea Institute for International Economic Policy, a public policy research institute funded by the government of the Republic of Korea.