Beware the Rise of Left-Wing Authoritarianism 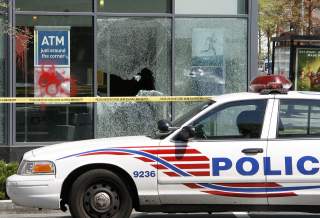 There were punches thrown, limos set ablaze, and windows smashed amid violent protests in D.C. the day of President Trump’s inauguration. But in Seattle the fury led to a shooting, as leftist radicals tried to shut down a speech by Breitbart.com tech editor Milo Yiannopoulos. A 34-year-old man suffered what sources described as a “life-threatening” gunshot wound to the abdomen. He was taken to Seattle’s Harborview Medical Center in critical condition.

A suspect has been arrested, but police have yet to say anything about his background or the context of the shooting. (Early reports described the shooter as a 50-year-old Asian male.) The bloodshed occurred when crowds that had been protesting Trump converged on the University of Washington campus to redirect their rage at Yiannopolous. A heavy police presence ensured that the speaking event went ahead, as protests continued outside. Yiannopolous interrupted his talk when word of the shooting broke. Then he resumed, saying, “If we don’t continue, they have won.”

Whether the shooting was politically motivated or simply a spontaneous act inspired by the charged atmosphere of the protests, the radicals who have created these conditions should pause to think about blowback. Sensible progressives and middle-of-the-road liberals should also ask themselves some tough questions about whether they oppose political violence and censorship half as much as they abjure Trump. If they do, they should be even more quick than conservatives to condemn what has been happening from D.C. to Seattle.

There is an obvious irony in the use of brownshirt tactics by people who think of themselves as “anti-fascist.” The thugs on the street are not the only ones who are hypocritical here, however: many a liberal pundit—for that matter, certain NeverTrump neoconservatives, too—has irresponsibly likened Trump and populist movement behind him to fascism. The independent left-wing journalist Michael Tracey has documented many such statements and rhetorically asked whether these liberals understand what they are saying: if you really, truly believe the country is on the verge of a fascist takeover, isn’t violent resistance necessary?

The blood and broken glass in the streets only comes from a tough few following through on the incendiary words of elite progressives who should know better. But the urge to grandstand and moralize grips so many in the media that they fail in their real moral task: to draw correct lines between the objectionable and the absolutely unallowable. For too many in the chattering classes, the imaginary fascism of Donald Trump or Milo Yiannopoulos excuses the real-world censorship and intimidation practiced by the illiberal left.

The irony does not stop there, however. If the radicals who burn with self-righteous ire would calm down and read a little a history, they might learn about how genuinely extreme right-wing movements come to power. Nice, middle-class voters do not wake up one day and decide they’d like to be harangued from a balcony by Mussolini. What empowers the authoritarian right is the horror the extremist left gives rise to among otherwise moderate voters. Bolshevism was the midwife to fascism.

America is far from either Bolshevism or fascism, but the counter-productive nature of left-wing violence for the left’s own purported ideals is obvious. The Black Lives Matter protests backfired in last year’s election, where Trump’s solidarity with law enforcement in the face of BLM criticism only helped solidify his support. Yiannopolous’s whole career is predicated on the intense reactions he can count on provoking from the left—reactions, typically censorious and not seldom violent, that only fuel the interest in hearing what Yiannopolous has to say.

In its own cowardly way, the center-left goes even further, with the liberals in the media giving David Duke and other white-nationalist crackpots far more attention than they receive from any actual right-wing outlet. The urge to brand everyone on the right as a racist and authoritarian by association drives certain self-righteous journalists—and some who are just cynically chasing ratings—to act as publicists for the Klan and neo-Nazis. This can only have a radicalizing effect on everyone in the long run: it draws a small number of the stupid and resentful to the Klan’s banner; it creates the impression in the minds of timid liberal viewers that right-wing extremists are on the rise (and logically, must be forcefully countered by government or street action); and it outrages and polarizes conservative viewers who are sick of seeing a partisan media shower attention upon marginal extremists on the right while turning a blind eye to left-wing intimidation. Those outraged conservatives are as a result only more likely to vote for Trump and to support him in his hard criticisms—and before long, perhaps hard policy measures—against the media.

The revolutionary left likes to imagine it can win through polarization. It can’t: all it can do is expose the weakness and hypocrisy of the center left and clear the way to electing a Nixon or Reagan—or Donald Trump. America does indeed have a center-right orientation, and the center-left has typically only succeeded when it has explicitly rejected the hard left—as Bill Clinton symbolically did with Sistah Souljah—or when, as in the case of Obama, it has reaped the rewards for the Republican Party’s own right-liberal errors.

The atmosphere of intolerance, censorship, and incipient violence created by both the thuggish hard left and the ideologically preening elite left will have dire results for everyone. It undermines support on the left and right alike for free expression and a minimum of interference—by coercive government or coercive mobs—in assembly, organizing, and expression. If serious progressives, including opponents of Trump, want to stop this cycle of illiberalism, they have to stop demonizing the right and start training their rhetorical fire on the vandals in the street and the ideologues in the newsroom. Doing so will not only safeguard Americans’ liberties, it might well save lives. In the meantime, the Trump administration and the Justice Department need to not only to think about how to stop the current spate of violence, but move to stop it before it gets even worse. Appeasement is not an option.