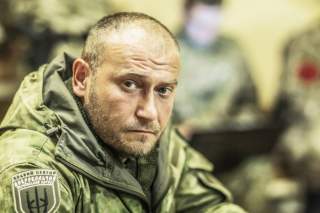 As tensions continue to rise under the fragile ceasefire in the Donbas region of eastern Ukraine, the central government must now redirect its energy to a domestic issue in the west.

On July 11, violence broke out in Mukachevo, just east of the Slovakian and Romanian borders. The dispute began when local police accused the ultranationalist Right Sector group of smuggling cigarettes. Right Sector members are no ordinary citizens—they have military-grade weapons and serve independently on the front lines against Russian-backed rebels. The conflict remains unresolved, with Right Sector leader Dmytro Yarosh accusing Kiev of attacking its own, rather than focusing on the war in the east. As Right Sector surfaces once again, it is helpful to revisit the group’s origins to examine the impact the group may have on the conflict in the Donbas.

In February 2014, after a month of violent protests in which ultranationalist groups played an active role, Ukrainian president Viktor Yanukovych faced impeachment and ultimately chose to flee the country. The ouster followed Yanukovych’s controversial decision to renegotiate Ukraine’s potential membership in the EU. As he responded to protests with draconian legislation and violent reprisals, momentum grew not just among moderate nationalists, but also increasingly within the far right. Extremist and outright fascist organizations, such as the “Patriots of Ukraine” and “Trident,” united under the name “Right Sector.” As conditions grew more violent, Ukrainians overlooked ideological differences and joined forces with Right Sector against the pro-Russian government as a common enemy. As their numbers swelled, Right Sector became the catalyzing force that eventually helped to remove Yanukovych from power. Following the revolution, Right Sector formed a political party, which is now represented in Ukraine’s parliament, the Verkhovna Rada.

Since the Maidan Revolution, Right Sector has maintained only marginal public support. Currently, the party holds just one seat in the parliament of 422. Recently, however, as the group has become more outspoken against the current Petro Poroshenko administration, its numbers have risen. From 1.8 percent in October, the group’s popular support now stands at 5.4 percent. Dmytro Yarosh addressed a crowd of over 5,000 on July 21, calling for a nationwide no-confidence referendum against President Poroshenko, who, along with his prime minister, Arseniy Yatsenyuk, is steadily losing public support. There is little traction for the referendum, but it still calls to mind the former success of Right Sector to help unseat President Yanukovych through sheer force and persistence.

Despite having minimal representation in the Verkhovna Rada, let alone influence, Right Sector has played a significant role in providing paramilitary support for Ukrainian troops in the Donbas. The group is the last militia force to operate in the east independent of the government-controlled army. Right Sector militants fight for their own doctrine, one of ultranationalism and conservative values. Over the past year, Right Sector battalions have earned the respect and support of Ukrainian soldiers in the Donbas. Their assistance is important for government troops who often find themselves ill prepared for battle, due to the inefficiencies and economic burdens of the central government.

With ample weapons and new recruits, Right Sector is not likely to disappear soon.

Though many perceive them as extremists, they represent a bloc of anti-Russian hardliners that regard any concessions in the east as a defeat for the Ukrainian nation-state. The small but consistent foothold that Right Sector occupies in Ukraine should make its allies apprehensive. The Ukrainian government is reliant on the military support of a controversial right-wing group. Right Sector officially rejects xenophobia and fascism, claiming to be open to anyone that supports the Ukrainian State. However, Russian media exploits the group’s rhetoric, exaggerating and outright fabricating evidence to the contrary. For Russia, amplifying and embellishing Right Sector’s rhetoric and influence provides justification to protect ethnic Russians in the Donbas. Beyond issues posed by Right Sector’s misrepresentation in Russian media, violence in Mukacheve and resulting standoffs with Kiev suggest a more critical issue at stake for the Donbas conflict.

Ambiguity in the Minsk II protocol, coupled with differing objectives of Ukrainian and pro-Russian forces, continues to stall a lasting ceasefire or meaningful reforms in the Donbas. As contact groups continue to negotiate implementation challenges, it is more important than ever to ensure that the marginal progress achieved so far is preserved. Right Sector has serious potential to derail a moderate resolution to the conflict in Ukraine, but not necessarily because of its ideology. The group poses a threat to conflict resolution because it combines radical ideas with a highly functional militia outside of government control. Right Sector is useful to Kiev, but only as far as its goals align. This can potentially pose a major dilemma for U.S. objectives in the region.

For the United States, making the Minsk II protocol of February 2015 work remains the surest way to avoid escalation of the regional conflict. As the product of compromise after a successful rebel offensive in January 2015, the Minsk II protocol is no doubt an imperfect framework. However, the alternative to working within the framework of Minsk II is a renewed conflict that Ukraine may well lose. This situation would put Ukraine’s allies in NATO, particularly the United States, under pressure to respond. Meaningful support may entail steps that no one in the administration or Congress is prepared to advocate. Boots on the ground or facing off with Russian air forces would put the United States at risk for unpredictable consequences, jeopardizing national-security interests. This imperfect alternative is precisely why the Minsk II protocol is widely accepted in the United States and Europe as the best solution for the Ukrainian conflict.

Since Ukraine is a victim of Russian intervention, there is understandable reluctance in the United States to be critical of any military forces fighting Moscow and its clients. Exaggerated Russian claims about supposed Ukrainian fascism do not make an objective discussion of Right Sector any easier. It is no surprise that there is hesitation in Washington to focus on the group as a threat. They are the supposed allies of our allies and the target of Russian propaganda attacks. Many Americans would interpret apprehension toward Right Sector as sympathy for Russian objectives, or even worse, susceptibility to Russian propaganda.

Currently, the United States can easily dismiss the group as a benign nuisance, overblown by Russian media to justify continued aggression. From a sober examination, however, Right Sector could pose a serious threat not just to the Russian-backed rebels, but also to the Ukrainian government supported by the United States. Even though the military aims of the central government currently align with Right Sector’s (at least where Minsk II is concerned), these radicals will not support any concessions made by Kiev.

Regardless of how media outlets portray Right Sector, even a conservative reading of its doctrine shows its unwillingness to compromise. Without meaningful negotiation between the central government and the Russian-backed rebels, Minsk II will fail and full-scale conflict will resume. A renewed conflict will put Ukraine’s sovereignty in even greater peril, pressuring the United States and NATO to intervene. As Poroshenko’s popularity declines, Right Sector has an opening to derail U.S. objectives in the region, ultimately and ironically helping President Putin protect Russian interests. The United States—despite its distaste for Russian foreign policy—must acknowledge that in order to effectively support Ukraine, it must be wary of Right Sector’s growing presence.

Julia Embody is a program associate at the Center for the National Interest.