Beyond Chávez: Is Venezuelan Democracy Here to Stay? 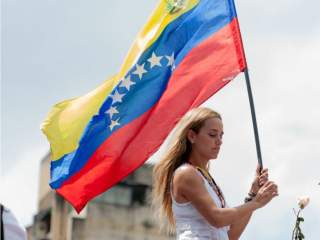 Desperate Venezuelans earlier this year took to tossing mangoes at their president, Nicolás Maduro, scrawling on them messages begging for help with housing and other pressing needs as the country sank further into a hyperinflationary depression.

With the official word Tuesday night that the opposition coalition, the Democratic Unity Roundtable (MUD), won 112 seats in Venezuela’s National Assembly, Maduro will become the target of far sharper attacks in the months ahead than rotten mangoes. The opposition’s sweep to power in the December 6 parliamentary elections was as remarkable as the government’s swift acceptance of its defeat (an acceptance spurred by Venezuela’s military, which seems to have had its fill of Bolivarian socialist revolution). The results give the opposition coalition a two-thirds supermajority, enabling it to take broad steps to reverse course after sixteen years of chavista rule. The new National Assembly majority will, among other things, be in a position to free political prisoners, remove judges from Venezuela’s Supreme Tribunal of Justice (TSJ) and pass “organic” legislation that falls somewhere between normal legislation and constitutional amendments. It will be vital for the new National Assembly to use all of these tools aggressively.

But most importantly, the two-thirds majority entitles the National Assembly to call a referendum to remove the president from power. No one believes that Maduro would win such an election today and, if anything, he is personally more unpopular than chavismo as an abstract movement. Therefore, in one fell swoop, the MUD could finish early next year what the “6D” elections began, giving Venezuela a clear transition to a post-chavista future and allowing the MUD a free hand at fixing the country’s basket-case economy.

Opposition leaders, mindful of past failures when chavismo’s opponents went too far, are not yet fully committed to seeking a recall referendum. In light of the opposition-backed 2002 coup, a bumbling attempt that removed Chávez for around forty-eight hours, and the clumsy 2004 failure to recall Chávez in a democratic referendum, the MUD’s hesitation is understandable. Moreover, now that the MUD has achieved power through the National Assembly, a coalition that brings together a disparate group of political parties will find itself increasingly split over both political strategy and policy substance.

Nevertheless, removing Maduro from power must be a priority when the new National Assembly sits in January. Francisco Toro, writing at the inestimable Caracas Chronicles, makes the point that the opposition is as much in danger of underreach as overreach:

We could end up very much in the position of a Caribbean Morgan Tsvangirai, the Zimbabwean opposition leader who “negotiated,” joined the government as prime minister, brought some measure of economic stability... and extended the Mugabe dictatorship’s lease on power by at least a decade.

Venezuela, which is expected to contract by 10 percent this year alone, is nevertheless one of Latin America’s most important economies, a leading global exporter of crude oil and home to the world’s deepest reservoir of proven reserves. Perhaps more importantly, Venezuela has been an anchor in the Caribbean regional economy at a time of increasing fiscal distress. For better or worse, Chávez also showed that Venezuela can punch above its weight on the international stage as well.

In a “normal” democracy, it would not be atypical for a divided government to emerge, in the same way that Republicans today control the legislative branch and Democrats control the executive branch in the United States. It’s true, gridlock might come to dominate Venezuelan governance. But Maduro, who lacks a powerful presidential veto, would be forced to accept the MUD coalition’s policy prescriptions to get the economy back on track, however painful the compromises for both sides.

Yet neither Maduro nor the chavista high guard has shown the slightest bit of respect for the democratic process. Though Chávez came to power—and stayed in power—on the strength of a bona fide popular and democratic mandate, his government and Maduro’s government have gone out of their way to make a mockery of democratic norms. They have diverted government funds, including the country’s dwindling oil revenues, to nakedly political purposes for so long that it’s difficult to know where chavismo ends and Venezuela’s government begins. They’ve imprisoned opposition leaders like Leopoldo López and former Caracas mayor Antonio Ledezma without due process on charges that even López’s prosecutor (speaking safely from exile in Miami) admits were politically motivated. Chavistas have dominated the Venezuelan media so thoroughly that it’s hard to speak of any real press freedom; in 2015, it had the worst record in South America, according to Reporters Without Borders. The outgoing head of the National Assembly, Diosdado Cabello, has bullied and harassed the opposition at every step, is reported to have ties to drug traffickers and other criminal elements, and shows no sign of accepting the docile role of loyal opposition leader. The list goes on and on (Rory Carroll’s excellent 2013 book, Comandante: Hugo Chávez’s Venezuela, exhaustively catalogs the abuses, both petty and serious).

Though there was once a democratic basis for chavismo’s legitimacy, its unique record since 1998 demonstrates that it simply cannot be trusted to execute the new National Assembly’s laws in good faith. In crisis mode, with the worst-performing economy in the world, Venezuela simply cannot wait until the scheduled 2018 presidential election to turn the page on chavismo.

A fresh election would test the MUD’s resolve by forcing it to choose a presidential candidate within weeks, not years—a decision that could shatter the coalition’s fragile unity, because there’s no shortage of solid possibilities from among its ranks. López, newly minted as a martyr after spending nearly two years in prison for the sake of Venezuelan democracy, with youthful telenovela-style good looks and a family lineage that goes back to Simón Bolívar himself, is surely a top candidate. So is the 2012 candidate Henrique Capriles, the popular two-term governor of Miranda state, whose economic and social policy views, as well as his political instincts, are far more moderate than most of his MUD colleagues. Another possibility is Henri Falcón, a popular two-term governor of Lara state, who defected from chavismo in 2009 over controversial constitutional changes, and who could bridge the polarized divide between chavistas and opposition supporters. All three must play an important and united role in their country’s future.

The most serious risk for the opposition is that it will demonstrate, even sixteen years later, that it has not yet learned the lesson of Chávez’s success, itself a response to a half-century of two-party corruption that rotted Venezuela nearly as much as the socialist-style corruption that followed. The opposition now has the opportunity to show that it can do what Chávez always promised, at least in terms of using Venezuela’s oil wealth to lift many of its citizens out of extreme poverty and provide them with reasonable assurances of education, health and social welfare.

It’s a set of policies that countries across Latin America, from the right and from the left, from Peru to Mexico to Brazil, are implementing with moderate success—and none of them needed to subvert their constitutions, wreck their economies or invent revolutions to do so. Ironically, Maduro’s sorry fate and Venezuela’s sad condition follow directly from the government’s own refusal to learn those lessons. The dangers to Venezuela from its failure to reform were clear enough in April 2013, when Maduro only narrowly won the snap presidential election that followed Chávez’s death. There’s nothing revolutionary about capital controls, crumbling oil infrastructure, political kickbacks and petty corruption.

Moreover, the MUD can show that many of the misiones, the welfare programs that Chávez introduced, will work more effectively in a more transparent country with a stronger economy. For example, the MUD might gradually reduce fuel subsidies that keep oil prices so comically low in Venezuela (less than one cent per gallon of oil), deploying those proceeds to stabilize social welfare programs and, in so doing, removing what amounts to a handout to the country’s middle classes and wealthy.

If it succeeds, the MUD may be far more effective than Chávez ever was at achieving the goals of his so-called revolution.

Kevin A. Lees is an attorney in Washington, DC, and the editor of Suffragio.org.