Beyond Political Correctness: Anti-Semitism at Oberlin 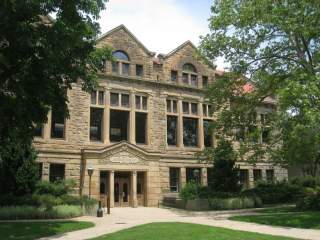 Fox News broke a story that’s been circulating on Jewish online media outlets for the past several days. Joy Karega, a professor of Rhetoric and Composition at Oberlin College, the elite liberal arts college in Ohio, has been posting anti-Semitic hate speech on her personal social media accounts for the past several months. It’s not unusual for professors to take controversial stances for the sake of intellectual engagement, but Karega has gone beyond the pale. A screenshot of one of her Facebook posts, dated in December, reveals what appears to be an elderly man cast in a sinister light, giving him a deliberately Jewish and scheming appearance: large nose, wide eyes, and thin lips twisted into a sinister smile. The text reads:

“Hello there, my name is Jacob Rothschild. My family is worth 500 trillion dollars. We own nearly every central bank in the world. We financed both sides of every war since Napoleon. We own the news, the media, your oil, and the government. You’ve probably never heard of me.”

In the caption next to this disgusting meme, Karega declares the need “to dismantl[e] real Power [sic].”

A November 2015 Facebook post is even more unnerving. Karega makes the explicit argument that ISIS is not a jihadist group, but is rather a collaborative effort between the CIA and Israeli intelligence agency Mossad. “It’s troubling that in this day and age, where there is all this access to information, most of the general public doesn’t know who and what ISIS really is. I promise you, ISIS is not a jihadist, Islamic terrorist organization. It’s a CIA and Mossad operation, and there’s too much information out here for the general public not to know this.”

This is the sort of thing one expects to read on anonymous message boards in dark corners of the Internet, not on the Facebook page of a professor at an elite U.S. college. There is no factual basis that her claims are correct. She does not cite any peer-reviewed journals. She is vehemently supporting the most pernicious of conspiracy theories, no question.

Oberlin’s response has been shockingly tolerant of Karega's vicious nonsense. Oberlin President Marvin Krislov said that even though he lost family members in the Holocaust and his grandfather was an Orthodox rabbi, allowing this kind of speech should continue on college campuses. “My father instilled in me a strong belief in academic freedom,” Krislov wrote in a statement. “I believe, as the American Association of University Professors says, that academic freedom ‘is the indispensable quality of institutions of higher education’ because it encourages free inquiry, promotes the expansion of knowledge, and creates an environment in which learning and research can flourish.”

This is all well and good, but it’s clear that not one iota of Karega’s posts meet this standard of academic freedom. While it’s true that these statements came from a personal account, and that many intellectuals voice opinions that differ from that of their employer’s, Karega doesn’t appear to be offering an opinion in the hopes of promoting any sort of productive discussion. She believes the Jews are ruining the world and is shocked that no one seems to be doing anything about it. It is ignorance and maliciousness of the highest degree, and has no place in higher education.

Were this any other place of employment, Karega would have been sent packing, not just for anti-Semitism, but for lack of basic professional competence. Karega declared that the online messages that she has received will serve as data for her new book, which is a clear violation of the Internal Review Board’s ethical standards for human data collection. Her Facebook posts are riddled with the most fundamental grammatical and spelling errors and read like letters from an insane asylum. With this kind of staggering lunacy shaping the next generation of students, I have to ask: if Karega were not a minority woman, but a white man, would her “ideas” be given this much free reign? Is this what affirmative action and political correctness bring to the American higher education system? In 2016, incoherent ramblings of a raging anti-Semite somehow pass for scholarship. This is beyond distasteful. It’s terrifying. I’m reading in the news the same hatred I read in history books. Marvin Krislov, fire Joy Karega and restore the intellectual integrity you have left at your institution. Show your peers that your campus is not a petri dish for odious, ignorant charlatans.