Beyond Short-Term Solutions in the Middle East and North Africa 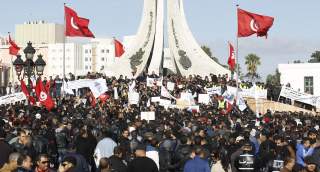 In the final months of 2018, seven years after historic change swept the Middle East and North Africa (MENA), countries in the region still face significant political, economic and security challenges. In most countries that underwent a transition, the situation is worse than before: a protracted civil war and humanitarian crisis in Syria, a divided Yemen hosting a Saudi-Iranian proxy war, deteriorating human rights conditions in Egypt, and ongoing challenges facing Tunisia’s transition, to name the most prominent. With their project on the “Arc of Crisis in the MENA Region,” Karim Mezran and Arturo Varvelli take a close look at these issues. Their attention to how history informs the current state of the region is much needed.

When confronted with difficult policy choices, some U.S. administrations and European governments forget that challenges plaguing the region have historical roots that must be taken into account when formulating policies. At times, U.S. and European politicians view the region as an exasperating crisis or potential quagmire and long to be free of it. Most U.S. presidents, for example, pledge during their first days in office to spend less time focused on the region, but inevitably find themselves forced to address numerous issues there.

There are many reasons that Americans and Europeans should care about the Middle East. While the United States is primarily concerned with Israel’s security and the threat of Iran’s growing influence, the ongoing conflicts in the region—with their spillover effects and threats to U.S. economic and military interests—also warrant American attention and involvement. Europeans need only look to migration across the Mediterranean that has sparked a public backlash and nationalistic posturing. The history of blaming others for Europe’s problems led to catastrophe and is still fresh in historical terms. Although Europe’s youth may see World War II as ancient history, some of Europe’s nationalists who embrace xenophobia may desire a return to authoritarian tactics. These cracks in Europe’s liberal veneer are not only Europe’s problem. They allow for a disruptive Russia “semi-power” to foster and exploit fears. They weaken the alliance with the United States that has been crucial to maintaining a stable liberal system in Western Europe since 1945.

The many distinguished scholars that author the “Arc of Crisis” report focus on three topics in their examination of the region’s woes. First, they examine prospects for decentralization in the face of weak central governments. The prime example is Libya, where local actors (in some cases violent ones) are filling in for the nearly-dissolved central government. Second, the authors take on the changing nature of political Islam, its different forms and manifestations, and its approaches to political influence in the region. Third, the authors examine the difficulty of taking advantage of energy deposits in the Eastern Mediterranean due to prevailing political uncertainty.

These three issues can all be linked to the weakness of civil society in the MENA region. The region is largely stuck in a political space marked by fear and uncertainty. Leaders fear change and suppress it, as demonstrated by near daily incidents of repression, silencing of dissent, and criminalization of speech and peaceful demonstration. Citizens fear the uncertainty and chaos that change can bring and know they will pay increasingly high prices for dissent, including, in some cases, their lives. Authoritarian leaders in the region have taken advantage of this situation and have expanded their clampdown. The organs of civil society, such as media outlets, are dominated by the state. The police apparatus spends much of its time monitoring the speech and activities of citizens rather than protecting the population.

Given this situation, while attempting to address the daily challenges of conflict in the MENA region, Europe and the United States also need to work on the longer-term and more difficult issue of nurturing civil society.

The United States and Europe should endeavor to collaborate on achieving a more coordinated and comprehensive approach to supporting the people of the MENA region. This could take many forms. One element could be developing a better ability to understand trends on the ground, be they regional or highly local. Western embassies should have a strong emphasis on cultivating people and institutions outside government. The overriding goal would not be to convince locals to support Western policies or to promote democracy, but rather to get a better sense of people’s needs and viewpoints. This would in turn help tailor U.S. government assistance more effectively, sending it where it is needed. Public diplomacy could be another element, which would include a sustained investment in people-to-people exchanges. Exchanges are long-term investments by their nature, but they are a proven method of developing leaders.

It is in the United States’ and Europe’s self-interest to pursue a strategy of long-term civil society development in the MENA along with seeking stability and an end to conflicts in the shorter-term. This includes defending the principles that we believe strengthen our own societies: inclusion, transparency, citizen participation in the political process, equality and due process. As history has shown, countries that embrace these principles enjoy more stability, higher economic growth and tend not to war with other democracies. Likewise, U.S. and European businesses operating in the MENA region have a vested interest in greater transparency, clearer rules and regulations, and educational systems that produce skilled workers. Such reforms cannot be divorced from openness in civil society. Aside from the economic and strategic reasons to support universal values of freedom and dignity, there is a compelling moral element as well since all people should enjoy these basic rights.

Mezran and Varvelli are well aware that almost all change in the MENA region will come from within and sometimes emerge from very local contexts. Their project on the “Arc of Crisis” brings us a bit closer to understanding the problems in their full context, thus putting the United States and Europe in a better position to make informed policy choices in both the short and long-term. The crises in region are likely to continue or even worsen, making it even more crucial for U.S. and European policymakers to address the underlying causes rather than just the symptoms.

Richard LeBaron is a nonresident senior fellow at the Atlantic Council. He served as the U.S. ambassador to Kuwait from 2004 to 2007 and deputy chief of mission at the U.S. Embassy in Tel Aviv from September 2001 to July 2004. Follow him on Twitter @RBLeBaron.