Beyond Spying: How to Save the U.S.-German Alliance 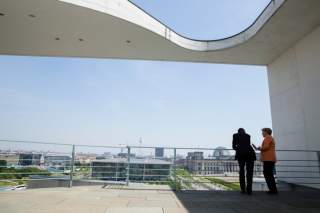 While Washington fumbled the NSA clash with Germany, Berlin too has had a hand in stoking the heated debate over U.S. surveillance programs. Public denunciations and empty promises of retaliation undermine the vital intelligence coordination to counter real threats to both our countries. We may eventually strike a better balance between security and privacy, but we definitely need a better approach to dealing with each other.

Over the past year, the public debate has occasionally devolved into mudslinging. The discovery of a U.S. informant in Germany’s intelligence service in July led to the rare, public dismissal of a CIA Chief of Station, which led Finance Minister Wolfgang Schäuble to label U.S. spying as “stupid” and another official from Chancellor Merkel’s party suggested throwing out the entire U.S. “digital occupying force.” The disclosures this past month that Germany had intercepted a few of Hillary Clinton and John Kerry’s phone calls have led some in Washington to accuse Berlin of hypocrisy.

The Obama administration has tried to restore some measure of trust since Snowden’s revelations of NSA surveillance last summer. In a public speech by President Obama in January, he announced the “unprecedented step of extending certain protections that we have for the American people to people overseas” culminating in the Presidential Policy Directive (PDD-28). This summer, a “cyber dialogue” brought a range of officials from both sides together and the White House Chief of Staff, Denis McDonough, hand-delivered to Berlin a set of “guiding principles” on intelligence cooperation.

The exchanges have helped reaffirm a long-standing intelligence partnership, but German officials say they need more to satisfy an irate public. They point to the 90 percent of Germans who believe it is unacceptable for the United States to monitor either foreign leaders or citizens compared with just over 40 percent in the United States, according to a recent Pew Poll. Yet they miss how similar German and American views are on the need for surveillance against suspected terrorists. And while Germans are adamantly opposed to governments’ bulk collection of Internet and telephone metadata, so too are over half of Americans.

Unfortunately, the NSA issue has only exacerbated what has been a steady deterioration in German-American relations. U.S. favorability in Germany has dropped further over the past five years than in any other Western country, reflecting both the high expectations following President Obama’s election and many years of critical media coverage of U.S. foreign policy, including the invasion of Iraq, secret CIA prisons in Europe, the Wikileaks scandal and the use of drones in conflict regions. The media will no doubt continue to chase the slow trickle of stories from Snowden’s files, which will only further complicate the relationship.

To get out of this vicious cycle, U.S. and German leaders would do better to reaffirm their shared interests instead of fixating on their differences. Both countries continue to cooperate on a range of sensitive issues, including the ongoing discussions with Russia over Ukraine, with Iran over its nuclear program and the threat posed by instability in the Middle East. U.S. and European officials are particularly worried about the hundreds of their citizens who have traveled to fight in the region. The challenge of protecting our countries from intellectual property theft and data sabotage is arguably just as important to our modern economies. A strong intelligence partnership is vital to addressing these physical and digital threats, particularly at a time when Berlin states its willingness to be more decisive in foreign affairs.

Of course, we cannot ignore the two countries’ very different experiences with privacy and the role of government in regulating digital information. While it is an unavoidable reality that countries spy on one another, whether friend or foe, Germany understands privacy as a basic human right in large part due to its history under a National Socialist regime and the abuses of the East German security services. Germany cannot wish away the tools needed to deal with today’s world, nor can we expect them to ignore the lessons they have learned from a bitter past.

Both need to move beyond this impasse and focus on the broader challenges of data privacy and protection in the digital age. The cost to business of the NSA revelations has been estimated to be anywhere between $22 billion and $180 billion and further action from the European Union on data privacy could put on hold negotiations over the Transatlantic Trade and Investment Partnership (TTIP). There is, thus, much more at stake in maintaining U.S.-European relations than the terabytes of data being stored at the NSA.

Unfortunately, our political leaders are overwhelmed and quite frankly underinformed about these complicated issues and the policies needed to address them. Far more dialogue is needed between members of the German Parliament and members of the U.S. Congress, especially on efforts to end bulk data action. Political leaders must also leverage the specialized knowledge of experts from the business community, academia and civil society in both the United States and Europe. U.S. policy makers can better understand the parameters of privacy in Germany, while German policy makers will have an opportunity to explain to their own public the purpose of intelligence and the value of U.S. cooperation.

By shaping this dialogue, the public will become more aware of the digital challenges we both share and the realities of the German-American partnership. One opportunity to jumpstart this effort would be a public meeting by the relevant cabinet officials in Germany. U.S. Attorney General Eric Holder received his colleague Interior Minister Thomas de Maizière in Washington this spring and should return the favor by traveling to Berlin.

It is hyperbole to suggest that the uproar over the NSA revelations has irreparably damaged German-American relations. If anything, the issue has revealed the long, productive relationship between the U.S. and German intelligence services since the Cold War. Unfortunately, it also has shown a conspicuous lack of political will to get past our differences. Now that neither country can deny that it is has listened in on the other, it is finally time we get ahead of this dead-end debate and take a wider view of the challenges we both face.

Jackson Janes is the President of the American Institute for Contemporary German Studies at the Johns Hopkins University in Washington, DC, where he has been affiliated since 1989.

Parke Nicholson is the Senior Research Associate at the American Institute for Contemporary German Studies. He oversees the research programs, grant writing, and conducts research on workforce development, energy geopolitics, and German foreign policy. Previously, he worked at the Center for the National Interest and the Council on Foreign Relations.