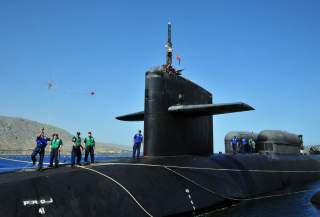 General Dynamics' storied Electric Boat division is set to deliver its detailed design proposal for the new Ohio Replacement Program (ORP) ballistic missile submarine to the U.S. Navy this Friday. That will kick off a series of events, which will culminate with Electric Boat signing a contract to design and build the new ‘boomer’ in the fall after a Milestone B review in August. That’s assuming the Congress manages to pass the fiscal year (FY) 2017 budget.

With construction of the new ballistic missile submarine set to begin in fiscal year 2021, the goal is to deliver the first boat in time to its conduct its first deterrence patrol in October 2030. Unlike with the Virginia-class attack submarine, Electric Boat will be the sole prime contractor and will be responsible for delivering all twelve ORP boats to the Navy. However, while Electric Boat will be responsible for eighty percent of the work on the ORP, Huntington Ingalls Newport News—the only other shipyard capable of building a nuclear submarine—is heavily involved in the design and build phase. Newport News has a total responsibility for about twenty percent of the boat's design and construction—about 300 of the company’s engineers are working with Electric Boat to design the new submarine. Dividing up the work in this manner will help to preserve the nation’s critical nuclear submarine engineering and manufacturing skills.

The Navy expects the new arrangement to drive down the learning curve for the new boomer and reduce costs by having only one prime contractor. “The decision here was to facilitize Electric Boat and have EB do all twelve deliveries of the Ohio Replacement, put down one learning curve over twelve ships,” Capt. David Goggins, Naval Sea Systems Command program manager for the ORP, told an audience at the Navy League’s Sea, Air and Space symposium on May 17.

In an attempt to minimize costs, the Navy drew upon as much technology from the Virginia-class as possible. However, there are some major differences between the two designs—especially towards the stern of the vessel. The ORP is designed to have greatly improved survivability. The Navy emphasized stealth and survivability because of the boat’s critical nuclear deterrence mission—the ORP has to be survivable through 2080 in order to guarantee America’s nuclear deterrence, Goggins said.

Even though the detail design phase has yet to start, work on many critical aspects of the program have already started. Electric Boat will complete the submarine’s common missile compartment (CMC) arrangements before the end of this year. “We’ll start our prototyping of the missile compartment this year, this summer,” Goggins said.

The idea behind the prototyping is to reduce risks associated with the new missile compartment—which should also help to reduce manufacturing costs. Moreover, the British—who will also use the same missile compartment design—are expected to start construction of their new Successor-class ballistic missile submarines in the coming months. That means that the Royal Navy needs to have the CMC design completed and proven before they install those modules onboard the first of their new boomers.  “We’ll start prototype construction this year,” said Will Lennon, Electric Boat’s vice president of engineering and design programs in an interview with The National Interest. “Because the design of the common missile compartment supports the United Kingdom and the U.S. designs—the United Kingdom is going to start their construction as soon as they go through their main-gate which is scheduled for later this year. So they’ll start construction either later this year or early next year.”

The design and construction of the CMC is one of the four major technical innovations onboard the ORP. When the Ohio-class was designed and built, empty missile tubes were simply welded into the hull. Workers would insert the electronics and other hardware necessary to make those tubes work later in the construction phase through various hatches and other openings. “Very inefficient,” Lennon said.

The OPR uses a completely new method. Instead of inserting one tube at a time into the hull for later outfitting, the CMC is built as part of a section with four tubes built-in—called a Quad-Pack. The four tubes are manufactured and fully outfitted before being combined into a single module for installation. That module is then inserted into the hull as a unit. The ORP will be fitted with four Quad-Packs to carry a total of sixteen submarine launched ballistic missiles—but the smaller British Successor-class would only be fitted with three such units for a total of twelve missiles. Theoretically, if the ORP’s other systems could support the additional weight and power requirements, adding more missiles to the design would simply mean adding additional Quad-Packs. The tubes are the same 87-inch diameter vessels as the current Trident II D5 launchers on the Ohio-class, but are a foot longer—leaving some margin for a future missile design.

Though the British are involved in the program, they are not directly assisting in the design of the CMC. “They’re not doing the design, but they’re involved in what we call design-build,” Lennon said. “They have their people looking at the design, making sure it is producible. They do have some unique systems that the U.S. doesn’t have that we are working together to make sure that they fit into the common missile compartment space.”

Another major innovation onboard the ORP is the boat’s 42-year life-of-the-boat nuclear reactor—which is being developed by the Office of Naval Reactors. While the Virginia-class also has a life-of-the-boat reactor, the U.S. Navy has never designed and built a reactor with the kind of longevity as the powerplant being designed for the ORP. Indeed, the reactor is one of the reasons the Navy was able to reduce its requirements for the number of ORP vessels it needs from fourteen down to twelve. “It’s a much longer period of time this ship will be operating than the Virginia-class, much more energy,” Lennon said. “It’s really a significant enabler in that it eliminates the need to do that deep midlife refueling overhaul that we do on Ohio today.”

One other major innovation onboard—and one that will be carried forward onto future U.S. nuclear submarines—is the ORP’s permanent magnet motor electric drive. Lennon said that there is not much more that can be done to reduce a submarine’s acoustic signature using mechanical means—moving to a permanent magnet motor opens up much great potential for stealth. “If you look ahead and look at what’s going to be required of future submarines, mechanical drive has pretty much reached its limits in terms of acoustic performance,” Lennon said. “The benefits and improvements going forward will largely be done through electric drive technology.”

The OPR will not be the first American nuclear submarine with an electric drive—in the late 1950s, the one-off USS Tullibee (SSN-597) pioneered the technology. Later, in 1960s and 1970s, the U.S. Navy built the USS Narwhal (SSN-671) and USS Glenard P. Lipscomb (SSN 685) to test turbo-electric drives—but the technology proved to be troublesome.

However, Lennon said that electric drives have come a long way since those early days of Tullibee—rather than direct current the new motors use permanent magnets. Permanent magnet motor technology is well understood in terms of performance and engineering. “It’s mature technology,” Lennon said. “We’ve studied it, we’ve tested it and we’ve done a lot of engineering demonstrations on it. I feel pretty comfortable that the technology is mature. Now it’s just integrating it together.”

While there have been rumors  that the ORP is larger than its Ohio predecessors because of the size of the electric drive and its permanent magnet motor—despite carrying eight fewer missiles—Lennon said that is not true. The ORP will be larger than the Ohio-class because of the enhanced survivability measures integrated onboard the submarines—the new boats will displace more than 20,800-tons. Indeed, the Navy could have opted to build the boat with twenty or twenty-four missile tubes, but chose not to in order to make sure the United States dispersed its nuclear deterrence. “If you look at the overall length of the ship, the length of the missile compartment is smaller,” Lennon said. “But it’s distributed pretty much equally—the increase—forward and aft. Very little of that has to do with electric drive. It’s really to do with the other capabilities we’ve had to put into the ship in order to meet the mission needs.”

While he could not go into detail, Lennon said those mission needs include performance—including survivability and acoustics. “We’ve had to designate larger volumes in order to put certain features and capabilities into the ship,” he said.

One other visible difference between the ORP and previous U.S. nuclear submarines is the X-plane tail surface configuration. The new configuration is needed to meet the Navy’s hydrodynamic performance requirements for the new submarine, Lennon said. The last time the U.S. designed X-plane controls for a submarine was when America was still building diesel-electric boats. ORP also moves the submarine’s dive planes to the sail to ease maintenance issues—a boomer needs to have high availability. “You really have to make this ship maintenance friendly,” he said. “That’s one of the reasons we went back to fair-water planes.”