Bickering Amid Bipartisanship Promises Will Turn the Beltway into a Circus 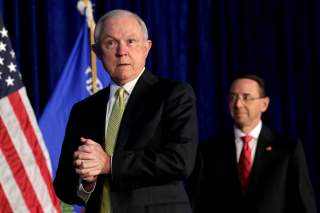 If you had any illusions about whether we were about to enter into a grand new era of bipartisanship, then they should have come to an abrupt end with the ouster of Attorney General Jeff Sessions.

Try as President Donald Trump might to tout the “beautiful deals” that await him once likely House Speaker Nancy Pelosi takes the reins, the “war-like posture” is what we really should expect.

With a few exceptions, the Democrats elected as part of Tuesday’s House takeover were not voted into office to work with Trump. The Republicans who won Senate seats are more beholden to Trump than their predecessors and the ranks of the Never Trumpers, always small, were further depleted, though newly minted Utah Senator-elect Mitt Romney is a wildcard.

The stage has been set for even more intense confrontation in Washington than we saw during the first two years Trump was in office. If Democratic leaders even want to cooperate with the president, with the arguable exception of an infrastructure bill, or tamp down impeachment talk, then Trump will behave in ways that make that goal politically untenable.

As Trump did on Wednesday. Sessions has, at least temporarily, been replaced by an acting attorney general who appears to take a dim view of the Robert Mueller Russia investigation, which he will now oversee. If that is not a shot across the bow to Jerrold Nadler, Elijah Cummings, Adam Schiff, and all the incoming Democratic committee chairmen who will investigate and otherwise bedevil him, then it is difficult to imagine what would be.

The House Freedom Caucus’ hand has been strengthened, along with the power of Trump’s loyalists in the Senate. Many Democrats in Congress will either owe their seats to “the Resistance” or will want to run against Trump in 2020 (or both). After the midterm elections came and went with no October surprise, rumors are once again swirling around the Mueller probe. Things are going to get ugly fast.

Democrats are overestimating what they’ll get out of all their committee hearings and oversight, short of Mueller finally revealing something that lives up to the liberal hype. Their efforts will be covered more favorably than the Whitewater and Benghazi committees. There will certainly be interesting things to subpoena. But these exercises mainly rile partisans who don’t currently need much riling. Well documented reports about Trump’s taxes and family foundation have fallen flat compared to public relations gambits like the anonymous New York Times op-ed.

Senate Republicans will busily confirm Trump’s judges and executive branch appointees. They may even act as his last line of defense if the Democrats try impeachment. Senate Majority Leader Mitch McConnell has already warned against “presidential harassment.” Trump would not have moved on from Sessions if he did not think he could get a new, more pliant attorney general confirmed.

Divided government has traditionally allowed each party to be a check on the other’s excesses. It helped produce balanced budgets when Bill Clinton tried to triangulate against Newt Gingrich’s “Republican revolution.” But the Democratic and Republican policy agendas are difficult to achieve even through a unified government, which contributes to the anger and frustration in both parties.

With one party’s rank-and-file convinced that the president is obstructing a federal investigation into his malfeasance and the other sure he is being railroaded by the deep state, this mix is a prescription for a circus-like atmosphere.

Don’t expect it to end before the 2020 presidential election.

W. James Antle III is editor of the American Conservative. He was politics editor of the Washington Examiner during the the 2016 and 2018 election cycles.