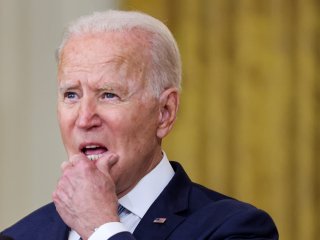 The surge at the border is now officially a full-blown and “unprecedented” crisis.

The Washington Post published an op-ed in March, written by three authors, including a former member of the Obama administration, claiming that the border surge was “seasonal.” They wrote that the “current increase in apprehensions fits a predictable pattern of seasonal changes in undocumented immigration combined with a backlog of demand because of 2020’s coronavirus border closure.” President Joe Biden went with this line too. It turns out it wasn’t seasonal.

Numbers released on Thursday show that U.S. Customs and Border Protection apprehended over 212,000 illegal immigrants in July. This included about 19,000 unaccompanied minors. These are the highest numbers in twenty-one years and are occurring in July, a month where border apprehensions are typically down due to the heat. Since Biden took office in January, U.S. Border Patrol agents have arrested over a million people at the border. There is a serious problem at the border, which is now impossible to deny.

Homeland Security Secretary Alejandro Mayorkas called the surge “unprecedented” at a news conference following the release of the numbers.

“The situation at the border is one of the toughest challenges we face,” Mayorkas said. “It is complicated, changing, and involves vulnerable people at a time of a global pandemic.”

This is a terrible time to have hundreds of thousands of barely filtered people entering the country every month.

It’s directly running against the administration’s message about the seriousness of containing the coronavirus pandemic and the Delta variant. As cities and states consider returning to indoor mask mandates and other restrictions, it seems there are now significant numbers of people infected by the disease being introduced into the U.S. population.

Authorities in McAllen, Texas, said in a statement that over seven thousand coronavirus-positive immigrants have been released by U.S. Border Patrol in their city since February. These people are left with Catholic Charities and tested by a third party. Catholic Charities is now completely overwhelmed by the sheer number of people it is taking in.

Many apprehended illegal immigrants are not even being tested before being released by U.S. Border Patrol into cities because the number of people the agency is dealing with is too great. They still aren’t being tested once they are in these cities because if they test positive, then they must be quarantined.

“The reason why we don’t do testing is that once you test, there’s an obligation,” Laredo Mayor Pete Saenz (D) told MyRGV.com. “If they’re positive, we’re told that you have to quarantine. We don’t have the infrastructure for that.”

Even the New York Times reported in April that the border issue was a challenge to countering the pandemic, reporting that the “jam-packed border processing centers” and limited testing are creating potential openings for widespread transmission.

How much is this contributing to the number of coronavirus cases in the United States? That’s hard to determine but it’s ridiculous to think it’s having no impact. At this point, health officials announcing that it’s not a problem is about as credible as when people declared that President Donald Trump’s rallies were super spreader events yet had no issue with Black Lives Matter protests.

Biden campaigned on being the competent alternative to Trump, the man who would take the pandemic seriously and build back better. If the point was to maximize policies that would keep Americans safe from the virus, then a tidal wave coming across the border runs directly counter to this campaign promise.

After all, border enforcement is one of the primary ways the federal government can do something about a pandemic—or at least it is one of the constitutionally sound ways of doing so. Unfortunately, the Biden administration doesn’t appear to be too concerned about that.

The Biden administration appears both incapable of dealing with the crisis and unwilling to admit that its policies aren’t working. The only significant suggestion stems from an eighteen-page “root causes” plan, released by the office of Vice President Kamala Harris. The plan essentially says that the border issue will be solved when several of the Central American countries that produce the most illegal immigrants can be made into prosperous, thriving nations. So...when exactly will that be happening?

John Daniel Davidson, a political editor for The Federalist, wrote in an opinion piece that the plan “amounts to a heap of bureaucratic nonsense from an administration that has never taken illegal immigration seriously and whose own policies have turned the border crisis into a maelstrom of chaos.”

What Biden has done is change the policies of the previous administration while signaling that he would take a softer approach to illegal immigration. Biden ended the “Remain in Mexico” policy, which allowed border officials to send asylum seekers back into Mexico as they wait for adjudication in their cases. He also ended the Asylum Cooperative Agreements with Central American countries, a policy intended to nudge those countries that send the most asylum seekers to the United States to enforce their own borders.

The Biden administration halted border wall construction projects as soon as he entered office. It also called on Congress to cut 96 percent of border security assets and infrastructure funding out of the budget. This includes surveillance towers and other border wall security measures.

Add this all up and it’s not hard to see why the border has become an unmanageable catastrophe in six months. Incompetence alongside ideological and policy commitments are creating a legal, humanitarian, and health crisis on America’s southern border. That the border is a gushing spigot. It deeply undermines the message that the United States needs to curb the spread of the pandemic by any means necessary.

Build back better was the message but “disintegrate faster” has become the reality.