Biden’s Opportunity for Peace in Eurasia 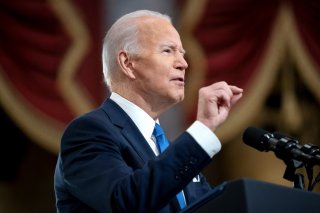 In late December 2021, Russian president Vladimir Putin threatened that the rejection of Russia’s proposed security agreements with the West would be met with “appropriate retaliatory military-technical measures.” Gilbert Doctorow, a Brussels-based political analyst, has translated this to mean the deployment of additional Russian military equipment including nuclear-armed SS-26 Iskander-M short-range ballistic missiles to Belarus and Kaliningrad to threaten NATO’s frontline states and eastern Germany. He also speculated that it might refer to a possible deployment of nuclear-armed Zircon sea-launched hypersonic cruise missiles off the coast of Washington, DC, which Russia has previously stated could be utilized to destroy the U.S. capital before the president could escape on Air Force One.

Unfortunately, bilateral U.S.-Russia negotiations broke down this week after the U.S. delegation reportedly refused to offer Russia any concessions or recognize any of its legitimate security concerns, most importantly in Ukraine. In response, Russia has stated it has no plans to resume bilateral discussions with the United States to end the crisis and is continuing to escalate its preparations for war. At this point, the only way to give Russia a face-saving solution to the Ukraine crisis would be for the Biden administration to offer a significant concession such as the suspension of U.S. military assistance to Ukraine.

Meanwhile, a number of national security experts have concluded that Russia intends to use the United States’ unwillingness to negotiate a security agreement on Moscow’s terms as a pretext to invade Ukraine within the next few months. Moreover, Russia is threatening to raise the costs for the United States by threatening to deploy its military assets (potentially including nuclear bombers or missiles) to Cuba and Venezuela.

Time is running out for the Biden administration to avert a potential nuclear war with Russia, which could cost many more lives than were lost in World War II. The Biden administration has expressed its desire for peace with Russia but should understand the chances of war with both Russia and China will remain more likely than not so long as the United States continues to send arms and military forces to interfere in nations that are adjacent to Russia and China (e.g., within their spheres of influence). That said, it is not too late for the United States to abandon its high-risk policy of containment and military brinkmanship with Russia and reach a mutually acceptable compromise. What is most needed right now is for the United States and NATO to restore trust and a mutual sense of security in their relationships with Russia. To avoid stumbling into such an unnecessary and apocalyptic war, a new strategic framework that recognizes the vital security interests of the United States and Russia and resolves other outstanding sources of tensions must be established. Otherwise, a more stable, secure, and enduring peace will remain elusive.

Since President Joe Biden and other NATO leaders have publicly declared that they will not intervene militarily in the event of a Russian invasion of Ukraine, the United States essentially has two options. It can either stand aside and watch the Russian military overrun and seize control of Ukraine, likely ending its existence as an independent state, or it can undertake a serious effort to negotiate a security agreement with Russia along the lines of what Putin has offered. Given that there is no realistic chance that NATO members will agree to allow Ukraine to join NATO, which has already expanded to Russia’s borders, there is no reason not to issue a written guarantee to Russia confirming the same. Furthermore, current U.S. military deployments in Poland total only about 4,000 with an additional 1,000 NATO troops, while the United States has already withdrawn all of its troops from the Baltic region (which Washington then sent back in January, leaving a force of only 3,000 NATO troops). In addition, there are 1,000 U.S. troops deployed in Romania. Needless to say, these small-scale forces, totaling a mere 9,000 troops, would be woefully inadequate to stop, let alone slow down, a potential Russian invasion of these NATO member states. As such, their presence serves as more of a pretext, rather than a deterrent, for Russia to attack the states on which they are deployed. Accordingly, agreeing to withdraw them would be the most sensible thing for the United States and NATO to do from a strategic standpoint.

Since becoming president, Biden has alluded to his desire to improve and “reset” relations with Russia. Accordingly, rather than inadvertently provoke an undesired war, he should seize the opportunity Putin has provided to restructure Europe’s security architecture and establish a new détente with Moscow. Such an agreement might, for example, ensure Ukraine’s continued independence in return for Ukraine's adoption of a new federal constitution that allots additional autonomy to its oblasts/regions and legally codifies the rights of Russian citizens who reside in eastern Ukraine. As part of this compromise peace agreement, the United States, NATO, and Ukraine would also formally recognize the Russian annexation of Crimea, whose population is over two-thirds ethnic Russian, and which was part of Russia until 1954.

In response to my previous article arguing for the recognition of Russian, Chinese, and U.S. spheres of influence, a Russian think tank, which appears to represent the Kremlin’s views, denounced my proposal for the United States to leave NATO in exchange for a Russian withdrawal from the Chinese-led Shanghai Cooperation Organization (SCO), which serves as its de-facto military alliance with the People’s Republic of China (PRC), as “a trap.” Accordingly, rather than make U.S. acceptance of Russia’s draft security agreement conditional upon a Russian departure from the SCO, U.S. acceptance of Russia’s proposed security agreement should be conditioned upon the signing of a U.S.-Russia Treaty of Friendship, Cooperation, and Mutual Assistance like the one that Russia concluded with the PRC over two decades ago.

Such an agreement would serve as the centerpiece of a new European security architecture that could end what has been called “the Second Cold War” between the United States and Russia. It would likely redefine U.S.-Russian relations by forging a grand strategic partnership between the two nuclear superpowers and ushering in a new era of mutual cooperation. If U.S. leaders began to see Russia as a potential strategic partner rather than as an adversary, they would likely be much more willing to offer the compromises necessary to ensure a peaceful resolution of the current standoff over Ukraine. Assuming the United States then ceased deployments of its military forces in the Taiwan Straits and the South China Sea, such a friendship agreement with Russia would greatly reduce the chances that the United States would either be dragged into a war with Russia and China or face the threat of an adversarial nuclear first strike.

Biden could also make U.S. approval of Russia’s security agreement conditional upon other concessions, such as a Russian commitment to significantly reduce its carbon emissions in furtherance of the Biden administration's climate change agenda. The United States would agree to withdraw all its military forces from Eastern Europe in exchange for Russia agreeing to return to full compliance with the Conventional Armed Forces in Europe (CFE) Treaty limitations on troop levels and the deployment of heavy weapons in Europe as well as returning its troops massed on Ukraine’s borders to their bases. In addition, the United States and Russia could agree to reinstate the Intermediate-Range Nuclear Forces (INF) Treaty, which the United States left in 2019. This could be followed by the signing of a U.S.-Russia Free Trade Agreement, meaningful military-technical cooperation, and the establishment of a joint U.S.-Russian missile defense shield in Europe, which Putin called for back in 2000. Military-technical cooperation between NATO and Russia, perhaps via the NATO-Russia Council, would also be encouraged. Russia and NATO could also implement further confidence-building measures and joint military exchanges designed to increase cooperation, trust, and friendly relations between Russia and NATO.

In return for Russia’s consent that the Baltic republics remain a part of NATO, the United States would agree to the construction of a land bridge/elevated road and rail highway through southern Lithuania that connects Russia’s ally Belarus (and thus Russia itself) to Russia’s Kaliningrad enclave. The United States could agree to withdraw all its tactical nuclear weapons from Europe in exchange for Russia’s agreement to denuclearize and withdraw all Russian nuclear-capable bombers as well as ballistic, hypersonic and cruise missiles from its Kaliningrad enclave and not station any ground or air-launched nuclear weapons outside of the territory of the Russian Federation. However, if Russia insisted on the departure of the Baltic states from NATO as the price of a peace agreement, the United States might agree providing Russia issue a written guarantee of the independence of the Baltic states with their neutrality ensured by international treaty (as was done with Austria under the Austria State Treaty of 1955).