Biden’s Taliban Gamble and Over the Horizon Mirage 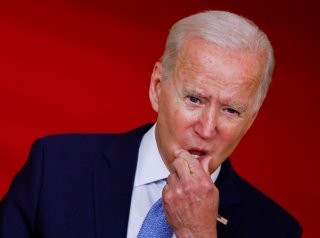 As bad as the Biden administration’s cut-and-run policy has been in terms of abandoning Afghan allies and undermining the trust of NATO allies, the glaring drawbacks of trusting the Taliban to protect U.S. national interests in Afghanistan stand out.

The Biden administration has shared intelligence with the Taliban on the security situation near the airport since August 14. U.S. officials in Kabul reportedly gave the Taliban a list of names of American citizens, green card holders, and Afghan allies in hopes of easing the passage of those on the list through the Taliban-controlled outer perimeter of the city’s airport.

Although Pentagon officials have expressed frustration with the lack of Taliban cooperation and its continued turning away of people with valid documents at the gates of the airport, the Taliban now have a list of many of the Afghans who had assisted the U.S.-led coalition and were left behind.

This move has angered and frustrated critics, both inside and outside the administration. “Basically, they just put all those Afghans on a kill list,” said one anonymous defense official. “It’s just appalling and shocking and makes you feel unclean.”

Not only did Taliban officials broadcast their opposition to allowing Afghans to exit the country on August 24, but Taliban leaders also failed to prevent the August 26 bombing that killed thirteen Americans and more than 200 Afghans at the airport.

That bombing prompted Senator Bob Menendez (D-NJ), the chairman of the Foreign Relations Committee, to issue a statement that obliquely criticized the Biden administration: “As we wait for more details to come in, one thing is clear: We can’t trust the Taliban with Americans’ security.”

The August 26 bombing was claimed by the Islamic State Khorasan Province (also known as ISIS-K or ISK). The terrorist group is affiliated with the Islamic State, which carved out a caliphate the size of Great Britain in Syria and Iraq in 2014 before it was defeated.

Founded in 2015 by former members of the Taliban, Pakistani Taliban (Tehrik-i-Taliban), and Islamic Movement of Uzbekistan, ISIS-K has emerged as one of the bloodiest terrorist groups in the world.

In contrast to the Taliban, which focused on seizing power in Afghanistan, ISIS-K sees itself as the vanguard of a worldwide movement to build a global caliphate as soon as possible. It is locked in an ideological struggle for power with its rival, the Taliban, which it derides as a heretical nationalist movement that has collaborated with Pakistan and America.

ISIS-K was set back by a U.S.-led counterterrorism campaign that targeted its leaders and strongholds in eastern Afghanistan, inflicting over 10,000 casualties by 2020, but it remains a potent terrorist threat.

ISIS-K launched the August 26 suicide bombings to reap the propaganda benefits of killing U.S. troops and their Afghan allies, staking its claim to driving the United States out of Afghanistan and exposing the vulnerability of the Taliban, which it reviles for its limited cooperation with Washington.

ISIS-K undoubtedly hopes to attract the support of new followers, including the hundreds, if not thousands, of foreign jihadists who are likely to flock to Afghanistan like moths to a flame. ISIS-K, estimated to have about 2,000 fighters now, has good reason to expect a surge of recruits.

Up to 40,000 foreign fighters joined ISIS in Syria and Iraq before the fall of the caliphate. Although the influx of militants to Afghanistan is likely to be much smaller, ISIS-K is positioning itself to attract new foreign and Afghan recruits, as well as increased funding from Islamist militants around the world.

Painted Into a Corner

The Biden administration painted itself into a corner in Afghanistan by proceeding with a half-baked peace plan originally negotiated by the Trump administration. Although the Trump administration maintained that the U.S. withdrawal would have been based on conditions on the ground, President Joe Biden went ahead with the withdrawal long after it was clear that the Taliban was not fulfilling its commitments to reduce violence inside the country or break ties with Al Qaeda, whose 9/11 terrorist attacks provoked the war in Afghanistan.

Khalil Haqqani, who recently emerged as the Taliban’s chief of security for Kabul, is Jalaluddin’s brother and Sirajuddin’s uncle. He was officially designated as a terrorist by the United States in 2011, and also has a $5 million reward offered for his capture.

Clearly, the prominent role played by the Haqqani network within the Taliban makes a Taliban break with Al Qaeda extremely unlikely, regardless of the wishful thinking of gullible Westerners.

A Renewed Base for Exporting Terrorism

It will be virtually impossible to put the terrorist genie back into the Afghan bottle. Before 9/11, the Taliban hosted not only Al Qaeda but more than twenty other Islamist terrorist groups. Many of those groups will flock back in much greater numbers than ever before.

The Taliban claims to be interested only in Afghanistan, but its hostile ideology will lead it to become an incubator not only for Al Qaeda but for many other Islamist terrorist threats. With the disastrous evacuation now over, those threats are likely to mushroom as Western attention is diverted by other issues.

Although the debacle in Afghanistan has been compared to the end of the Vietnam War, a better analogy is the ill-advised total withdrawal of U.S. troops from Iraq in 2011, which enabled the rise of ISIS.

Unlike the fall of Vietnam, which exported boat people, the fall of Afghanistan is likely to export terrorism. Following the rise of ISIS in 2014, Islamist terrorists committed serial mass murders of hundreds of people in Paris, Brussels, Berlin, Istanbul, San Bernadino, and many other soft targets around the world.

The Obama administration negotiated a flawed 2015 nuclear deal with Iran that it believed would enable bilateral cooperation with Iran to defeat ISIS. But after the defeat of ISIS, Iranian-controlled Iraqi militias that had battled ISIS focused on targeting U.S. troops in Iraq.

Iran also was caught red-handed protecting key Al Qaeda leaders in Tehran. Washington should have learned that the enemy of its enemy was not necessarily its friend.

The situation in Afghanistan is even worse than in Iraq because large numbers of American civilians remain stranded in Afghanistan. Secretary of State Antony Blinken estimated on August 30 that fewer than 200 Americans remain in the country, but nobody seems to know the actual number.

The remaining Americans and other foreigners in Afghanistan now have become high-value targets for terrorist hostage-takers. Even if Taliban leaders actually try to fulfill their promises of safe passage for foreigners, they are likely to do little to prevent their Al Qaeda allies or other terrorist groups from seizing American hostages to advance their own agendas.

Criminal groups also are likely to exploit the chaos, kidnapping Americans to extract ransom payments or sell them to terrorist groups.

The Biden administration has downplayed the enormous risks inherent in its sudden and total troop pullout, maintaining that it retains the capacity to defeat terrorist threats by employing military assets based “over the horizon.” It has cited the U.S. counterterrorism campaigns in Iraq, Syria, Somalia, and Yemen.

All of those battlefields, however, are located in close proximity to the sea, which affords relatively easy access to naval-based special operations forces, warplanes, and drones. Moreover, in those cases, the United States operates with the support of neighboring states and of local allies on the ground who provide indispensable intelligence for targeting terrorists.

In Afghanistan, the United States will now be flying blind, without any reliable allies on the ground. And if it develops actionable intelligence, it is likely to take many hours or even days to deploy commandos, bombs, or missiles on target to attack terrorists who may have relocated in the meantime.

The bottom line is that the United States will have fewer options for attacking terrorists or disrupting their plots.

A Boost for Terrorists in the “Forever War”

In 2010, when bin Laden was orchestrating an attempt to assassinate President Barack Obama, he specifically ordered his followers to refrain from killing the vice president. U.S. rules of succession, he felt, would benefit his Jihad immensely. If Obama were killed, bin Laden wrote, “Biden is totally unprepared for that post, which will lead the U.S. into a crisis.”