Biden’s Wilsonian Errs: America Needs a Pragmatist, Not a Preacher 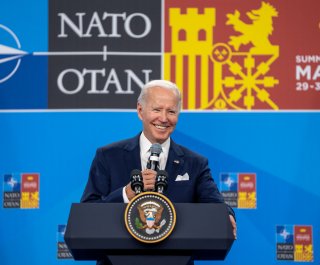 From proclamations that “America is back” to promises of “relentless diplomacy,” President Joe Biden’s foreign policy framework sounds decisively Wilsonian. By centering his foreign policy on restoration—of treaty alliances, trade partnerships, and international institutions—Biden seeks to “recreate the dominance of the Wilsonian worldview,” as John C. Hulsman put it. But it is unclear why the strategy of the 1920s should be the foremost paradigm of the 2020s. The Biden doctrine is fundamentally about one predominantly ideological goal: making the world safe for democracy.

To some analysts, Biden’s withdrawal from Afghanistan characterizes the administration’s foreign policy as a pragmatic, not ideological, system. But the Afghanistan withdrawal was not a shift from Biden’s fundamental doctrine. Rather, it represented a regional reprioritization of interests necessary in an evolving threat environment. The hasty, uncoordinated nature of the withdrawal is emblematic of a political and ideological display, not a calculated strategic effort. Indeed, Biden had little choice. Former President Donald Trump had committed to the withdrawal, and an active decision from the new administration to renege on that commitment would have provoked a strong response from an electorate tired of fighting “forever wars.” This ideological grounding explains why, counter to what those who believe Biden’s foreign policy puts “pragmatic realism above liberal primacy” would expect, American troops in Syria fight on as hordes of airstrikes are continually launched in Iraq despite more pressing challenges elsewhere.

Nonetheless, Biden has had considerable success in his years in office, capitalizing on some of the low-hanging fruit left by his predecessor: rejoining the Paris Climate Accords, extending the New START treaty, and recommitting Washington to its NATO allies. The administration has even managed to find a bipartisan spin to these efforts by leaving some Trump initiatives as-is—the Space Force, the Abraham Accords, and the relocation of the U.S. embassy in Israel to Jerusalem—while employing a forceful, rallying response to Vladimir Putin’s war in Ukraine.

Undoubtedly, the administration’s shortcomings have come as well. The transition from name-calling to fist-bumping with Saudi crown prince Mohammed bin Salman was only outdone by the Biden administration’s failure to revive the Iran nuclear deal. But as Biden looks to the coming years, the easy choices will become few and far between. Biden’s conception of a new grand strategy in Washington will increasingly shape material actions, and putting ideology over interests and shared values over mutual threats ultimately risks creating a more dangerous world for America. While the rhetoric coming out of the White House does little to materially convince wavering allies that Washington is committed to its partnerships, it risks limiting Washington’s maneuverability in an increasingly less democratic world.

Democratic coalition-building is only important insofar as it serves as a unifying principle for nations with common interests. If these countries’ shared democratic values produce unity on strategic goals, then an alliance of democracies might be the bloc Washington needs to outcompete Russia and China. However, this opposition to rising powers should be a strategic, not ideological, contest.

This is not the Cold War, and castigating the modern threat environment as a “fundamental debate” between democracy and autocracy risks doing more harm than good. Considering the following three reasons.

First, the United States needs China. Biden has recognized the growing importance of international cooperation to address the global challenges of pandemics, climate change, and nuclear proliferation, among other issues. He must similarly recognize that the West and its democratic allies will need help in successfully addressing these obstacles. With its economy outpacing America’s, Beijing has employed a political, economic, and technological machine to gain pervasive global influence. Beijing’s Belt and Road Initiative, push to globally deploy 5G technology, and vaccine diplomacy during the pandemic worked to form a nation with a considerable stake and valid demand for inclusion in efforts to face transnational challenges. While the competition on the explicit threats posed by China is important, framing U.S. grand strategy as focused on “taking down illiberal powers” risks precluding cooperation with powerful potential partners on areas of mutual concern.

Second, framing U.S.-China relations as an “us-or-them” confrontation helps China build its coalition. Those with anti-Western tendencies are handed, vis-à-vis Biden’s push for transnational ideological alignment, their conduit for a united opposition. Despite its historical rivalry with Beijing, the Kremlin has established a marriage of convenience with China as the two autocracies cozy up into a “no limits” partnership. China has since provided an alternative to the SWIFT payment system for post-sanctions Russia, and the two are now cooperating on de-dollarization and disinformation campaigns intended to undermine American hegemony. The United States should exploit gaps between autocratic nations, not give them a reason to join together despite their differences. Ultimately, Biden’s Wilsonian desire to transplant American democratic systems onto other nations—ostracizing countries that fail to acquiesce—only creates a stronger anti-American bloc.

Third, Biden’s approach makes potential allies choose between the United States and China. Instituting a “with-us-or-against-us strategy” means countries must make a decision. Though this doctrine would in theory make clear who the United States can trust in times of conflict, in reality, a considerable number of countries with whom the U.S. needs partnerships to advance its interests will pick China. In the same way, Washington should seek to preserve its flexibility by recognizing that other countries also want flexibility. The Biden administration should take comprehensive commitments when it can get them, but it shouldn’t disavow limited cooperation on narrow interests.

Indeed, Biden’s democratic qualification for partner nations cannot be exclusive. Cooperation with autocracies will be a necessity whether or not that aligns with the president’s idealized vision for the twenty-first century. Fortunately, it seems the administration is willing to make these ideology-for-strategy trade-offs despite its rhetoric to the contrary. Biden has, correctly, sought to expand the Quad and deepen security ties with Australia, Japan, and India, even in the face of the latter’s trend towards nationalism, suppression of the free press, and second-class treatment of its Muslim minority under Prime Minister Narendra Modi.

But Biden’s insistence on occupying this democracy-promoting, autocracy-condemning moral high ground forces him into the awkward position of overlooking Modi’s anti-democratic policies and publicly asserting that the U.S.-India relationship is rooted in a “shared commitment to democratic values.” Rather than engaging in these rhetorical gymnastics, Washington should acknowledge, condemn, and work to improve human rights issues in India while also being honest about New Delhi’s strategic importance. With a clear line drawn between limited security cooperation and wholesale endorsement of Modi’s rule, Washington can have its cake and eat it too. While a more sober approach might limit Biden’s ability to profess a democratic world, it does more to satisfy both the administration’s moral and strategic standards.

Even among pillars of U.S. strategic security, the Biden administration’s all-or-nothing democratic rhetoric risks legitimacy-diminishing contradictions. Democratic backsliding within NATO countries has forced the alliance to reconcile this inconvenient truth. Whether intentional or not, Biden has publicly condemned the erosion of democracy within the organization to which he ensured the United States would make a glorious return, indicting then-President Donald Trump for supporting the “totalitarian regimes” of Poland and Hungary.

The reform process for the Biden administration requires substantial reframing and some uncomfortable lesson-learning. The president, especially in his public addresses and formal policy documents, should focus less on shared values and more on shared threats, concerns, and interests. Make clear that America’s allies are its allies because of their actions, not their domestic political systems. With a democratic, human-rights-protecting state, these partnerships can, of course, be more comprehensive, but Washington needs to make clear where its inherent security interests start and where its perceived role as the global moral authority ends. The administration must sideline its Wilsonian tendencies in favor of strategically sound partnerships.

Domestically, Biden must work to build consensus by shifting its rhetoric. Using the same language to describe the GOP’s policy positions writ-large (i.e., stating republicans are a fundamental “threat to democracy”) and the great powers the administration seeks to rally against risks defiance in Congress. The president can have all the right ambitions, but without a willing Congress, they may never have the necessary support to be translated into policies. There is certainly work to be done to shore up American democracy at home, but this is hardly accomplished by name-calling that undermines Washington’s foreign objectives.

To be fair, there is some domestic value to this binary democracy-autocracy framing, primarily in that it elevates China as the chief threat to U.S. interests—be they Biden’s ideological tenets or a realist’s material sensibilities. This characterization is a potential point of bipartisan, cross-theory unity: China poses the greatest risk to a democratic world and also embodies the single most potent threat to U.S. commercial and strategic interests. Divisions on particular policies will inevitably emerge, but both Biden and the Republican leadership should be able to find common ground on the importance of the China issue—both in the potential for cooperative compromise and in the instances that require a firm stance. Playing his political chips correctly, Biden can nudge even the most Republican of post-midterm Congresses to follow his lead on Beijing.