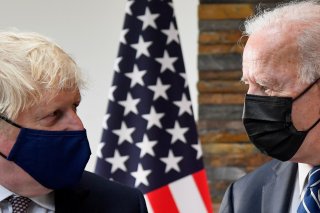 U.S. President Joe Biden’s first presidential trip overseas to the “Old World” has given teeth to the pledge he made in his first address before a global audience back in February: “America is back, the transatlantic alliance is back.”

It also seems that the Anglo-American “special relationship” is back—and better than ever.

For his trip’s first leg, Biden met with British Prime Minister Boris Johnson to sign a 604-word statement that modernized the eighty-year-old “Atlantic Charter” issued by the two leaders’ predecessors: Franklin D. Roosevelt and Winston Churchill on August 14, 1941. The revised charter has nearly double the words of the original document, but an equal amount of international importance. The declaration—like its forerunner—defines the “special relationship” for a new era against menacing rivals and threats while crafting a “vision for a more peaceful and prosperous future.”

The cosmetic similarities continue. Both men seek to emulate their predecessors. Biden has long admired Roosevelt. American political pundits frequently analogize the two presidents and wonder if Biden is the “second coming” of FDR. Johnson published a panegyric biography of his hero, The Churchill Factor, in 2014. While critics found the book wanting in historical novelty, they spotted the “obvious subtext…that Johnson is seeking to compare his own reputation as a political maverick with that of Churchill.”

After examining a historical exhibit containing copies of the 1941 charter with Biden, the British premier put a finer point on the historical parallel: “While Churchill and Roosevelt faced the question of how to help the world recover following a devastating war, today we have to reckon with a very different but no less intimidating challenge – how to build back better from the coronavirus pandemic.” In essence, the Covid-19 pandemic is Biden and Johnson’s “world war.” And the new charter is their roadmap for a post-Covid world that faces rising authoritarianism and illiberalism.

The context behind “The New Atlantic Charter,” of course, differs from the original. Britain is far less powerful. Allied powers are not fighting a kinetic war against other states (at most, China and Russia are the West’s “competitors” or “rivals”). The “special relationship” is complemented by other European democracies—unlike in 1941, when 4/7 of today’s G7 were either Axis powers or under Axis control.

An appraisal of face-value resemblances and distinctions, however, not only ignores each charter’s shared magnitude of challenges and collaborative spirit in solving them, but also overlooks one major dissimilarity and obstacle in fulfilling this revised transatlantic “vision.”

By August 1941, the United Kingdom had earnestly warred against Nazi Germany for more than a year. It survived the Dunkirk evacuation and German bombardment during the Blitz, protected merchant ships in the Battle of the Atlantic, and counter-attacked German land advancements in the Mediterranean, Balkans, and Africa. Throughout Britain’s “finest hour,” its “people held the fort ALONE,” Churchill later wrote in his wartime memoirs, “till those who hitherto had been half blind were half ready.” The “half blind” was a subtle dig at the Soviet Union and the United States, both countries who remained “neutral” in the war until Germany and Japan invaded them, respectively. Yet even before the two countries declared war on the Axis powers, Moscow and Washington’s visions of cooperation with Britain began improving when Churchill brokered a military alliance with Soviet leader Joseph Stalin on July 12, 1941, and Roosevelt signed the Lend-Lease Act in March 1941 that supplied food, equipment, and military materiel to Britain and other allied powers, making America an “Arsenal of Democracy.”

For Churchill, leased American weapons were not enough. He needed “to get the Americans into the war.” But Roosevelt habitually refused to discuss American entry or greater involvement in the conflict. The nation would remain neutral. Nonetheless, both men apprehensively watched perilous world developments, including the global rise in demagoguery, populism, and fascism as well as the general proclivity for countries to act without regard for international principles or order—facing restraints only from their finite resources and capabilities.

Anticipating eventual American wartime involvement, Roosevelt asked Churchill in late July 1941 if the two could meet “to survey the entire world position in related to the settled and common interests of our respective countries.” This appraisal could engender “a joint declaration laying down certain broad principles which should guide [U.S.-U.K.] policies along the same road.” Churchill concurred, and less than a month later the two met on August 9 and 10 aboard the destroyer USS Augusta, anchored in Placentia Bay, Newfoundland, to discuss wartime efforts and declare a postwar vision.

The two men settled on eight common principles for “a better future for the world…after the final destruction of the Nazi tyrant.” These principles included an end to “aggrandizement” and the “use of force”; respect for self-government and self-rule; equitable and global access to economic prosperity, improved “labor standards, economic advancement and social security”; and, a peace where “all men” could travel “without hindrance” and live “in safety within their boundaries” free from “fear and want.”

Eight decades later, “The New Atlantic Charter” affirms similar principles for solving “new and old challenges” and operating in a world that increasingly echoes the trends of the 1930s. It supports “work[ing] through the rules-based international order” that Roosevelt and Churchill formulated in Newfoundland while striking commitments on new issues, such as climate change, technology, cyberspace, and “health threats”—all in the same cooperative vein as the original charter.

Esther Webber and Anna Isaac of Politico recently criticized the new agreement for its “big picture promises” that were “short on any detail of how they might actually be achieved.” In that sense too, the charters mirror each other. At the time, Churchill wrote to Labour Party leader Clement Attlee that the charter was “an interim and partial statement of war aims designed to assure all countries of our righteous purpose, and not the complete structure which we should build after victory.” Biden and Johnson rightfully avoided bogging down their pithy declaration with detailed policy prescriptions. “The New Atlantic Charter” is not an intricate operating manual for future Anglo-American cooperation; it’s another roadmap.

But behind the summitry, pageantry, and congeniality of both conferences and charters, the same fear lingers: will the United States join Britain (and Europe) in countering grave threats and ensuring a responsible world order? Or will it opt to pursue an “America First” approach—as Charles Lindbergh preached in 1940 and Donald Trump practiced from 2016 to 2020? Which course the United States selects depends less on the charter or Biden and more on his political opponents.

Franklin Roosevelt “attache[d] so much importance” to the Atlantic Charter, Churchill wrote, because he believed it would “affect the whole movement of United States opinion” toward intervention. In the end, it did not. The Japanese attack on Pearl Harbor in December 1941 achieved that. But America’s growing internationalism—its “Arsenal of Democracy” and peacetime draft—can be largely attributed to Roosevelt’s 1940 presidential opponent: Wendell Willkie.

In 1940, Roosevelt sought an unprecedented third term but averred greater American involvement in the war for fear of inducing his defeat by expending too much political capital. But on the campaign trail, Willkie backed Roosevelt’s plans for a peacetime draft and a shipment of fifty destroyers to Britain. Willkie’s support quelled staunch, isolationist Republican opposition, and gave the president the political maneuverability to pursue both initiatives. To quote journalist Walter Lippmann in 1944, “Under any other leadership but his [Willkie’s], the Republican party would have turned its back on Great Britain, causing all who still resisted Hitler to feel that they were abandoned.” Roosevelt agreed. “He was a godsend to this country when we needed him most,” he told an aide.

Roosevelt signed the Atlantic Charter confident that his successors—regardless of party affiliation—would uphold its values and principles. Biden cannot be so sure today. He has reminded European leaders that “America is back at the table.” But they ask: For how long?

Under Biden, Washington will not practice a unilateral, “America First” foreign policy that slaps tariffs on allies, embraces adversaries, abrogates climate and nuclear deals, and snubs international partners—all of which Trump did as president—until at least Inauguration Day 2025. Yet the Republican Party’s continued support for Trump and his policies suggests that Biden’s promise to preserve “the rules-based international order” and American multilateralism are not guaranteed in the future—especially if Trump or a like-minded candidate (from either party) wins in 2024.

If that’s the case, “The New Atlantic Charter” won’t represent a revitalized multilateral vision for improving a post-Covid world. It will instead validate the fears of America’s allies: the United States is no longer a world leader, but just another great power.