Biden Is Going Green, Even If It Kills Us 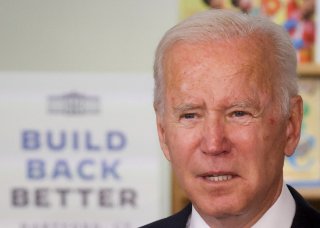 Hubris can get us all killed. The Biden administration’s determination to make its climate agenda a central factor in U.S. foreign policy could be the greatest threat to human survival in our times.

This leap into the climate-change rabbit hole has distracted the White House from the old-fashioned—but painfully present—task of making sure Americans are not devastated by a major war. By stirring partisan politics and dubious science into their recipe for national security, this administration risks getting the single most important responsibility of the federal government horribly wrong.

For starters, their climate agenda lacks legitimacy. Declaring that it is validated by “settled” science neither settles the science nor validates their agenda. The only certain outcome this agenda would produce is the most radical upheaval in how humans conduct economic and political affairs since the Russian Revolution (and look how that turned out).

In just the last decade—throughout which they have assured us they are 100 percent confident in their interpretation of climate science—we have seen scientists question—and overturn—some of the most firmly established orthodoxies in scientific consensus, from cosmological questions of how the universe works to how humans evolved. Some of these revelations are as impactful as going from thinking the world is flat to musing that maybe these round-earthers have a point. If science teaches us anything, it is to be less certain—and ever questioning—of our mastery of knowledge. This is why we must be prudent about putting all of our policy eggs in a basket woven entirely of “scientific consensus.”

Furthermore, the judgments of this administration are highly suspect. They can’t even get the science around Covid-19 right. The scientific consensus changes weekly. And a coronavirus is a lot less complicated than the global climate. But it’s not just questions of science the administration has gotten wrong. From inflation to border security, the White House insists it has all the right answers, when clearly it does not.

Moreover, the administration has habitually undermined its own credibility by making claims that even current science doesn’t support. After every extreme weather event, be it flood or tornado, the president rushes to the podium and claims it is more evidence of the need for climate action, even though there is no scientific consensus that climate change is dictating the frequency of extreme weather events. The administration can’t credibly say “follow the science” when it consistently makes claims that jump the scientific shark.
There is a near-universal consensus that safeguarding the global environment is vitally important. But the administration wrongly interprets that as support for its climate agenda. The centerpiece of the administration’s climate policy is enshrined in the president’s Build Back Better bill. There looks to be zero bipartisan support for that. The president also has scant bipartisan support for his energy agenda.

When more than half of Americans outright reject the administration’s climate agenda and most Americans want responsible environmental and energy policies, that’s pretty clear evidence that the president’s agenda is not only overly political, it’s just plain bad politics.

Despite lacking a compelling scientific case and a clumsy political agenda that looks all but moribund, Biden has made climate the centerpiece of foreign policy. And while his “whole of government” approach fixates on climate action, he is neglecting to deliver on virtually every other policy priority.

Pick a problem: Europe, the Middle East, Africa, Latin America, or Asia. In no part of the world have U.S. interests advanced since Biden took office. In fact, a fair assessment would be the administration is backpedaling in most places.

What’s happening now is similar to what would have happened if Franklin Delano Roosevelt had ignored the problems created by Germany, Italy, and Japan and instead concentrated on pushing the New Deal agenda at home and abroad. Of course, FDR did no such thing. He put his political agenda aside to deal with the existential threats at our doorstep. FDR focused on building a bipartisan consensus for his war policy, not browbeating his political opponents by calling them extremists, racists, and confederate sympathizers.

Biden needs a dose of FDR. We are in the danger zone. There are crises right in our face, from Ukraine to Taiwan to a wide-open border that could quickly spin into bigger problems. Playtime is over.

America can help safeguard our blue dot and prevent World War III. The United States, however, needs to invert its policy priorities. In these dangerous times, national security must come first. Forget about the Biden defense budget request, which didn’t even cover the cost of inflation. We need to rapidly build up both conventional and strategic deterrence.

The United States needs to lean forward to protect America’s interests and challenge the destabilizing actions of China, Russia, and Iran, not push them to the back burner, treating them as annoying distractions from the “real” business of government: Going green, even if it kills us.

The White House can have a responsible climate agenda that supports rather than detracts from responsible foreign policy. For starters, the United States would be in a far stronger position to lead the transition to a global green economy and be a driving force in the global energy sector by being energy independent. Rapidly dismantling Biden’s wrongheaded, politically-inspired energy and environmental policies would do the trick.

Biden has been like Alden Pyle in Graham Greene’s The Quiet American: supremely confident that he knows what is best for the world, even as the world proves him wrong. Hubris is always the worst foreign policy. Like Pyle, Biden could use a little more humility. He could also use a more prudent and responsible foreign policy.