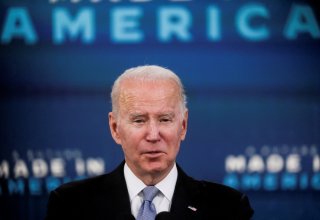 On February 11, President Joe Biden issued an executive order regarding the Afghanistan Central Bank’s funds. This exercise in autocratic, superpower muscle-flexing delivers yet another blow to the struggling civilian population of Afghanistan. The order is ill-informed, unjust, and damaging to vital U.S. interests—and it will have devastating consequences.

With the stroke of a pen, Biden decided that the $7 billion of Afghan funds invested in the U.S. Federal Bank would not be returned to Afghan’s Central Bank. Instead, it would be divided in two, with half going to compensate 9/11 families who had been suing the Taliban for colluding with Al Qaeda and the other half going to humanitarian aid.

Some context is necessary to put this in perspective. During the twenty-year U.S. intervention in Afghanistan, the United States did build some institutions for modern governance, and one of them was the Afghan Central Bank, the Da Afghanistan Bank. It was modeled on the U.S. Federal Reserve and a sound banking law guides its operations. Its role is to regulate the country’s banking system and oversee the other banks; run the currency exchanges; and manage the country’s assets, which includes investing and depositing them in U.S. and European banks. At present, the Afghan Central Bank has some $7 billion invested in U.S. bonds, in gold, and in savings accounts. Another $2 billion is similarly invested in European banks.

When the Taliban took control in August 2021, the U.S. government used a pre-existing sanctions regime to freeze the Federal Reserve assets. Formerly, the Central Bank used to draw on the assets monthly to ensure liquidity and to stabilize the exchange rates. The freeze, together with the sanctions, meant that within weeks the Afghan economy was in free fall. Inflation soared. People could not withdraw their savings. Salaries could not be paid. Investments became impossible, as did trade. Businesses went bankrupt. Corrupt members of the previous regime had transported so much cash out of the country that there was a shortage of afghanis, the country’s currency. But more could not be obtained because the company that prints them, based in Europe, had to obey U.S. sanctions. And all of this was happening just as an especially harsh winter and an extended drought meant that food and fuel were in short supply and prices were rising steeply.

The first problem with this executive order is that it disposes of money on the assumption that it belongs to the Taliban. But it does not. It belongs to the Afghan people, many of whom have their life’s savings invested in their Central Bank. We should also be clear that it is not their fault that the Taliban are in control. The present Taliban rule is the outcome of a poorly conceived and badly executed twenty-year social engineering experiment by the United States, accompanied by a war-fighting strategy that failed, and culminating in a chaotic exit.

Another problem with Biden’s order is that it entirely misconstrues the purpose of a national reserve. It is not some slush fund that you can hand out to non-governmental organizations (NGOs) for humanitarian aid or use to settle court cases. It’s the backbone of a country’s fiscal stability.

By rights, the assets of the Afghan Central Bank should not have been frozen in the first place, or if they were—as a precaution—they should have been unfrozen as soon as it became clear that the bank was continuing to function as it did prior to the Taliban takeover. Except for a titular Taliban head, the Governing Board remains the same. The Taliban have made no effort to interfere with the bank’s operation, change the Banking Law or access the gold that remains in the bank’s vaults.

Unfreezing the assets need not mean just handing over all the money at once. A plan proposed by Afghan and other banking professionals is to release the money over time in increments of $250 million a month, and to monitor exactly where that money goes and what is done with it. The moment anything seems improper, the freeze could instantly be reinstituted.

Instead, Biden decided to make his own unilateral disposition of these funds, a decision that has been denounced by the Central Bank and, judging from social media, has infuriated Afghans both inside and outside the country.

Regarding the $3.5 billion to be set aside to satisfy a lawsuit brought by a group of 9/11 families, it is worth noting that 9/11 victims have received significant compensation already, over $2 million per lost relative, and that other 9/11 family groups oppose this lawsuit. Let’s also recall that there were no Afghans among the 9/11 hijackers (fifteen of the nineteen were from Saudi Arabia), and now, twenty years later, the majority of Afghans were not even born yet in 2001 and certainly bear no blame.

And what about the other half of the assets, $3.5 billion, that is, per the Biden dictum, designated for humanitarian aid? Won’t that help the Afghan people?

It’s hard to decide whether this is best answered as an ethical or a mathematical absurdity. Ethically, what could be more cynical than to steal what literally is someone’s life savings on the grounds that you are giving some of it to a charity that will be dispensing handouts to them?

As for the math, the NGOs that are the intended beneficiaries of Biden’s misappropriated largesse have notoriously high overhead. They pay Western salaries, require security and translators and fixers and armored cars and offices, fly in and out from the United States and Europe, and prefer to work in Kabul to avoid the difficult rural areas. According to the Special Inspector General for Afghanistan Reconstruction (SIGAR), a U.S. government watchdog agency, overhead typically accounts for a whopping 75-80 percent of their total budgets. It’s hard to conceive of a more inefficient way of getting food to hungry Afghans.

Has the Biden administration learned nothing from the last twenty years? Consider the White House Fact Sheet explaining this executive order. It says:

Even prior to the events of last August, Afghanistan’s economy was on the brink. Afghanistan faced poverty rates above 50 percent. International donor grants financed about 75 percent of public expenditures and 50 percent of the government’s budget … Rampant corruption crippled sectors that should have been profitable … These problems reflect longstanding, structural issues that predated the events of August 2021 and have worsened due to uncertainty and perceived risk surrounding the Taliban’s capacity to run the economy.

But prior to last August, who was in charge? The U.S.-backed, U.S.-supported, and in large part U.S.-engineered Afghan government. Has the White House forgotten this? If there was “rampant corruption” and the economy was plagued by “long-standing, structural issues,” then these happened on our watch! Afghanistan’s economy “prior to last August” was funded, structured, and managed by U.S. Agency for International Development, the World Bank, and the “international donors” who basically subsidized the country. If there is one lesson we can take away from that, it’s that we do not know what is good for Afghanistan and should not be running it. Yet this is exactly what Biden has now perpetuated and exacerbated, except now, he’s taking away the savings of Afghan citizens to do it.

While the White House asserts that its plan is “for the benefit of the Afghan people and for Afghanistan’s future,” Afghanistan’s future is certainly not best served by making it a permanent charity case and aid recipient. Instead, if Afghans’ own assets were returned to the country’s economy, they could fund an organic postwar recovery in which merchants can once more trade, small and large businesses can reopen, homes and shops and businesses can be rebuilt, farms can be readied for the next planting season.

Alternatively, letting Afghanistan slide into total economic and social ruin will have devastating consequences. Terrorist groups typically recruit young men who have no other means of livelihood. If they can’t earn wages, young Afghans will be vulnerable to recruitment by ISIS, or they will join the one million who have already crossed the border into Pakistan, Uzbekistan, and Iran and who will eventually try to get into Europe as refugees. In the name of benefiting the 9/11 families, we will be seeding the ground for the next 9/11.

This disastrous decision needs to be stopped in its tracks.

We call on legal professionals and law firms to review and challenge the legitimacy of this order.

We ask the international humanitarian aid and NGO community to refuse receipt of this money and call on other countries and institutions not to cooperate in the implementation of this unjust order.

We call on the 9/11 families who are party to this lawsuit to reconsider whether they truly want to profit from a decision that harms the lives of 40 million Afghan men, women, and children.

Finally, we call on the American people, regardless of any party affiliation, to let the White House and your representatives in Congress know that you are appalled by this decision and call for it to be rescinded.