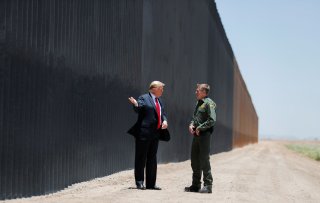 Immigration was largely absent from the 2020 campaign, so millions of Americans voted for Joe Biden in November without really knowing what his immigration policies would entail.

With April 30 marking President Biden’s one hundredth day in office, the Center for Immigration Studies has prepared a comprehensive review of the Biden administration’s immigration actions. As expected, the new administration moved quickly to reverse numerous Trump policies, creating an immediate impact on the border, and elsewhere.

On Day One, Biden took three steps that had far-reaching effects: he cut off funding to build the border wall that he voted for in 2006 as a senator (along with Barack Obama and Chuck Schumer), announced a one-hundred-day deportation freeze, and stopped processing new aliens through the “Remain in Mexico” program. As the name of that last program implies, under Remain in Mexico illegal aliens apprehended at the southern border who claimed asylum were required to wait in Mexico for their court hearings instead of being released into the interior of the United States, where many of them would have disappeared.

In its haste to undo the policies of its predecessor, this trifecta of moves alone sent a clear signal to the coyotes, drug cartels, and economic migrants: the border is open and U.S. immigration law will not be enforced except in the rarest of instances. Combined with the subsequent decisions to resume catch-and-release and to stop using Title 42 emergency health authority to turn away unaccompanied minors and most families, the Biden administration quickly turned a relatively stable situation at the southern border into a crisis.

Illegal aliens responded to these Biden changes in droves. In February, U.S. Customs and Border Protection apprehended 101,028 aliens, and in March it apprehended 172,331—a 70 percent increase in just one month. Within the March number, nearly nineteen thousand of those apprehensions were unaccompanied minors, representing the highest monthly total ever recorded.

The cruelty of these policies cannot be overstated. The Biden administration’s policies are enticing parents—few of whom are actually eligible for asylum—to sell off their possessions and take out loans to pay smugglers to get them to the U.S. border. The trek is dangerous and children are subjected to physical abuse and mental trauma. The Biden administration has unwittingly entered into a partnership with the drug cartels and coyotes to exploit these economic migrants.

As the border situation continues to worsen, the Biden administration is more focused on semantics than solutions—is it a “challenge” or a “crisis”? Border czar Roberta Jacobson resigned unexpectedly and co-border czar (or whatever her title is) Vice President Kamala Harris has yet to even hold a press conference about the border crisis, much less offer up any plan to solve it. Biden tapped Harris for this task weeks ago, yet there appears to be no urgency coming out of the East Wing.

A critical observer may wonder if the new administration is unable or unwilling to regain control of the southern border.

The situation in the interior of the country isn’t much better. While a federal district judge issued a nationwide injunction blocking Biden’s one-hundred-day deportation freeze, the ruling does not mean anyone will get deported; that’s because the acting ICE director issued new priority enforcement guidelines which exempted virtually all illegal aliens from enforcement. Internal figures seen by the Wall Street Journal confirmed this fear: In February, Biden’s first full month in office, ICE arrested fewer than half as many aliens with criminal convictions as in December, Trump’s final full month in office. American communities are less safe under Biden.

Biden’s first one hundred days have shown the results of his immigration agenda. How many of his voters are experiencing buyer’s remorse?

Robert Law is the Director of Regulatory Affairs and Policy for the Center for Immigration Studies. His prior position was chief of the Office of Policy and Strategy at U.S. Citizenship and Immigration Services in the Department of Homeland Security.