Biden Must Build a New Status Quo on Taiwan 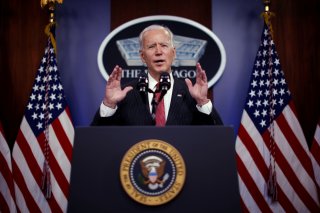 This time, President Joe Biden left no doubt: U.S. troops will defend Taiwan in the event of a Chinese invasion, Biden declared on 60 Minutes. Biden’s fourth time making such a statement, this time with greater clarity than ever, represents a clear break from the longstanding U.S. policy of “strategic ambiguity” regarding whether the United States would defend Taiwan from a Chinese attack.

How did we get here? As Paul Heer wrote recently, Taiwan is “caught in a historical trap that Washington and Beijing created” nearly half a century ago. In effect, over the past four decades, U.S. policy towards Taiwan has been a subset of U.S. China policy. We should therefore be clear-eyed about why the United States, in derecognizing the Republic of China (Taiwan) and severing its defense treaty, moved towards the Chinese position. Why did the United States, which had been Taiwan’s treaty ally since 1954 and instrumental to its survival since the Korean War, shift its position to align more closely with China’s preferences? Why consign Taiwan to the liminal legal status it has occupied ever since?

With Kissinger and Nixon as the primary architects, the answer is, unsurprisingly, realpolitik. At the time, securing China’s split from the Soviet Union provided significant leverage against what was then America’s primary rival. Closer relations with the People’s Republic of China (PRC) also offered the possibility of U.S. disengagement from the war in Vietnam on better terms. Moreover, China was weak in the 1970s, exhausted from a decade of the Cultural Revolution. Partnering with China represented an opportunity to strengthen the U.S. position—at Taiwan’s expense—with the added benefit that China appeared far from capable of credibly threatening Taiwan. The 1979 Taiwan Relations Act (a domestic act not involving any other nation-state) was itself a reaction to Congress' alarm at how far America’s goalposts were moving in China’s direction. Recognizing the “the Government of the People’s Republic of China as the sole legal Government of China” and acknowledging “the Chinese position that there is but one China and Taiwan is part of China” was quite alarming to many members of a Taiwan-friendly Congress.

The birth of this "One China" policy during that Cold War context, when the Soviet Union was America’s primary geopolitical rival, made perfect sense. Now that China is America’s primary geopolitical rival––an economic competitor on a scale far surpassing anything the Soviet Union ever achieved––the U.S. government clearly, and in many respects quite logically, no longer feels that the One China policy represents its interests. This is particularly manifest in Biden’s declaration that “Taiwan makes their own judgements about their independence.” If Taiwan can make its own determination about its independence, and if the United States pledges to send troops to defend Taiwan in the event of a Chinese attack (which many analysts believe would be triggered by a Taiwanese declaration of independence), then U.S. policy looks quite a bit more like a “one China, one Taiwan” policy than a “One China” policy.

If the United States had articulated its policy toward China and Taiwan in this manner, China almost certainly would not have agreed to the normalization of relations. Indeed, the third joint communique of 1982 affirms that “the United States Government attaches great importance to its relations with China, and reiterates that it has no intention of infringing on Chinese sovereignty and territorial integrity, or interfering in China’s internal affairs, or pursuing a policy of ‘two Chinas’ or ‘one China, one Taiwan.’” The movement closer to U.S. support for Taiwan independence championed by former senior Republican officials such as Mike Pompeo and Mark Esper, along with Biden’s recent comments, indicates that the U.S. government is flirting quite explicitly with a one China, one Taiwan policy, which would certainly depart from the foundational understanding struck between the United States and the PRC in the 1970s.

There are many outstanding reasons to champion Taiwan’s defense. It is a vibrant society whose economic, democratic, and constitutional success stories provide inspiration around the globe. Yet this was not why the U.S. government supported Taiwan from the outbreak of the Korean War (including becoming a treaty ally in 1954) until severing relations in 1979, when Taiwan was a single-party authoritarian state. It was, rather, because Taiwan serves as a key node in the U.S. defense perimeter in the so-called first-island chain, from the Aleutian Islands to the Philippines.

This practical, geophysical reality, as well as the geopolitical stakes of U.S. credibility to its other allies in Asia, is what is pushing the United States to revisit the foundational basis of its relationship with China, the world’s second-largest economy. Only an island of such tremendous significance could cause the United States to consider revising its status-quo agreement with China, along with all the risks such a course entails. In the face of China’s rise, Taiwan has such significance, which is why Elbridge Colby, former deputy assistant secretary of defense for strategy and force development, writes with Jim Mitre that “the defense establishment should focus on preparing the military for a Taiwan scenario above all others. The United States needs to be able to effectively defend Taiwan because it is important to frustrating China’s strategy to achieve hegemony in Asia.”

Status quos are made to be broken. New realities make old agreements obsolete. In the intense competition between the United States and China, it is logical that Washington should now throw its weight behind Taiwan, provided it has the weight and the will to throw. But given the immense stakes of entering these uncharted waters, as well as intense nationalism in both China and the United States, it may make just as much sense to begin discussions about what kind of new, sustainable understanding might be reached between the three capitals. Better this candor than sleepwalking ahead towards war, all the while denying any movement is happening. Perhaps even Taiwan can be safely removed from the historical trap set by these great powers over four decades ago.

Brendan Flynn has been studying for his Ph.D. at Wayne State University since 2020, where he concentrates on international relations with a focus on China and Asian security. From 2015-2016, Brendan studied Chinese in Beijing, before researching Asian maritime disputes as an intern at the Center for Strategic and International Studies (CSIS) in Washington, DC. He is currently a Boren Fellow studying in Taipei, Taiwan.