Biden Must Reestablish U.S. Authority in the Balkans 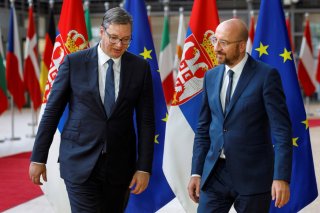 Fourteen months ago, Kosovo and Serbia signed the Washington Agreement at the White House.

It was a major step forward for peace and prosperity in the Balkans following a decade of effective U.S. absence—the last American intervention was in support of the 2008 declaration of an independent Kosovo, arguably the only successful U.S.-led nation-building project of the last thirty years.

Over the last decade, under the European Union’s (EU) so-called “leadership,” relations between countries in the region have worsened, and, during the Biden presidency, U.S. authority in the region has flatlined.

The Washington Agreement is the first and only real treaty signed between Serbia and Kosovo. It included economic cooperation, border demarcation, and plans to build transport links between the two countries. The agreement’s execution seemed to be a clear sign that America was back in the Balkans; It was an indication that Washington was taking charge of a peace process neglected by European authorities, who did little to advance positive relations between the nations.

While Serbia claimed that signing the accord did not mean they recognized Kosovo as an independent, sovereign state—that is precisely what it meant. One does not sign a treaty with a country that doesn’t exist.

One year later, and with America nowhere in sight, the agreement appears to have been a mirage. America’s once substantial presence has vanished; European influence is ascendant.

Today, Serbia, long the aggressor, has returned troops to the border between the independent countries and patrols the boundary from the sky with Russian-made fighter jets—it’s a troubling sight.

If Serbia’s border provocations were insufficient to stoke tensions, a Kosovar government building in an ethnically Serbian part of Kosovo was deliberately torched in a double grenade attack stemming from Kosovo’s insistence on reciprocity in vehicular license plate registrations for border crossings.

EU oversight has proven an unmitigated mess for the rule of law in Kosovo. And a prevailing European bias that favors Serbia—which increasingly resembles a one-party authoritarian state—can be expected to further erode trust and therein damage Kosovo’s independent, multi-party democracy in the years ahead.

Just how far the Europeans are prepared to go when it comes to interfering in Kosovo’s governance is clear to those following the events since the execution of the Washington Agreement.

At The Hague in the Netherlands, where the EU funds international courts, the first trials have commenced at the “Kosovo Specialist Chambers” (KSC).

Charges were brought against Hasim Thaçi, Kosovo’s liberation hero and former president, and others for alleged war crimes. In another case, two veterans of the Kosovo Liberation Army (KLA) were charged with making public allegedly confidential documents leaked by the KSC Special Prosecutor’s office, the very entity now putting them on trial.

There has been no investigation into how, why, or who leaked the sensitive information nor has there been an investigation of the Kosovan media who published its contents. The former KLA veterans who are being prosecuted received the leaks. This smells like a set-up.

This situation is unsurprising given that the EU has serious internal challenges to its own rule of law; perhaps it cannot manage to support normal legal practices at an international court that it finances.

But this is not about the law; it’s about EU influence in the Balkans. This much was made obvious in the Bulgarian president of the Kosovo Court’s brief of a meeting of EU ambassadors wherein she explained not only what charges would be brought but also when convictions could be anticipated for those in the dock. To be blunt: The EU appears to be leveraging the KSC to eradicate Kosovo liberation leaders from their nation’s politics.

Europeans give no justification for why they should be trusted in the Balkans, and the Biden administration shows no signs of re-engaging with the region, but U.S. officials must engage once again.

What U.S. officials need to grasp is that America not only ushered Kosovo into existence but also brought about a multi-party democracy in a region with no history of one.

By recommitting itself in the Balkans, the United States can salvage its only nation-building success of the last thirty years before it succumbs to American indifference and European illegitimacy.

Prof. Ivan Sascha Sheehan is the executive director of the School of Public and International Affairs at the University of Baltimore. Opinions expressed are his own. Follow him on Twitter @ProfSheehan.