The Biden Presidency: Sinking but Not Sunk 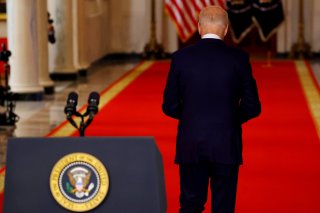 Washington is a town that feeds on shock headlines. But when calmly considered, few of the shocks are really surprising. In fact, most of the dramatic political twists and turns that drive our daily news feed are downright predictable. This is certainly true of the personal decline of Joe Biden, hand-in-hand with the institutional decline of his presidency.

Should we really be surprised that, as political reporter Jennifer Harper recently pointed out, polls “from NBC News, ABC News/Washington Post, National Public Radio, PBS, Washington Consult, IPSOS, IBD/Tipp, YouGov/Rasmussen Reports, Quinnipiac University and Saint Anselm College” all have found Mr. Biden with the most unpopular ratings yet in his presidency? Or that a mainstream mainstay like The Hill now reports that “Biden’s sagging approval ratings, especially among independents, are raising questions about his ability to move his agenda through a House and Senate where centrist and liberal Democrats are battling one another”? Or that an adamant Never Trumper like New York Times columnist Bret Stephens, who actively supported the Delaware Dodderer in the 2020 election now laments that Biden has revealed himself as “headstrong but shaky, ambitious but inept”?

Shortly after Mr. Biden was sworn in, I wrote a column for The American Conservative suggesting that the “big question is how much Biden will be in charge of his own administration.” I pointed out that Joe Biden, who had “grown rich in a lifetime spent on the public payroll, switching policies and principles with each shift of the political winds” was, in many ways, the ultimate political hack, “a man with no philosophy but with a bottomless appetite for big government and an unquenchable thirst for applause. He is a fake, but he is a sincere fake, really believing everything he says while he’s saying it.”

In the eyes of the voters, I suggested, “this gave him a crazy kind of authenticity they never attributed to Hillary Clinton, probably why he succeeded where she failed.” And I asked if “this elderly, increasingly brain-fogged old machine politician [will] simply sign off on the left-wing agenda that the slender Democratic majorities in the House and Senate will desperately try to ram through in the early months of his presidency? Or will he follow up on his rhetorically conciliatory stance [in his inaugural address] with real efforts to govern and lead as something more than a rubber stamp for Chuck Schumer and Nancy Pelosi?”

The answer to that question, if it was ever in doubt, is now painfully obvious. Joe Biden—or the senior White House clique responsible for his care and feeding—has opted for the purely partisan, rubber stamp route. They have set a leftward course that has increasingly found their administration at odds with American public opinion. Thanks to this, and to their incredibly cynical, inconsistent, and bumbling handling of the Afghanistan fiasco, they have put their vessel in danger.

The Biden presidency hasn’t sunk yet, but it is sinking fast and no one on board seems to know what to do about it.

For those of us who were first-hand witnesses to the unmaking of the Carter presidency two generations ago, this comes as no surprise. Then, the liberal mainstream media that had done everything it could to defeat Republican Jerry Ford by building up candidate Jimmy Carter, soon turned on him because he wasn’t liberal enough, wasn’t enough of a Washington insider, and, most of all, because—fairly or unfairly—they decided that Jimmy Carter was a klutzy loser.

I had all this in mind when I concluded my column about the Biden inauguration by predicting that, “Now that they’ve driven Donald Trump from office, the mainstream media will be covering a Washington political scene in which the executive branch, the Senate, and the House of Representatives are all controlled by the Democratic Party, as was the case after Jimmy Carter’s election in 1976. While Washington journalists would much rather devour Republicans than Democrats, like sharks in a feeding frenzy, they will attack their own when there’s nothing else left to eat, as Jimmy Carter soon discovered.”

Once again, the media sharks are circling. It’s feeding time on the Potomac. And this time the main course is Joe Biden.