Biden Is Weak on China 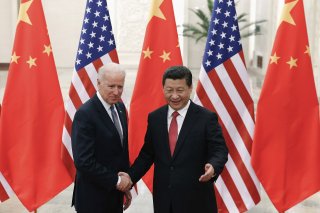 President Barack Obama’s first Secretary of Defense, Bob Gates, wrote what could ultimately form the perfect epitaph for former Vice President Biden: “Joe is simply impossible not to like. . .  . Still, I think he has been wrong on nearly every major foreign policy and national security issue over the past four decades.”

This Cal Ripken-like streak of unbroken erroneousness is remarkable:

Biden thought the removal of the Shah of Iran amid the 1979 Islamic revolution was a step in the right direction for human rights.

He opposed the Reagan defense buildup that helped the free world win the Cold War.

He voted against the Gulf War, which was a great success.

He voted for the Iraq War, which was not.

Biden also opposed the raid in which U.S. forces killed Osama bin Laden—arguably the only solid foreign policy accomplishment of the eight-year administration of which he was nominally second in command.

However, some of Biden’s greatest strides toward being in the wrong center around China. This is topical, because his aides and supporters are eager to reconstruct him as tough on China given strong voter sentiment against the Chinese government amid the Wuhan coronavirus pandemic.

With his long tenure in Congress, Biden was present at the creation of the policies that exported U.S. manufacturing to China and set the stage for Beijing to rob us of technology and undertake a high-tech military buildup. Specifically, Biden was a driving force behind giving China “permanent normal trading status” in 2000, which helped Beijing win admission to the World Trade Organization. It is from this privileged vantage that China has pursued fundamentally unfair trade practices while hypocritically parroting language about free trade and inducing our elite to do the same.

During the debate, Biden captured the essence of the soothing fiction for abetting China’s rise: “This growing prosperity for the Chinese people, in turn, has put China on a path toward ever-greater political and economic freedom.”

Biden also said of the foremost alternative economic model to capitalism and free markets in the world: “They have been forced to acknowledge the failure of communism, and have conceded the irrefutable superiority of an open market economy.”

But most devastating—and ready-made for an anti-Biden campaign commercial—was his flippant dismissal of the economic carnage he was unleashing: “Nor do I see the collapse of the American manufacturing economy, as China, a nation with the impact on the world economy about the size of the Netherlands’, suddenly becomes our major economic competitor.”

Oops. As it turned out, the world’s most populous country, run by a despotic, kleptocratic, and belligerent government, was a more formidable threat than Holland.

Of course, the debates of the early twenty-first century might seem like ancient history to some voters. For them, Biden offers much fresher conduct on China to ponder.

The Obama-Biden administration at varying points declared it would “pivot” our strategic focus and military power to Asia. This language was later modified to “rebalancing” to Asia, prompting some wags to proclaim a policy of “repivulance.” In reality, it was just a rhetorical cover for that administration’s attempt to withdraw rapidly from the Middle East, which proved a boon to ISIS and Iran, and yet somehow left us entangled in Iraq and Syria.

While the Pentagon added forces in the Pacific that included part-time rotations of Marines to Australia and Littoral Combat Ships—the Navy’s Edsel—to Singapore, the Obama-Biden administration would leave a military posture in the Pacific in 2017 that was weaker than the one it inherited in 2009.

Speaking in 2013, Biden told a foreign leader, “I want to make one thing absolutely clear: Obama’s decision to rebalance to the Pacific basin is not in question. The United States never says anything it does not do.” Unfortunately, no one believed this absurd statement, least of all the Chinese.

More recently, on the campaign trail, Biden rambled of China: “I mean, you know, they’re not bad folks, folks. But guess what, they’re not, they’re not competition for us.” Meanwhile, Gallup revealed in March that only 33 percent of Americans held a favorable view of China, down from a recent high of 53 percent in 2018.

Biden’s weak record on China contrasts negatively with that of President Donald Trump, who has successfully pursued a trade war against Beijing. This led to a deal earlier this year that left in place tariffs on more than half of Chinese imports—tariffs that Biden refuses to say he will continue if elected.

Trump and his aides have fought Huawei and other Chinese instruments of cyberwar that seek to dominate telecommunications and data, and he has begun the difficult process of extracting the U.S. military from playing cowboys and Indians in Middle East backwaters to deter strategic threats like China.

Meanwhile, Vice President Mike Pence, Secretary of State Mike Pompeo, and Matt Pottinger, the deputy national security advisor, have talked up human-rights concerns in China and asked whether the Chinese people might like an accountable government with the rule of law. This robs Democrats of the human-rights issue they held dear from the Jimmy Carter administration until it was cashiered by Obama and Biden.

As the coronavirus crisis passes, Americans are likely to turn to retribution and steps to end America’s vulnerability to China. Does Biden have a leg to stand on?