Is Biden's Visit a Last Chance for Turkey and America? 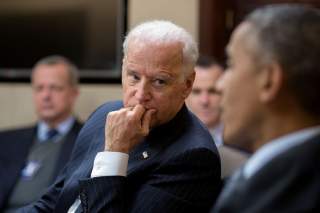 Vice President Joe Biden will be visiting Turkey at a time when the aftermath of the coup attempt on July 15 has reiterated deep anti-Americanism in the country. There are four reasons for this mood. The Turkish public and officialdom believe that U.S. Secretary of State John Kerry’s initial response to the coup, when he called for “peace and continuity,” betrayed the expectation of an “Egyptian-like outcome.” The leadership has also stated that the White House statement, finally in defense of Turkish democracy, arrived only after it seemed like the coup attempt was failing. Added to all this is the fact that Fethullah Gülen, the alleged mastermind behind the coup attempt, resides in rural Pennsylvania. These very quickly fed into a narrative that the United States either must have known about the plans and did not inform the Turkish government of the pending coup, or was actually directly involved in it. A former chief of staff of the Turkish military has also remarked that such a coup attempt would not have been realized without CIA’s assistance. Lastly, Washington insists that Gülen’s extradition hinges on whether Turkey can produce enough evidence that connects him to the coup attempt—a precondition that is aggravating Turkey’s sense of betrayal.

Anti-Americanism in Turkey is not a new phenomenon. Pew public opinion surveys show that Turks traditionally have an unfavorable view of the United States. However, this has not prevented both sides from working together on a wide range of issues in the past, despite the ups and downs in bilateral relations. For example, both Bill Clinton and Barack Obama received standing ovations for their addresses to the Turkish parliament in November 1999 and April 2009, respectively. The current situation is particularly unique, because relations are trapped in clashing perspectives or a dialogue of the deaf.

Turks want to know why Western leaders and media failed to express any empathy with the trauma their country suffered through, and why they are reluctant to applaud the public’s stunning defense of Turkish democracy. Instead, the West lends emphasis to the scale of purges and detentions that have taken place since. The New York Times, for example, has calculated that the scale of the post-coup purges would correspond to revoking the licenses of every third teacher in private elementary and high schools across the United States; taking nearly every fourth officer in the U.S. Army into custody; suspending every state judge in California, Texas, New York and Georgia; and firing nearly every third employee of the U.S. Department of Education. Not surprisingly, this casts a shadow over the rule of law and human rights in Turkey.

Furthermore, many in the West also try to understand the rift between Gülen and Erdoğan, since  they used to be in a “symbiotic” relationship. Also Erdoğan’s identification of the coup attempt as a “gift of God” has even led The Washington Post to put forward that the president “mounts his own political coup” to get rid of his opponents. Additionally, as a prominent Turkish columnist has pointed out, the contemptuous language Erdoğan has recently employed towards the West also prevents Western audience from fully appreciating what transpired in Turkey.

Both sides, however, need to make an extra effort to end this dialogue of the deaf. Geostrategically, it would not serve Western interests to lose Turkey when the Western form governance is being challenged both internally and externally. Turkey should not solely be perceived as a mechanism to curb the flow of Syrian refugees to Europe and a source of more “boots on the ground” in the fight against ISIS. Until recently, Turkey was a bastion of stability and a pole of prosperity in its neighborhood. Imagine what Western security and prosperity would look like if Turkey was not a member of NATO; if it did not have a Customs Union with the EU; and did not have interactions it has had with the West. This is why a an expert on the Turkish military calls attention to how Putin is waiting on the sidelines to see how this tension will play out, and which way Turkey’s relations with the West, or more specifically with NATO, will go.

Conversely, Turkey needs to recognize the benefits it derives from being part of the Western alliance and stop chasing conspiratorial ghosts. Blaming the West does not change the state in which Turkish national security is in, with bombs going off almost on a daily basis. As the Turkish Prime Minister, Binali Yıldırım said, the need “to earn more friends than enemies” should take precedence. This understanding has already led to some recalibration of Turkish foreign policy towards Israel, Syria and Russia. These are welcome steps, but Russia is not Turkey’s best friend. It has annexed the territory of a neighbor; its proxies are occupying territories belonging to two of its neighbors, and—in one case—those forces are a stone’s throw away from the Baku-Tbilisi-Ceyhan oil pipeline—a pipeline that is strategically critical for Turkey’s economy and security. Russia exacerbates the destruction and violence in Syria, and it is very likely that Turkey will be a target in the Russian cyber warfare, if it has not been already. This does not mean that Turkey should not have cordial relations with Russia, inspired by the once-guiding principle of “zero problems with neighbors,” but it should avoid seeing Russia as an alternative to the West. Worse would be, of course, to dream of imperial ambitions alongside Russia, as an advisor to the Turkish president  once advocated.

Biden’s visit offers an opportunity for both sides to reconcile these differences. The United States needs to stop looking at Turkey through the lens of the fight against ISIS and remember that Turkey is a long-standing ally—albeit a difficult one—of the West. It has been an important security, political and economic partner that has helped the United States address and tackle numerous challenges in Turkey’s neighborhood and beyond.

The well-being and national security of such an ally inevitably affects the American well-being and security too. For instance, Washington should recognize that Syrian crisis now undermines Turkey’s security and stability; in fact, it is not only ISIS, but the broader situation in Syria and Iraq that is hurting Turkey. Turkey continues to host and look after close to three million refugees that still need to be integrated into Turkish society. There is also the PKK that has become an existential threat since it chose to abuse the government’s goodwill by turning many cities and towns in the southeast into armed, booby trapped fortifications. This instability hurts Turkey economically too—which explains, at least partially, the importance attributed to mending the rift with Russia. The United States needs to show interest in not just fighting ISIS but take a much more holistic approach and use the visit to reiterate a commitment to Turkey’s stability, security as well as economic well-being. Biden could do this by lending his unequivocal support to Turkey’s elected government, condemn the coup instigators and extend assistance to Turkey as a critical member of the Western alliance that is going through a rough patch. This would go along way to reinstate trust and help efforts to salvage U.S.-Turkish relations.

In turn, Turkey should recognize that detaining and removing more than eighty thousand people as culprits of the coup does seem like an exaggerated reaction that is difficult to reconcile with the rule of law. It is this picture that heightens sensitivities for upholding standards of rule of law in any extradition case rather than any sort of desire to protect coup instigators. Many also question how the thousands of posts that have been vacated in the Turkish military, judiciary, police and other civil society institutions will be filled and by whom. As a former two-star general pointed out in a personal letter to the Turkish president, these appointments need to be transparent and meritocratic, and not based on sectarian connections. He also underlines the importance of making sure that those who worked closely with Gülen in defiance of the rule of law should also be held accountable. Signaling to the international community that accountability, transparency and rule of law will be respected would be the surest way of gaining the cooperation of the United States and the EU in going to the bottom of who was behind the coup attempt. After all, these are the very values that Turkey held in esteem until a few years ago when Turkey enjoyed stability, security and prosperity. As a Turkish foreign policy expert remarked, the commitment to these values emerged at least partly because “The United States has had a historical role in the Turkish multiparty system and democratic evolution.” Hence, it will be important for Turkish leaders to engage Biden as a partner to strengthen Turkish democracy and not treat him as a conspirator that aspired to wreck it.