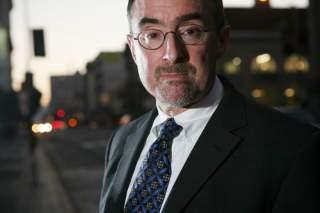 In short, Wilentz, Packer and Kinsley are a dismal advertisement for the current state of mainstream liberal thought in America. The fundamental problem is not that they’re disagreeable to their opponents (who can certainly be disagreeable themselves). It isn’t even that their unpleasantness is hypocritical (although it surely is). It is that the unpleasantness and hypocrisy conceal an intellectual void. When the screen of misrepresentations, elisions, prevarications, misleadingly curtailed quotes, historical grudges and ad hominem attacks is removed, there is nothing behind it.

This absence is all the more depressing because Wilentz, Packer and Kinsley are probably as good as it gets. There are no prominent national-security liberals who have done better—and a few who have done worse, lapsing into baroque conspiracy theories. Their failure is not simply a personal one. It’s the failure of an entire intellectual tradition.

WHY DO national-security liberals have such a hard time thinking straight about Greenwald, Snowden and the politics of leaks? One reason is sheer laziness. National-security liberals have always defined themselves against their antagonists, and especially their left-wing antagonists. They have seen themselves as the decent Left, willing to deploy American power to make the world a happier place, and fighting the good fight against the knee-jerk anti-Americans.

This creates a nearly irresistible temptation: to see Greenwald, Snowden and the problems they raise as antique bugbears in modern dress. Wilentz intimates that Greenwald is plotting to create a United Front of anti-imperialist left-wingers, libertarians and isolationist paleoconservatives. Packer depicts Greenwald and Snowden as stalwarts of the old Thoreauvian tradition of sanctimonious absolutism and moral idiocy. Kinsley paints Snowden as a conspiracy-minded dupe and Greenwald as a frustrated Jacobin.

Yet laziness is only half the problem. A fundamental inability to comprehend Greenwald and Snowden’s case, let alone to argue against it, is the other half. National-security liberals have enormous intellectual difficulties understanding the new politics of surveillance, because these politics are undermining the foundations of their worldview.

Since September 11, 2001, surveillance has been quietly remaking domestic politics and international relations. The forces of globalization, which rapidly accelerated during the 1990s, made travel, trade and communication far easier and cheaper between the advanced industrial democracies and a key group of less developed countries. The 9/11 attacks exposed the dangers of interdependence. Domestic-security agencies sought—and usually got—vastly expanded resources, allowing them to implement new forms of large-scale data gathering, analysis and sharing. The risks and opportunities of interdependence also led them to work together across borders in unprecedented ways. Not only was it far easier and cheaper than ever before to gather information on how ordinary members of the population were behaving and communicating with each other, but it was also far easier and cheaper to share this information across countries. It is hard to overstate the importance of these data-sharing arrangements. The current U.S. ambassador to the European Union describes the post-Snowden difficulties that have cropped up in data sharing as the single most important issue in the current transatlantic relationship.

What is difficult—and often effectively impossible—is to draw a clean separation between domestic and international flows of information. National laws in areas such as spying, policing and access to cryptography have usually drawn sharp distinctions between the kinds of things that the state could do with the information of citizens and the information of foreigners. These distinctions were deliberately weakened after September 11 to make it easier for law-enforcement authorities and foreign intelligence agencies to work together. Yet even without these changes, new communications technologies, such as the Internet, made it more difficult to distinguish the information of citizens from that of foreigners. Unsurprisingly, security agencies have often sought to take advantage of these ambiguities.

The result has been both a vast cross-national expansion of surveillance and a promiscuous commingling of information on citizens and foreigners. Spying, which used to be expensive and focused on individuals and small groups, now gathers extensive information about the communications patterns of entire populations, sifting vast seas of data for politically or economically relevant information. Cooperation and information sharing between different countries’ intelligence and security agencies have expanded enormously. The confusion of domestic and foreign information makes it harder for intelligence agencies to distinguish the two, and very tempting to use the ambiguities to extend their grasp as far as possible.

This expansion in collection and sharing has been driven by deliberate political action. One of the most troubling revelations from the Snowden leaks is that national intelligence agencies have secretly worked together to weaken restrictions on what they can and cannot do. As Snowden described the process in his testimony to the European Parliament:

One of the foremost activities of the NSA’s FAD, or Foreign Affairs Division, is to pressure or incentivize EU member states to change their laws to enable mass surveillance. . . . [in] an intentional strategy to avoid public opposition and lawmakers’ insistence that legal limits be respected, effects the GCHQ [Britain’s equivalent of the NSA] internally described in its own documents as “damaging public debate.”

More broadly, the vast expansion in information sharing and cooperation has created a tacit division of labor between different national spying agencies, in which State A may gather vast amounts of data on State B’s population through surveillance, and vice versa, generating a form of universal coverage. While agencies usually formally decline to directly cooperate in gathering data on their own citizens, they may wink at foreign agencies’ data-gathering efforts on their soil. Sometimes, they do not decline to cooperate. As Greenwald’s book notes, the United States apparently shares raw unfiltered data on its citizens with Israeli intelligence.

The last thirteen years, then, have seen a quiet internationalization of the surveillance state. For sure, intelligence agencies are still reluctant to share their most prized secrets with other countries. Yet they have also created common data structures. Snowden was able to gather documents from the intelligence agencies of the United Kingdom and a few other countries because they systematically share Wikipedia-like databases with the United States and their other counterparts. No-fly lists and other documents are shared across countries with little accountability, but with enormous consequences for those whom they deliberately or accidentally target. Actors hoping to expand the security state tacitly coordinate their efforts with their counterparts overseas. America is at the center of this web of cooperation, which on the one hand secures it from political pressure to share information it does not want to share, but on the other presents it with unprecedented opportunities to surreptitiously gather information on both the citizens of allies and its own citizens.

This vast expansion in international surveillance terrifies Snowden and Greenwald. Both acknowledge the inevitability (and, in Snowden’s case, the desirability) of some spying, especially on hostile states. Both, however, fear the implications of increased spying for civil liberties within democracies, as these democracies’ governments spy on their own citizens and on each other. Greenwald’s rhetoric is uncompromising, but his actual political beliefs are squarely moderate-left liberal. Snowden is a libertarian on economic issues, but his understanding of the relationship between civil rights and national security is also perfectly compatible with standard liberalism.

LIBERALISM, IF it is to stay genuine and relevant, has no choice but to engage with Snowden and Greenwald. The problems they identify have sweeping implications for the balance between security and liberty. When Greenwald says that the NSA wants access to everything, he is writing on the basis of the goals explicated in the NSA’s own internal documents.

As the trio of Wilentz, Packer and Kinsley demonstrate, it will be especially difficult for national-security liberals to engage seriously with these problems. Most liberals assume a clear division between national politics, where we have strong rights and duties toward each other, and international politics, where these rights and duties are attenuated. National-security liberals, in contrast, start from the belief that we owe it to the world to remake it in more liberal ways and that America is uniquely willing to further this project and capable of doing so by projecting state power.

Snowden and Greenwald suggest that this project is not only doomed but also corrupt. The burgeoning of the surveillance state in the United States and its allies is leading not to the international spread of liberalism, but rather to its hollowing out in the core Western democracies. Accountability is escaping into a realm of secret decisions and shadowy forms of cross-national cooperation and connivance. As Princeton constitutional scholar Kim Lane Scheppele argues, international law no longer supports national constitutional rights so much as it undermines them. U.S. efforts to promote surveillance are hurting civil liberties at home as well as abroad, as practices more commonly associated with international espionage are redeployed domestically, and as security agencies (pursuing what they perceive as legitimate goals) arbitrage the commingling of domestic and international data to gather information that they should not be entitled to.

It is possible in principle that national-security liberalism might renew itself. There are reasonable arguments to be made for increased cross-national cooperation and security; terrorists are as capable of arbitraging cross-national differences as security agencies. However, if those arguments are to be genuinely liberal, they will have to take account of the profound changes in international surveillance and their systematic consequences for individual rights.