Big-Government Conservatism in the Era of Trump 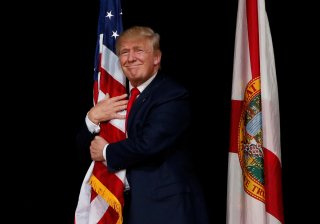 Big government conservatism is back. “In 2020, the economic libertarians who once defined conservatism have disappeared, writes Politico’s Ryan Lizza. “Instead, the most interesting debate is among Republican policymakers crafting large-scale programs to get government checks into the hands of economically disenfranchised people as quickly as possible.”

The phrase has appeared before. Fred Barnes, then of the Weekly Standard, used it to describe George W. Bush. “The essence of Bush's big-government conservatism is a trade-off,” he wrote in 2003. “To gain free-market reforms and expand individual choice, he's willing to broaden programs and increase spending.”

Donald Trump Republicans are overwhelmingly not of the George W. Bush variety. They do not see the United States as an aspiring United Nations on immigration or foreign policy, though unreconstructed Iraq war apologists can be found lurking around national conservatism conferences and the Trump national security council. If they are big-government conservatives, then they are at least less ambitious ones.

Trumpian nationalists are also, in theory, trying to use government policy to serve the material needs of their actual electoral coalition, while Bush-era compassionate conservatives hoped to buy off Democratic voters by making them homeowners, enticing them to join the “new investor class” or handing them fancy new prescription drug benefits. Finally, there is a huge difference between compensating people who are out of work on a massive scale as a direct result of government policy in response to a pandemic that is no fault of their own and bailing out banks behaving badly or pursuing fiscal stimulus according to debatable economic theories.

Hyperindividualism—let’s not call it libertarianism for the moment to avoid quibbling over definitions—is not well suited to dealing with huge communal threats like the coronavirus. Neither letting people pursue their own concept of the good in their own way nor conventional Republican half-measures like tax-free personal coronavirus savings accounts are going to promote the national interest, to say nothing of the interests of millions of innocent individuals, in the face of a deadly, highly contagious illness.

At the same time, the government has not covered itself in glory throughout this crisis. The federal program designed to keep small businesses afloat is slow to deliver loans, lavishes funds on bigger companies that aren’t entitled to them, and keeps running out of money. The government’s initial guidance on protective face masks appears to have been wrong. Some lockdowns are capricious, keeping Walmart open and mom-and-pop stores closed, to say nothing of shuttering churches while abortion clinics remain “essential” businesses. Social distancing requirements, however necessary in the medium term, have created Great Depression-like unemployment.

New York City, the epicenter of the pandemic, is not exactly the setting of an Ayn Rand novel when it comes to the size of government, though it does increasingly resemble the mythical Lockean state of nature. Some regulations that have been eased to cope with the virus should probably never return.

The Trump administration has challenged free-market orthodoxy on nationalist terms without instilling much confidence in its governing prowess. It has so far run Washington largely like Republicans have since the 1980s, talking fiscal conservatism while coupling tax cuts with deficit-financed spending increases, winning votes based on respectable economic growth (which is for the time being no more) and the Democrats’ growing intolerance of cultural conservatives. Few political analysts think its populism will survive contact with the next Democratic president’s spending programs—Republicans may trust Trump with the levers of power, but they will not give Joe Biden the same benefit of the doubt.

Still, the Trump years have reminded us that immigration is not just between a lawyer and his gardener—it is a process for creating new Americans in which the whole political community has standing. National security interests in domestic manufacturing capacity, though easily exploited by special interests, are not always hard cases that make bad law. And if the end of history is upon us, we don’t want China, with just enough markets to let the Communist Party live like capitalists while much of the population remains enslaved, to be the final destination.

If only there was a name for a political inclination coupling these observations with a desire to rebuild the American economy rather than Afghanistan’s. Maybe conservatism, without the “big government” modifier, would do nicely.