A Big Mistake: America Teaming Up with Iran in Iraq 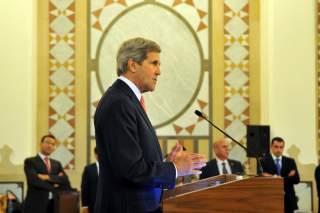 On Tuesday, the jihadist group ISIS (Islamic State of Iraq and al Sham) launched a long-planned assault on Iraq, seizing control of Mosul, the country’s second largest city, after taking large parts of the central city of Fallujah and nearby Ramadi in December 2013. ISIS is believed to have no more than 6,000-10,000 fighters in Iraq, yet it has captured large chunks of territory in lightning speed with relative ease. Iraqi soldiers have fled and capitulated in the tens of thousands. Only the Kurdish Peshmerga aggressively pushed back and were able to bring Kirkuk and some parts of Kirkuk province under their control.

Over the past five days, ISIS has strengthened its grip on the country and pressed south to Baghdad. On Wednesday, it captured Tikrit, Saddam Hussein’s home town, and targeted Samarra and oil-rich Baji. The town of Dhuluiyah and the Muatassam area, just fifty-six miles from the capital city Baghdad, are also thought to be under its authority (although Iraqi security forces may have already retaken the area). Although the Iraqi army reports that it has slowed down the advance of ISIS, the jihadists continue to make gains and just yesterday seized control of Tal Afar in northern Iraq.

It seems that ISIS has turned into some kind of caliphate protostate. Its territory stretches across 360 miles from Raqqa in Syria to Fallujah, Mosul and Tikrit in Iraq. This equates to a domain roughly the size of Jordan. As it currently stands, ISIS holds at least three border posts between Syria and Turkey and several on Syria’s border with Iraq. On Wednesday, the jihadists symbolically demolished the border crossing between Iraq and Syria and its notorious black flag now flies between Ninawah in Iraq and Hasakah in Syria. Sykes-Picot is disappearing in front of our eyes and the concept of nation-state is giving way to caliphate.

The unfolding crisis in Iraq poses a serious challenge to regional stability, as well as global security. Hundreds of Americans and Europeans are thought to be fighting alongside ISIS and other jihadist groups in Syria and Iraq and terrorism experts classify them as one of the most profound threats to Western security since 9/11. Just yesterday, the German police jailed a French national associated with ISIS and today the Spanish authorities arrested eight people connected to the terrorist group.

It is thus of critical importance not only for the Middle East, but for our own national interest to understand the root of ISIS’s rise to power.

Unfortunately, many commentators too quickly pinned the current crisis on the decision to invade Iraq in 2003, ignoring eleven years of turbulent history in between. We have to remember that when we withdrew from Iraq, Al Qaeda and its affiliates had been all but eradicated. We also have to carefully distinguish between ISI in Iraq and ISIS in Syria. While ISI was part of the Al Qaeda network in Iraq, ISIS originated in Syria and operates independently from Al Qaeda. The circumstances which have given rise to ISIS are not so much related to the intervention in 2003, as to the brutal war and nonintervention in Syria; and the main source of ISIS’s success in Iraq today is Iraqi Prime Minister al-Maliki’s politics of sectarianism.

The mass slaughter in Syria has been going on for over three years, and over 150,000 people have already been killed. While jihadist groups did not start the revolution, they have hijacked the opposition and the moderate rebels have been starved of support almost to the point of irrelevance. ISIS was one of the jihadist groups that surfaced in Syria under the leadership of Abu Bakr al-Baghdadi, who was in U.S. custody until 2009. Unlike other jihadi commanders, Baghdadi is extremely careful and likes to keep a low profile. Yet his strategy is of such ruthlessness and brutality that his group has been deemed too extreme even for Al Qaeda, whose central leadership publicly disavowed them. Mass beheadings and public crucifixions have become its trademark and its reign of terror has spread to important strategic positions inside of Syria. Indeed, the assault on Iraq was planned and originated in the Syrian town of Raqqa.

At this point, Maliki’s politics of sectarianism come into play. When ISIS pushed forward into Iraq, many Sunni local tribesmen gladly joined its ranks to fight against what they consider an extremely repressive Shia-dominated government in Baghdad. ISIS also found support amongst Saddam’s former henchmen and that is perhaps evidence for the claim that decisions taken in post-war Iraq have facilitated ISIS’s appeal. Particularly, the controversial De-Ba’athification left tens of thousands of well-trained former Saddam loyalists on the street just waiting for a chance to take revenge. Of course, it would have been impossible in 2003 to keep a largely Sunni-dominated army in control of a Shia majority country, but the process could have been handled with much more care and nuance. The fall of Tikrit, a stronghold of Saddam’s loyalists which ISIS captured with almost no resistance, has become a symbol of this. ISIS, Baathists and local tribesmen and Islamists may not have much in common, but they have a common enemy—Maliki.

Maliki’s government has been left floundering by the alacrity of the jihadist assault and has been desperately seeking help in the fight against ISIS. But with the exception of Iran, no one has come forward offering direct assistance. According to different sources, Tehran has already sent more than 2000 advanced troops into Iraq in the face of a potential ISIS attack on Baghdad. In addition, fighters of Iranian proxies Kataib Hezbollah, Asaib Ahl al-Haqq and Liwa Abu Fadl al-Abbas have reportedly relocated to Iraq.

Yesterday, the Obama administration met with Iranian officials in Vienna for nuclear negotiations and Secretary John Kerry earlier stated that he is “not ruling out U.S.-Iranian joint military cooperation in stemming the advance of ISIS in Iraq” (interestingly, the Pentagon seems to be taking a different position). Not only members of the Obama administration, but also high-ranking Republicans have called for a joint U.S.-Iranian strategy as they see a clear alignment of interests. This approach, however, is a tragic miscalculation of the overall situation in the Middle East and ignores the root cause of the current crisis. If we accept that ISIS is mainly a product of the brutal war in Syria, then what they suggest is to collaborate with the very same actor that is partly responsible for the rise of ISIS in the first place. Iran and its proxy Hezbollah have been a crucial lifeline for the Assad regime. Cooperating with Iran on Iraq would be a self-defeating policy. Furthermore, to introduce another Shia actor into a conflict that already has the Sunni-Shia faultline at its heart would most likely exacerbate the violence.

One thing is clear: we have invested too much blood and treasure in Iraq since 2003 to just sit idly by and watch as the country slips into the hands of Islamic extremists. Whatever approach we might take, it is of utmost importance to understand two points:

First, ISIS is not a product of intervention in Iraq, but rather nonintervention in Syria. Iraq’s problems cannot be fixed without finding a new approach to the ongoing slaughter in Syria. Otherwise, we are treating the symptoms but not the cause. Assad has been allowed to act with impunity for far too long, dragging the region into the abyss. Iraq and Syria are in disintegration and the Lebanese, Turks and Jordanians have reached the breaking point of their capacities with thousands of refugees pouring into their countries every day.

Second, Maliki’s politics of sectarianism have created a climate of fear and hatred in which groups, such as ISIS, can flourish. While Saddam brutally persecuted the Shia, Kurds and other minorities, Maliki has turned the tables and now suppresses the Sunni. The status quo is simply not sustainable. We now have an opportunity to put pressure on his government and make any assistance we give him in the fight against ISIS conditional upon reconciliation with the Sunni community. We must not fall victim to the Iranian trap and maneuver ourselves into a grotesque position where Iran expands its sphere of influence under U.S. drone cover in Iraq. The introduction of Iran into the conflict will only intensify the Sunni-Shia schism that is already ripping the region apart.

Julie Lenarz is the Executive Director of the Humanitarian Intervention Centre, fellow at The Institute for Middle Eastern Democracy and an adviser on Foreign and Security Policy.