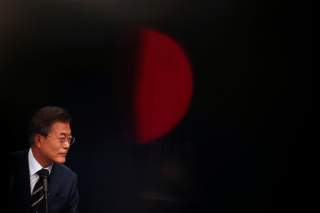 South Korean president Moon Jae-in wants to sign a peace treaty to formally end the Korean War, amend his country’s constitution, and begin connecting transportation links to North Korea, all by the end of this year. To accomplish these goals, Moon announced he will go to Pyongyang next month for his third inter-Korean summit.

“Why the rush?” Tara O, a Korea analyst at the Pacific Forum CSIS, asked me last week. She thinks Moon wants to be remembered as achieving unification of the two Koreas.

Korea was divided at the end of World War II by Soviet and American forces, and both North and South Korean leaders have since sought to put their country back together. The June 1950 invasion starting the Korean War was the preferred unification method of Kim Il-sung, the founder of the Democratic People’s Republic of Korea.

Presidents of the Republic of Korea were much more peaceful in their ambitions. Since September 1989, every one of them has endorsed the National Community Unification Formula, which affirms that a unified state should be a liberal democracy.

Moon, has given lukewarm endorsement of the formula. And although he is a supporter of democracy, the president does not appear to feel strongly about his country’s version of it. His Democratic Party of Korea has led an attempt to remove the notion of “liberal” from the concept of “democratic.”

There was talk among members of Minjoo, as Moon’s party is known, about amending the constitution in this regard, but the effort did not proceed very far.

Moon, however, has not given up. His Ministry of Education in June tried to eliminate the concept of liberal democracy from textbooks, proposing to describe the nation’s political system as just “democracy.” The Ministry relented, permitting the concept of freedom to be included.

Kim Jong-un’s regime of course rejects the label “liberal” but maintains it too is “democratic,” so changes would have reduced a barrier to the union of the two Koreas.

It is ironic that Moon once prided himself on his fight, with the country’s military rulers, for democracy. Now, in power, he has shifted his goal to unification.

His Ministry of Education, for example, is doing its part. Up until now, textbooks have stated that Seoul is “the only legitimate government on the Korean Peninsula.” New textbooks will not include that statement.

Moon evidently sees the Kim regime as legitimate. The North’s horrific human rights abuses, termed “crimes against humanity” in 2014 by the UN’s Commission of Inquiry on Human Rights in the Democratic People’s Republic of Korea, do not seem to matter to the South Korean leader in this regard.

Nor does the North’s renegade nuclear weapons and ballistic missile programs. Last year, with no or virtually no consultation with Washington, Moon’s foreign ministry bowed to Chinese demands—the infamous Three Nos—to severely restrict missile defense systems in the South.

Moreover, Moon’s diplomats have been making the case that international sanctions should not apply to inter-Korean economic development projects.

At first, Moon agreed with Washington that sanctions should stay in place until Kim gave up his arsenal. Recently, the South Korean president has changed his mind. His foreign ministry has been lobbying both Secretary of State Mike Pompeo and the UN Security Council to permit projects that would quickly pour money into North Korean coffers.

Moon’s justification for the proposed exemptions? Lots of cash would give Kim the confidence to surrender weapons. Moon pressed that case on the fifteenth of August in his annual Liberation Day speech, in which he proposed that both Koreas form “a single economic community.”

And as time goes on, Moon has been more confident in pressing his views. As David Maxwell of the Foundation for Defense of Democracies points out, Moon’s presidential office is now publicly taking North Korea’s side on issues, “telling the U.S. to give into North Korean demands.”

The concern is that Moon also wants a treaty to formally end the Korean War, to create what April’s Panmunjom Declaration calls a “peace regime.” Many worry that, once a peace deal is inked, he will end the military alliance with the United States and remove American forces from the peninsula.

North Korea taking over the South is inconceivable to most observers, but unfortunately it is entirely possible. A breaking of the alliance would leave South Korea without adequate defense, especially because Seoul is planning to take down fencing and guard posts and substantially reduce the size of its military. “Moon is not only leaving the door open,” Tara O told me, “he’s removing all the doors and windows.”

It’s not hard to see how in a few years Kim Jong-un would be in a position to intimidate Seoul into submission. That would please a few of Moon’s senior advisors, who in their youth as members of the juchesasangpa were proponents of North Korea’s juche ideology and today retain pro-Pyongyang views.

No wonder Kim Jong-un has been recently talking about “final victory.”