Bigger than Brexit: This Could Be the Start of an EU Crack-Up 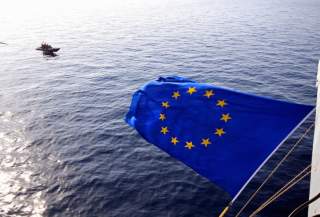 Brexit is a fascinating prospect. The idea of a member state potentially leaving the European Union is new terrain—at least to the degree that it is within reach of actually happening. The debate is exposing deep ruptures in the governing Conservative Party, and deeper divisions in British society over issues such as immigration, welfare, public spending and security. However, what is more fascinating is the debate that is not being had. That debate is arguably a more fundamental one, and it involves the fate of the European Union itself.

Most, if not all, of the coverage in Britain over the referendum has revolved around the “Leave” and “Remain” campaigns, and the array of experts and figureheads each have assembled to present their cases. There has also been vibrant reporting on polls, which now show the Leave camp edging ahead. Polls themselves have recently taken a battering after they spectacularly failed to even come close to the actual result of the last British general election. In the case of a referendum like this, with such a large proportion of the population undecided and being influenced by the daily news cycle, poll data is equally unlikely to present an accurate picture of the final result.

What seems most likely is that the British public will vote to remain, and do so by a majority of at least five points. This analysis would base itself on data and research before the campaign began and points to a more settled picture of public opinion. It also assumes that a vast majority of those undecideds, who may have been swaying between one position and the other (explaining the volatility in the polls), will step behind the curtain on voting day and vote Remain out of a fear of the unknown—a safety-first instinct.

This outcome would avoid any ambiguity over the future of the governing Conservative Party. Prime Minister David Cameron would have his mandate strengthened and the Euroskeptic wing of the party would have to retreat to the backbenches. It also would be the beginning of the end for the United Kingdom Independence Party, which has not yet managed to grow into a party that reaches beyond single-issue politics. One would presume UKIP will start to witness a downward spiral as the next round of local and European elections arrive, culminating in a loss of its marginal presence in the House of Commons in the next general election.

With the immediate local issues for Britain sketched out, back to the central proposition of this article: the fate of the European Union. It is unlikely that, whatever the result, the issue of member states seeking to leave the EU will be settled. In fact, there is a very real prospect that other member states will attempt to launch in/out referenda of their own. The migration crisis, and the eurozone financial crisis before it, has exacerbated a volatile and pervasive current of Euroskeptic opinion across the continent. As the migrant crisis continues, and sclerotic economic growth continues in the EU, this will only get worse. There is already clear evidence of politics polarizing across the continent and leaders (or prospective leaders) looking for alternative solutions and easy targets to blame and rally their followers around, as UKIP has done with some success in Britain.

To sketch this out further, to examine the case of Greece: it is not far from fantasy to imagine a Greek leader calling a referendum on leaving the EU. The Greek economy is crippled, and as a member of the eurozone, it lacks certain monetary tools that it would otherwise have at its disposal. The idea of a “Grexit” is back on the agenda, and will perhaps have much more of an effect on the EU than any potential Brexit—primarily because of Greece’s membership in the eurozone (Britain is not a member) and the immense investment the EU has put into bailing out Greece. So, when considering such toxic issues as the status of Greece, where the economy is in tatters and unemployment is over 20 percent, Brexit seems like a noisy sideshow. And this is before any examination of serious structural problems in the economies of Spain, Portugal and Italy, among others—again, all members of the eurozone.

Perhaps, then, when the dust has settled on Brexit, the debate will move back to the real issue at hand: the possible disintegration of the eurozone, and perhaps a significant slimming down of the European Union itself, in terms of membership and/or competency.

Firstly, monetary union has structural problems that only deeper integration will solve. Even if the will can be gained for this, and it will require a new EU Treaty, it remains unclear whether it is wise or even possible. Europe’s economic outlook is not strong, and the temptation for nations to go it alone (or at least to ponder the question) will surely seem more attractive as trends continue downward with the status quo. This will certainly be most acute in Greece, but other national conversations will follow.

Secondly, the migration crisis has blown open a debate on one of the central pillars of the single market—the free movement of people throughout the European Union (with minor restrictions in some cases). Although this has featured in the Brexit debate, the larger issue is an open wound in the European project that may eventually break it. Presumably short of creating deeper integration of policy in this wider area, which is highly unlikely, the solution will be to dissolve aspects of this fundamental pillar of the EU in the face of public outrage and political headwinds.

Just looking at these two issues is sobering to put the prospect of Brexit in perspective. Whether the projection made in this article of a vote in favor of Remain is incorrect—and it very well may be—the real implications are wider. Britain is a leading world power with a robust economy. It will do just fine in or out of the EU when the dust settles. The EU, though, faces a serious set of challenges. Facing those, the European project would be better served to have one of its most reform-minded and critical players at the table (Britain) so that future solutions to existential problems are as robust and well thought through as possible. Anything less may lead to commentators looking back on the year of the Brexit debate as the tipping point of “peak” European Union.