The Black Lives Matter Movement Must Solve Its Violence Problem 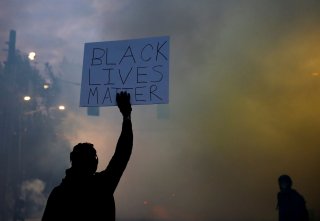 The issue is an old one; however, current events require that we revisit the question of whether it is justified to resort to violence to gain social change in democratic societies (however flawed they are). The Black Lives Matter movement deserves great credit for mainly peaceful demonstrations, and for working hard to limit looting and violence. However, the use of force by some demonstrators has received support from a significant segment of the public. A recent CNN poll found that one out of four (27 percent) Americans believe that violent protests are justified. This is a considerable increase from the 14 percent who felt this way in 2016. Almost half of the Democrats hold that violent protests are justified; the same is true of 23 percent of White respondents.

A troublingly large line-up of public intellectuals are again providing justifications for violent protest. Wellesley College assistant professor of African studies Kellie Carter Jackson recently wrote, “Violence disrupts the status quo and the possibility of returning to business as usual. . . . The American Revolution was won with violence. The French Revolution was won with violence. The Haitian Revolution was won with violence. The Civil War was won with violence. A revolution in today’s terms would mean that these nationwide rebellions lead to black people being able to access and exercise the fullness of their freedom and humanity.” Northeastern University associate professor of sociology Gordana Rabrenovic argues that the violence that African American people experience in their interactions with state-sponsored individuals and systems leads them to ask, “If they use violence, why shouldn’t we use violence?” American University provost Daniel J. Myers offers another justification: “Violent protest . . . advertise[s] the cause in a uniquely powerful way.” University of Pennsylvania professor, historian, and author of The Loud Minority Daniel Q. Gillion reports, “Nonviolent protest brings awareness to an issue; violent protest brings urgency to an issue. It forces individuals to pay attention to these important discussions of race relations.” Finally, New York Times columnist Charles Blow wrote: “Some of the people now breaking things and burning things and looting things are ironically participating in a storied American tradition. There has long been a penchant for destruction in this country, an insatiable bloodlust, that the country conveniently likes to forget. American violence is learned violence. It is the American way. . . . White riots have often, historically, targeted black people, while black people have rioted to protest injustice. On either side, racism is the root. And we have refused to sufficiently address it. Now, that chicken is coming home to roost.”

As I see it, revolutions are very rare, very hard to bring about, involve large bloodshed, and often are followed by new tyrannies. Moreover, there are prudent reasons to urge protestors not to resort to violence. According to Georgetown Professor Michael Kazin, “[N]on-leftists often see [the left] as a disruptive, lawless force. Violence tends to confirm that view.” Research shows that violent campaigns are less likely to succeed than nonviolent ones, and, conversely, those nonviolent movements have a higher success rate than violent ones.

Another study asked eight hundred people to react to a situation inspired by events in which violence erupted in a clash between White nationalists and antiracist groups. When antiracists resorted to violent tactics, study participants were less likely to support them and more likely to support the White nationalists. The study shows that “violence [by the antiracists] led to perceptions of unreasonableness, which reduced identification with and support for the protest group.”

These findings are further supported by Princeton University professor Omar Wasow’s study of presidential politics in the 1960s. He discovered that “proximity to black-led nonviolent protests increased white Democratic vote-share whereas proximity to black-led violent protests caused substantively important declines and likely tipped the 1968 election from Hubert Humphrey to Richard Nixon.” More recently, instead of scaring the elites into yielding, violence has contributed to the growth of increasingly large and heavily-armed police forces.

Some claim now, as they did then, that the violence of those who supported Malcolm X, the Black Panthers, and the Weathermen helped the overall cause because it made Martin Luther King, Jr.’s movement seem moderate in comparison. But this perspective ignores the fact that the elites used violent acts to smear the moderates. Violence even by a small minority within a movement, as sociologist Todd Gitlin observed, “is food for the adversary.”  The 1968 riots led to few reforms, but to great increases in the firepowers of the police.

Moral deliberations point in the same direction. Violence is not merely a poor strategy, but it also raises major ethical concerns. The key moral value that the Black Lives Matter movement taps into is the sanctity of life. It is the recognition—reflected in the legal and moral codes of ancient and contemporary societies, above all in those of liberal democracies—that taking a life is a much more serious offense than most any other action. This is the reason courts typically mete out a much more severe punishment for murder than for other crimes. Moreover, one can readily recognize that all individual rights logically presuppose respect for the right to live. Dead people have very few rights; live ones, no matter how injured, may recover, exercise their rights, and confront those who oppressed them. This certainly holds for Black lives and is the reason major, encompassing reforms in the ways public safety is provided must be introduced and implemented. However, it is also the reason to oppose violence—every life precious. Indeed, I believe a strong case can be made for the Black Lives Matter movement to add to its brief the demand that all death penalties be outlawed.

One may argue that—so far—loss of life has been inflicted almost completely by the police and not by the demonstrators, which is, indeed, to the demonstrators’ credit. However, once violence is justified, protests lose on both prudent and moral grounds.

Amitai Etzioni is a university professor and professor of international affairs at The George Washington University. In 1968, he wrote an article for the New York Times Magazine called “Confessions of a Professor Caught in a Revolution.” For more about the Columbia University protests, see his memoir, My Brother’s Keeper. Etzioni is the author of Demonstration Democracy, among other books.