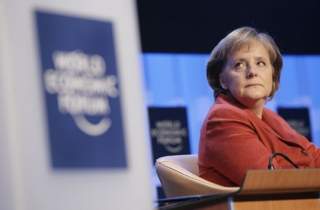 In 1919, the European nations that had prevailed in WWI imposed onerous peace terms on Germany via the Treaty of Versailles. The harsh economic sanctions and reparations imposed on Germany led to economic catastrophe, massive unemployment, hyperinflation and eventual political turmoil, which led to the rise of fascism a little more than a decade later. After only five years of strict enforcement, France finally relented and canceled some of the more onerous terms of the treaty, but by then the economic and political forces in Germany that would see the rise of Adolph Hitler were already in motion. The Second World War was already inevitable.

The insistence of the WWI allies on political humiliation and economic punishment for Germany presents a remarkable parallel to the position taken by German chancellor Angela Merkel over the question of economic austerity and debt repayment for Greece and other heavily indebted nations in Europe. After the human and economic pain of losing two world wars, is it possible that Germany’s leadership has not learned the key lesson of economics, namely that benevolence is always a better course than retribution? Just ask Vladimir Putin of Russia, who has set back his nation’s economy by decades in order to resist the fearsome specter of a Ukrainian free trade agreement with the EU.

As my co-author Fred Feldkamp noted in our 2014 book, Financial Stability: Fraud, Confidence and the Wealth of Nations, Adam Smith demonstrated more than two centuries ago that benevolence is the driving force by which the invisible hand of economics can produce optimal benefits. The work of Smith in “The Wealth of Nations” supports the approach of Washington with the post-WWII Marshall Plan, whereby the United States rebuilt much of the industrial world using debt forgiveness and copious amounts of new credit. All nations benefitted from America’s generosity. Smith also demonstrates the futility of nations that attempt to punish actual or potential trading partners via reparations and other sanctions, like those applied to Germany via the Versailles Treaty.

By insisting on austerity to enable repayment of debt by nations such as Greece and Spain, to use just two examples, Germany is repeating the very same mistakes that led to disaster for Europe in the 1920s and 1930s. We need to keep in mind that Germany, France and other larger EU nations extended loans to nations like Greece in order to drive exports of goods and services. A lot of short-sighted politicians, corporate executives and bankers enabled this process of lending to a nation that clearly lacked the ability to repay. And now no one in the major capitals of the EU wants to talk about debt restructuring for Greece and other southern European nations.

“There is an odious component in Greece's sovereign debt,” notes Berlin-based analyst Achim Duebel. “There have also been already two rounds of Greek debt restructuring, but of course the creditors have in the meantime changed.”

(Related: The Deep Roots of the Great Recession)

The elections in Greece have brought to power Syriza, a left-wing nationalist tendency that bypassed the existing political parties on a platform of rejecting the German-imposed austerity and debt rescue plan, a scheme which essentially requires Greece to follow in the footsteps of 1920s Germany. Greece’s new finance minister, Yanis Varoufakis, has denounced German-inspired threats by the European Central Bank (ECB) to cut off funding for Greek banks as “political intimidation,” “warning in fiery language that his country’s democratic revolution will not be crushed into submission,” reports the London Telegraph.

Meanwhile in Spain, a poll showed this week that the anti-austerity Podemos party would come second in an election to the ruling People's Party, but ahead of the Socialists. “Support for the conservative People's Party (PP) and the Socialists,” Reuters reports, “the two dominant parties since Spain's return to democracy in the late 1970s, has fallen to a record low after a series of corruption scandals and tough welfare cuts.”

As with Syriza, Podemos is a relatively new political party—in fact, less than a year old. But this insurgent bloc now threatens to force the ruling Socialist Party into a coalition, if not take the election at the end of 2015 outright. But in both Greece and Spain, the central lesson is that austerity in the name of paying foreign creditors does not sell, either in economic or political terms.

Germany and the other core nations of the EU need to admit that much of the debt incurred by Spain and Greece was unsustainable from the start and was only extended to drive the appearance of economic growth in the EU. Just as the United States used a domestic housing finance boom in the 2000s to fashion the pretense of economic solidity, the loans to Greece were likewise a canard.

Without a change in the stance taken by the ECB and, behind it, the German financial and business establishment, the politics of Europe will continue to radicalize and deteriorate in an almost perfect replay of the 1920s. As Joschka Fischer, German foreign minister and vice chancellor from 1998-2005, wrote in Project Syndicate:

“Even before the leftist Syriza party’s overwhelming victory in Greece’s recent general election, it was obvious that, far from being over, the crisis was threatening to worsen. Austerity—the policy of saving your way out of a demand shortfall—simply does not work. In a shrinking economy, a country’s debt-to-GDP ratio rises rather than falls, and Europe’s recession-ridden crisis countries have now saved themselves into a depression, resulting in mass unemployment, alarming levels of poverty, and scant hope.”

Germany’s leadership must somehow come to understand that the real threat today is not the inflation of Weimar Germany, but the political unrest caused by the crushing burden of foreign debt. “There has already been voluntary debt forgiveness by private creditors, banks have already slashed billions from Greece’s debt,” Merkel told the Hamburger Abendblatt. “I do not envisage fresh debt cancellation.” But without additional reductions in Greek debt, the country is likely to default on its remaining obligations and begin a process of financial repudiation and political radicalization that could spell the eventual unwinding of the EU itself.

Germany needs to tone down its rhetoric and admit that the debt forgiveness and bailout loans provided to Athens so far have largely saved banks in Germany and other EU nations via the back door, rather than actually helped Greece itself. The Greeks have received all the blame for the crisis, whereas the bankers in Frankfurt deserve the lion’s share of the culpability for making these ill-advised loans in the first instance. But does Merkel have the courage to make this case to the German public? The fate of Europe hangs in the balance.