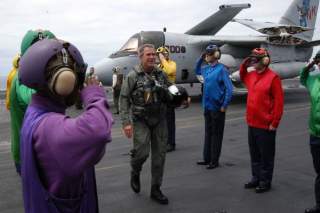 As the United States and the international community struggle to find a satisfactory solution to the current chaos in Iraq, many of those who got us into this mess by advocating the invasion and overthrow of Saddam Hussein in 2003 are trying to avoid or shift the blame for it. Their arguments fall into three categories:

First, the blame for the current sectarian conflict should be split between President George W. Bush and President Obama. According to this line of reasoning, Bush may have launched what turned out to be an unnecessary and incendiary war in Iraq, but Obama allowed the United States to leave too soon. In other words, Bush’s 2003 invasion and Obama’s 2011 troop withdrawal cancel each other out and are equally responsible for the current sectarian crisis in Iraq.

Second, President Bush may have bungled the invasion, but the surge of troops in 2007 restored stability to Iraq and bequeathed a peaceful state of Iraq to his successor in office. In this line of thought, Obama could have prevented the current erosion in Iraq simply by keeping tens of thousands of U.S. troops in Iraq indefinitely.

Third, the United States should not look back at whatever mistakes may have been made in Iraq over the past decade but instead focus now on how to deal with the current situation. This argument holds that playing “the blame game” only keeps us from coming up with appropriate solutions to the current challenge—that it is a distraction from the real problem at hand.

But close analysis reveals that these arguments are without merit—in fact, they are nonsense. The blame for the mess is completely on President Bush and his acolytes, and trying to sweep it under the rug will not help us understand how we got to where we are now, and what to do about it.

As Richard Haass, Director of Policy Planning at the State Department at the time of the invasion of Iraq, recently admitted, Bush invaded Iraq not because there were weapons of mass destruction or ties to terrorist groups, but, in a phrase used by Richard Nixon, to show the world that we were not a “pitiful, helpless giant.” Moreover, Bush swallowed Vice President Cheney’s claim that we would be greeted as liberators and that an invasion would not inflame Sunni-Shia violence or empower Iran. Therefore, not only did President Bush invade Iraq before the UN weapons inspectors finished their job, he did not send in enough troops to control the situation, and then allowed his handpicked envoy, Ambassador Paul Bremer, to destroy the Iraqi state and put a pro-Iranian Shiite, al-Maliki, in power. This not only benefited Al Qaeda, which was not in Iraq before we invaded, and helped them to protect their Sunni brethren, but allowed Iran to send their forces and operators into Iraq.

But didn’t Bush’s surge in 2007 make up for the mistakes he made and turn Iraq into a peaceful, stable country before we left? Not really. Maliki, the Prime Minister we installed in 2006, was opposed to the surge because he did not want U.S. forces empowering Sunni terrorists, ironically called the “Sons of Iraq,” when they joined forces with the United States to confront Al Qaeda in Iraq, which had alienated the local Sunni population. Secondly, the surge was unanimously opposed by the Joint Chiefs of Staff, who, as Robin Wright noted, correctly argued that while the U.S. forces could beat back the insurgents, our diplomats could not broker a formula for political power sharing among the rival sects in Iraq, and any peace would eventually empower Iraq’s many, rival armed groups.

Many of the pro-invasion people argue that President Obama should have pushed harder to keep troops in Iraq after the 2011 deadline that President Bush and Prime Minister Maliki agreed to. What they forget is that this agreement was signed in December 2008 and ratified by the Iraqi parliament. Our lawyers and the Iraqi Chief Justice agreed that any follow-on agreement to allow troops to remain past 2011 would also need to be ratified by the Iraqi parliament—an unlikely prospect.

Moreover, what exactly would keeping U.S. troops in Iraq have accomplished? U.S. troops could not have prevented Maliki from taking action against his Sunni rivals or stopped Maliki from using the Iraqi Army as a political patronage tool, putting his loyal deputies in top positions and making it into a sectarian force. Even when the United States had more than a hundred thousand troops in Iraq, they were not able to rein in Maliki. For example, as Andrew Slater noted, between 2006 and 2008, U.S. military lawyers and commanders pressed Maliki to execute a warrant to arrest Lieutenant General Mahdi Al Gharawi, who was accused of running secret prisons and torturing prisoners. Maliki, however, promoted him and placed him in charge of Nineveh Province, where Mosul is located—a post he abandoned when ISIS invaded.

Even if one acknowledges the previous mistakes, what good does it do to assign blame when we should be looking forward? A lot. Unless we assign blame and understand what mistakes were made, by whom, how and why, the risks of repeating them are far too great. We need to understand what we did wrong in order to take appropriate action now. Moreover, we should not pay attention to people who collectively got us into this mess, such as Vice President Cheney, Ambassador Bremer and Undersecretary of Defense Douglas Feith. They are more interested in rationalizing their past sins and arguing for robust U.S. military intervention than in advancing reasonable U.S. responses to the current crisis.

Finally, by trying to blame Obama rather than Bush or Maliki for the escalating security and sectarian crises in Iraq, we make it more difficult for Obama to choose the prudent course. Rather than invading Iraq or undertaking a sustained drone bombing campaign, Obama has sent 300 Special Forces operators, with a guarantee of legal immunity, into Iraq to assess the situation. More importantly, he has sent Secretary of State John Kerry to meet with Prime Minister Maliki and press him and other Iraqi leaders to form a true unity government that represents all sectarian groups. Kerry has also met with leaders of other regional countries, and has expressed a willingness to work with Iran in a limited fashion to stabilize the situation in Iraq.

Finally, the president said he would be willing to take direct military action against ISIS operatives if they posed a direct threat to the United States, including the possibility of direct air strikes. In the final analysis, restoring stability in the region will be accomplished only through diplomacy. As we learned over the past decade in Iraq, relying on military power to achieve political outcomes does not work.