Blaming Russia Will Only Hold America Back 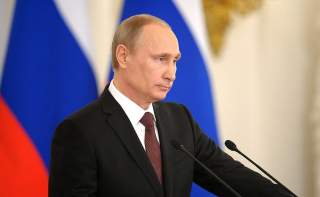 While pundits debate whether or not we are really in a new Cold War, most fail to see that we are already in the middle of a new Red Scare—the third in the past century.

The term “Red Scare” conjures up images of the illegal “Palmer Raids” of 1919–20, and the infamous House Un-American Activities Committee. The first Red Scare was mostly about closing America’s borders to anarchists, Bolsheviks and other undesirables, while the second was mostly about blocking out the siren song of Soviet communism, which seemed to exert a strange appeal for many academics, filmmakers, writers and even some government officials.

At the time, a common litmus test used to identify such covert agents of influence was their questioning of the existential nature of communism’s threat to America. Such questioning, it was argued, undermined national unity and played directly into the hands of the Soviets. It therefore became a matter of national security to uncover and eradicate such disloyalty.

Today’s Red Scare ascribes a similar role to those who call for improving U.S.-Russian relations.

In both Europe and the United States, legislation has been proposed that would remove speech that might undermine national unity from public fora. Major media accuse Russia of having subverted popular votes, from Brexit and the U.S. presidential election to referenda in Italy and the Netherlands. And, of course, there are the traditional calls to root out the “Kremlin moles” in our midst.

Some will say that the situation today is quite different, because in the internet age, censorship is impossible. But will we even know if ideas are being censored?

In an effort to prevent the spread of undesirable opinions and information, legislators in some Western countries have called for the introduction of algorithms that would prevent such ideas from registering in people’s news feeds. Propaganda and “fake news” would thus be strangled in the womb, so to speak, before they ever get noticed. Former British ambassador Craig Murray believes that his testimony about alleged Russian hacking actually being a leak from a source within the Democratic Party may have been the subject of just such preventive censorship.

But all is not doom and gloom. There are quite a few reasons to believe that the current Red Scare will fizzle out sooner than its predecessors.

The most obvious is that the president-elect perceives it as an attempt to undermine his mandate for altering U.S. foreign policy toward Russia.

A diverse array of former intelligence professionals, including Alastair Crooke, Graham Fuller and Ray McGovern, have even suggested that the current effort may be aimed at preemptively derailing a new détente with Russia. As such, it would quite unprecedented.

Donald Trump may have thought that his first task as president would be to “drain the swamp” of domestic bureaucrats, but it will actually have to be asserting control over the direction of American foreign policy. If this can be accomplished (a very big “if”), then the casually dismissive and often simply inaccurate rhetoric about Russia that characterized the previous administration could be replaced by a professional and businesslike tone.

Second, Red Scares form an integral part of any Cold War scenario, new or old. Without the former, the latter is unsustainable. Previous Red Scares meshed well with the official Soviet ideology of Marxism-Leninism, which provided an ideological framework within which to understand Russian foreign policy. Even as Sovietologists debated its relevance, its implications were apparent to all.

There is nothing of the sort today. While many find Russia’s annexation of Crimea, intervention in eastern Ukraine and support of Assad deplorable, few imagine that they constitute an ideological agenda. In each of these instances, the problem is not that Russia is playing by different rules, but that it is playing by the same rules as the West, only doing it better.

Those who, like Hillary Clinton, see the Eurasian Customs Union as an effort to “re-Sovietize the region,” are stymied by the fact that, in practice as well purpose, the Customs Union strives to be a carbon copy of the European Economic Community. It adopts EU standards, whenever possible, precisely because its ultimate objective is a free-trade zone from “Lisbon to Vladivostok.” If there is any ideological component here, it is the expansion of free trade, a value that most Americans share.

Finally, there is Russia’s striking unpopularity in the United States, which seriously undercuts the argument that the West is somehow being “outgunned massively by the Russians and the Chinese” in the information arena.

It is a telling relic of Cold War thinking that such claims still help in securing government funding. Many rightly note that Western media outlets are losing their credibility. But if so, it is clearly not due to their lack of funding.

In sum, the current Red Scare is most likely to follow the trajectory of its predecessors. First, reveal the Kremlin’s designs to undermine American democracy. Second, the government implements programs to save democracy, some of which will target “unpatriotic” ideas and opinions. Finally, skeptics of this approach are labelled “dupes,” “useful idiots,” or “Kremlin agents.” But since skepticism is at the heart of proper academic and journalistic inquiry, it is highly contagious. The list of “dupes” eventually grows to include nearly everyone, and the entire narrative implodes.

That might be a good time to ask ourselves why, more than a quarter century after the end of the Cold War, it is still so easy to view Russia as America’s enemy, and to consider the benefits that a policy of friendship, which once characterized our relations, might bring to both countries and to the world.

Nicolai N. Petro is professor of political science at the University of Rhode Island. He has written widely on Russian politics and foreign policy, and served as special assistant for policy on the Soviet Union in the U.S. Department of State from 1989–90.