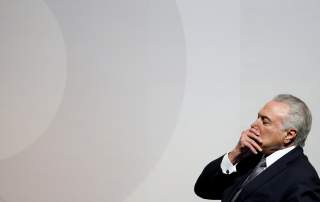 BRICS (Brazil, Russia, India, China and South Africa) will hold its ninth summit September 3–5 in Xiamen, China. Naturally, the international community will be eager to know about any new initiatives and agreements, particularly between China and Russia. The BRICS meeting, however, occurs at a time of increased challenges for Brazil, and it is debatable how much the country can continue to contribute to the bloc.

The South American giant impeached then-President Dilma Rousseff in August 2016, making Vice President Michel Temer head of state until the October 2018 elections. This means that President Temer will have been in office for around two years, with one left in his presidency. This is hardly sufficient time to formulate a concrete long-term foreign policy.

To complicate the situation further, President Temer was charged in June with corruption regarding alleged bribes from JBS, a meatpacking company. Then, in early August, he narrowly survived a new challenge:  the Chamber of Deputies voted 263–227 against having the Supreme Court commence a trial against him. On the economic front, Brazil is still attempting to overcome a years-long recession crisis; the Financial Times reported on August 24 that Brazil’s economy has “shrunk by 7.4 per cent in the past two years and the government is wrestling with ballooned budget deficits.”

In other words, President Temer will not travel to Xiamen with a quiet home front.

As for Brazil’s relations with its fellow BRICS members, the situation is currently mixed, with both positives and negatives developments. For example, President Temer visited Moscow in June to meet President Vladimir Putin with the goal of increasing bilateral trade between the two nations. Brazil-Russia trade reached $4.3 billion in 2016. Meanwhile, China is Brazil’s major trading partner, therefore it remains a priority for Brasilia to continue its close relationship with Beijing and perhaps seek investment opportunities via the BRICS-led New Development Bank, headquartered in Shanghai.

As for Brazil’s relations with India and South Africa, the idea of South-South cooperation has stalled. This is particularly true for India, as there have been hardly any new initiatives in Brasilia-New Delhi relations recently, apart from Prime Minister Narendra Modi’s visit to Fortaleza, Brazil, for the BRICS 2014 summit, and some defense-related initiatives (like the IBSAMAR exercises, the last of which occurred in 2016). If anything, India’s main priority regarding Latin America nowadays is Mexico, not Brazil.

Brazil-South Africa relations are slightly better than with India. For example, this past May, Brazilian foreign-affairs minister Aloysio Nunes Ferreira Filho visited several African nations, including fellow BRICS member South Africa, to jumpstart relations. Moreover, the 2016 free-trade agreement between the Southern African Customs Union and the Market of the Southern Cone, of which South Africa and Brazil are members, will likely increase commercial ties between the two countries.

The ninth BRICS summit arrives at a difficult time for Brazil. Its turbulent domestic politics and economic situation are not conducive to establishing a robust foreign-policy strategy. As for relations with fellow BRICS members, Brasilia is focused on increasing commercial ties in order to help jumpstart its economy. Hence, we can expect President Temer’s meetings with President Putin, President Jacob Zuma and President Xi Jinping to revolve around trade issues; a one-on-one meeting with Prime Minister Modi is required by protocol, although there have been no indications so far about an interest to increase Brasilia-New Delhi ties.

Since last year’s summit in Goa, India, there has been speculation about Brazil opting to leave BRICS. While it is unlikely that President Temer will make such a statement in Xiamen, Brazil’s current internal state may require a debate over how continued membership to BRICS would help Brazil, if at all.

W. Alejandro Sanchez is an analyst that focuses on geopolitical and defense related affairs, with a focus on the Western Hemisphere. His analyses have appeared in numerous refereed journals including Small Wars and Insurgencies, Defence Studies, the Journal of Slavic Military Studies, European Security, Studies in Conflict and Terrorism and Perspectivas.