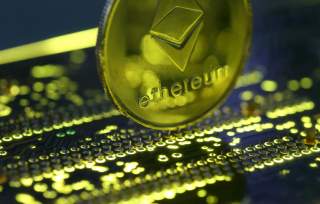 While these regulations are ostensibly in place for consumer and investor protection purposes, the GAO found that consumers aren’t being prejudiced by fintech companies any more than they are by other types of financial service businesses. In fact, consumers were more likely on a weighted basis to file complaints with the Consumer Financial Protection Bureau against traditional financial institutions than fintech startups.

WHILE THERE are hurdles and unknowns associated with embracing any new technology, the greatest risk to the United States is that of sitting by idly in a state of “paralysis by analysis” as other nations aggressively advance ahead. Though blockchain is still in the experimental stage, the race to develop and utilize it is in full force. The societies that master it first will win out on both the technological and financial fronts.

Cyberwarfare could soon become yesterday’s news as economic tech emerges as a battleground of the future. In addition to penetrating or destroying cyber networks, state actors will look to syphon off economic value and activity from their competitors, weakening their currencies in the process. Should America remain on its current trajectory, it could soon find itself standing at the precipice of a perfect storm of painful repercussions. These would include lost jobs and economic opportunity, forfeiture of technological and financial hegemony, and a hastened transition away from the dollar’s reserve currency status—which has bestowed ample benefits on the domestic economy for seventy years, has allowed the United States to finance its burgeoning national debt and has effectuated the use of sanctions as a powerful tool in the nation’s diplomatic toolbox.

The most immediate consequence would be a loss of economic opportunity for American citizens, as business models that incorporate blockchains and crypto-economic financial games will soon be substantial drivers of value, jobs and talent and GDP-level economic impact in the places they are allowed to incubate.

Loss of leadership in capital formation, which is quickly becoming a global phenomenon, would soon follow. Cryptocurrency ecosystems can create globally decentralized economic networks that pool capital and risk at a scale that has only been achievable by governments in the past. If the United States chooses to recuse itself from these developments, the wealth and foreign direct investment flows these systems create—and the benefits to small and medium-sized enterprises they provide—will accrue elsewhere.

To unlock their full economic potential, these networks must be integrated with financial, regulatory and legal systems. The countries that do this will realize substantial reductions in financial and regulatory overhead, along with an enhanced ability for regulators and law enforcement to monitor and police with less need for heavy-handed enforcement actions. These new digital currency networks will also weigh on the dollar’s reserve status should nations and private companies adopt them for business-to-business and cross-border payments without thought to the effects on the dollar.

For now, the U.S. dollar still remains the dominant currency in international payments and trade. In 2014, 52 percent of all such transactions were settled in dollars, 31 percent in euros and 5 percent in pounds, according to SWIFT. Further, dollars were involved in 88 percent of all foreign currency exchanges in 2016, according to the Bank of International Settlements. It can be argued that this prevalence is artificial given that U.S. gross domestic product (GDP) represents just 24 percent of the total world economy. Because of this imbalance, seemingly small declines in the demand for dollars, particularly if they outpace the rate of global GDP growth, will have broad ripple effects that could create a global financial crisis far more significant than witnessed in 2008.

The 1.0 version cryptocurrencies currently on the market, such as Bitcoin and Ethereum, do not represent a tangible threat in this regard because of scalability and volatility limitations—as the BIS noted in a recent report. However, price-stable cryptocurrencies that can be pegged to either fiat currencies or baskets of commodities and currencies, such as IMF Special Drawing Rights, are rapidly being developed. Once these stability mechanisms are solidified and relevant money transmission approvals are obtained, these currencies could become reliable mediums of exchange and settlement in global trade.

These payment networks will likely be faster, cheaper and more convenient than the existing banking system by orders of magnitude, and will therefore see widespread adoption. There is ample demand for a digital payment medium that circumvents the existing dollar-dominated banking networks—particularly in regions of the world where the encumbrance of exchange rate conversions represents a sizeable value drain on a transaction. Should these alternative settlement mechanisms be created by a nation other than the United States and be decoupled from the dollar, worldwide demand for the currency would quickly depress.

SIMILAR DOWNWARD pressure on the dollar—and disruption to the Bretton Woods system—will come from central banks transitioning from fiat to digital currencies. In April, Kim Yong-jin, South Korea’s Deputy Minister of Strategy and Finance, raised eyebrows by publicly calling on the country’s central bank to “consider the emergence of alternative payment methods such as cryptocurrencies as a threat to the existence of the traditional fiat system.”

Though not cryptocurrencies per se, central bank digital currencies will present additional digital alternatives to dollar-based settlement. For instance, the Chinese and Russian central securities depositories have been coordinating on blockchain usage for nearly two years, and are thought to be developing a smart contract–based scheme that would allow parties to settle directly using cross-currency swaps.

The exchange rates of such sovereign digital currencies will eventually be governed by protocols, algorithms, oracles and smart contracts, reducing the need for central banks to hold hard currencies in their foreign exchange reserves—of which dollars currently comprise 64 percent.

While the eventual loss of the dollar’s international supremacy, and the “exorbitant privilege” it has bestowed upon the American economy, is nearly certain, the speed at which this could transpire in the age of cryptocurrencies could wreak havoc on both the American and wider global economy if not properly managed. The United States has reaped substantial benefit by virtue of the dollar being the lubricant of the engine that is global commerce. It has also afforded the United States the ability to print money to pay its debts and to conduct experimental monetary policy as a means of kickstarting its economy, most notably in response to the 2008 Financial Crisis. Despite meager returns, investors have long flocked to U.S. Treasury bonds as a low-risk “safe haven” in times of turbulence. A stark devaluing of the dollar would prompt a sell-off of Treasury notes. Investors would then demand higher yields in exchange for purchasing them, effectively putting an end to the era of cheap borrowing.

This would prompt a decrease in domestic purchasing power and also render America a market of reduced importance for exporters vis-a-vis faster growing emerging markets in Asia, thereby leaving American citizens less wealthy relative to the rest of the world. Taxes would need to be raised to finance continued deficit spending and service the national debt, along with unfunded liabilities like Social Security and Medicare. This would need to occur in conjunction with public sector spending austerity measures, prompting a further throttling of economic growth.

AMERICA SHOULD seek to promote and foster responsible new innovation in ways that offer consumer and investor protections and fraud enforcement, without sacrificing the technological and financial leadership roles it currently enjoys.

As the recent Treasury report on financial innovation and regulatory reform articulates, Washington doesn’t have the luxury of devoting several years to studying the pros and cons of these ecosystems, only to then determine what role it wants to play. Rather, Washington must allow for these new global industries to be led by domestic entrepreneurs, innovators and thought leaders. Unlocking productive and responsible developments in this space requires leadership from either the White House or Congress to demand and provide the regulatory and definitional clarity that innovators have been seeking. Moving forward, a more progressive and forward-looking approach to regulating will be required, predicated on an understanding that Industrial Era–rules simply won’t work for long at the current rate of technological advancement.

As Schwab of the World Economic Forum articulated, an “agile governance” approach is required: “Regulators must continuously adapt to a new, fast-changing environment, reinventing themselves so they can truly understand what it is they are regulating.”

This means that Congress and current involved regulators—particularly the CFTC, SEC, IRS, FinCEN and the Federal Reserve—must define the meaning of cryptocurrencies in the context of capital raising, investment or utilities, and articulate boundaries for innovators in this space while providing breathing room for experimentation. Over-regulating or creating excessive ambiguity will only exacerbate the current problems.

The creation of federal and state venues for experimentation can help shepherd these technologies with meaningful regulatory oversight and keep them contained until the implications can be better understood. The regulatory sandboxes that have been successfully deployed by places like the UK, Hong Kong and Singapore can serve as helpful guide rails. Further, nonpartisan and not-for-profit think tanks and research institutions focused on the economy-wide impacts of blockchain and cryptocurrencies, as well as implications for the future international monetary system, must be established and capitalized. These institutions should focus on the deeper issues of crypto-economic models, governance structures for decentralized business networks and how blockchain and related technologies can be leveraged to help regulators and law enforcement do their jobs more effectively.