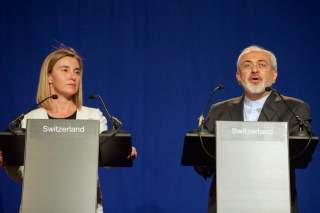 What’s the difference between a “good deal” with Iran over its nuclear program and a “bad deal”? A “good deal” is one that reduces the chance Iran will get a nuclear bomb, more than the available alternatives would. By that standard, the arrangement just announced in Lausanne, with specifics to be completed by June, is a good deal. It would greatly reduce the chance that the United States – or Israel – would ever have to face the danger or an Iranian bomb.

Why? There are both technical and political reasons.

Under the accord, Iran would cut its fleet of uranium enrichment centrifuges by more than two-thirds and get rid of over 95 percent of its low-enriched uranium. This is material that could otherwise give Iran a major head start on making highly enriched uranium for a bomb. (Because uranium enrichment is an accelerating process, enriching uranium to 4-5 percent U-235 is two-thirds of the work of enriching all the way to 90 percent for a bomb.) Iran would modify its Arak reactor to drastically cut its ability to produce plutonium, and commit, permanently, not to build facilities to separate plutonium from spent fuel. These facilities would be constantly watched, so that any effort to begin making bomb material would be noticed quickly, and inspectors would have broader access to other locations as well. In return, the complex web of American, European, and U.N. sanctions on Iran would be waived or lifted, step by step, as Iran took the actions called for in the deal.

The Lausanne approach would effectively take the option of racing to the bomb at the known, inspected facilities off the table for Iran, with a combination of limits and inspections that offer high confidence that any such effort would be noticed in plenty of time for the world to act – whether or not it precisely meets the Obama administration’s goal of ensuring that it would take Iran a full year to make the material for a bomb at these facilities.

Several provisions also increase the chance that any secret sites would be found in time. Cutting Iran’s stock of enriched uranium to just a few hundred kilograms would mean a secret site would need to be much bigger or take much longer to make material for a bomb, making it easier to detect and stop. Inspectors would have access to Iran’s stocks of extra centrifuges and key centrifuge parts, and the places where such parts are made – and all of Iran’s imports of such parts would be declared and monitored, so that any illicit procurement would be a violation of the pact. Broader access for inspectors would increase the chance of being able to go and check any site where well-documented suspicions arose. As in the past, good intelligence would remain the key to guarding against secret sites – but intelligence agencies’ knowledge and inspectors’ right to check on the ground complement each other in important ways.

The political impact might be even more important, making the job of those in Tehran pushing to build the bomb much harder. First, the technical constraints would make it more difficult for them to make the case that Iran could build a bomb before being found out and stopped. Second, a deal with all of the world’s major powers would greatly reduce the sense of threat that is among the bomb advocates’ best arguments. Having just signed a deal, the United States would certainly not be using military force against Iran’s nuclear program unless Iran grossly violated the pact – and with all of the P5+1 behind a deal, an attack would no longer be a plausible option for Israel, either.

Third, by lifting sanctions, the deal would create a flow of very real benefits to Iran – including to some of the most powerful players in the Iranian regime – which they would not want to put at risk with clandestine bomb efforts. Fourth, the deal would make clear that compromise with the West that really does contribute to Iran’s economic development is possible, strengthening advocates of compromise in Tehran. Finally, the agreement’s 10-25 year duration means that, if successful, an entire generation of Iranians will come of age in an era of reduced tension and confrontation with the West— creating new and powerful political constituencies against returning to confrontation on the nuclear issue. With all of those factors in play, Tehran’s nuclear hawks would have an almost impossible job in arguing that now was the time to rip up the deal and go for the bomb.

This deal is not about trust – on either side. Pick almost any recent speech from Iran’s Supreme Leader and you will see how much he despises and distrusts the United States. Instead, the deal is about using strict verification and a step-by-step approach that allows sanctions to be re-imposed if Iran breaches the accord to pursue U.S. national interests.

Of course, the deal is a compromise. Iran would be left with a substantial nuclear capability, and inspections would not by any means be “anytime, anywhere.” The limits on Iran’s uranium stocks and enrichment capacity would eventually expire, allowing Iran to increase its capabilities in the future. In essence, the deal buys time – time that should be used to enmesh Iran’s nuclear activities in a web of cooperation, giving the world deeper insight into its nuclear activities and plans and ensuring that any move toward the bomb would be quickly detected.

What are the plausible alternatives? One option would be to reject the deal and try to strengthen sanctions in the hope of pressuring Iran to accept still tighter restraints. Such an approach might work – but the risks are high. Without a deal, Iran would be able to build more centrifuges, fully test its more advanced machines (giving it a faster and easier-to-hide enrichment option), and build up its stock of low-enriched uranium. If the world saw that it was the United States that had walked away from a reasonable deal, it would be very difficult to keep key parts of the sanctions regime from unraveling. We could end up with more dangerous Iranian nuclear capabilities and weaker sanctions tools to push them back. In the end, that might lead to only two options – living with Iran within weeks of producing the material for a bomb, or launching military strikes.

Military strikes on Iran’s nuclear facilities are another option. They could destroy Iran’s major facilities, setting Iran’s program back for years. But Iran would almost surely respond – perhaps with expanded terrorist attacks against U.S. and Israeli interests, missile strikes, or attacks in the Strait of Hormuz. The possibility of provoking an even hotter regional war in the Middle East would be very real. And the clear demonstration of the need to deter future such strikes would strengthen the case for Tehran’s bomb advocates. Iran might well respond by pulling out of the nuclear Nonproliferation Treaty, kicking out inspectors, and moving to make nuclear weapons material at secret facilities. The deal would accomplish a longer delay in Iran’s program with far lower risks – both military and nuclear.

Overall, the deal announced in Lausanne is better for United States and world security than the available alternatives. It represents our last best chance to stop an Iranian bomb.