Blowback: Why Getting Tough on Russia over Ukraine Might Backfire 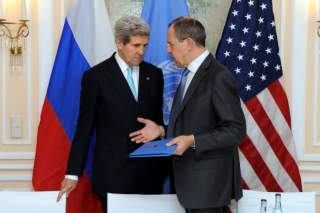 Since the Russian incursion into Crimea, U.S.-Russian relations––already shaky––have been in a downward spiral. The Obama administration has voiced strong criticism of Moscow’s actions and blacklisted several officials and individuals with close contacts to President Vladimir Putin and Bank Rossiya. The president has recently announced that more comprehensive sanctions might be enacted, if Russian actions undermine Ukraine’s upcoming elections. Simultaneously, however, Secretary Kerry has engaged Russia in negotiations over reducing tensions in eastern Ukraine. To many members of Congress and the strategic community, this approach is too weak.

The outrage over Putin’s behavior is justified and understandable. Currently, pro-Russian militias in eastern Ukraine double down on the Ukrainian security forces with Moscow’s help, leading to horrible clashes in the streets. However, every serious assessment of American interests must take into account that Russian cooperation––whether one likes it or not––is required on an array of global issues, including vital U.S. national-security concerns.

The most obvious issues are Iran and Syria, adversaries with nuclear ambitions in one case (Iran) and chemical weapons in the other (Syria). Although Washington and Moscow agree that Tehran must be kept from having nuclear weapons, disagreement lingers over the means to achieve this goal. Russia is traditionally skeptical of imposing sanctions on other states and it took quite an effort to get Putin’s thumbs-up for the comprehensive sanctions regime currently in place. With respect to Syria, things are even more complex. Washington wants Assad to leave, whereas Moscow is still supporting him and his regime. It was Obama’s declaration to carry out air strikes that forced Putin’s hand. The latter eventually pressured Assad to give up his chemical arsenal in exchange for military restraint on the part of the U.S.

Now the challenge is to maintain that level of unity in difficult times. Tehran and Damascus might be emboldened by any move that signaled Russian willingness to weaken pressure. Russia’s Deputy Foreign Minister Sergei A. Ryabkov already alluded to the option of taking “retaliatory measures” against the West in the Iran context, “if they force us into that.” There is no shortage of opportunities to turn words into actions. For example, Moscow and Tehran are presently in talks over a so-called oil-for-goods program, under which Iran would import Russian goods and equipment worth up to $20 billion in exchange for 500,000 barrels of oil per day.

Another key issue for Washington is nuclear security. Since nuclear material is still fairly vulnerable in many places in Russia, and the United States is the most likely target of nuclear terrorism, the adequate protection of fissile and radiological material in Russia should be a priority for the United States. Against this backdrop, the Department of Energy’s recent decision to retract a funding request to allocate money for Russian response forces in charge of defending nuclear material was very unwise.

It is not without irony that the decision to shelve a cooperative measure in which the United States has a key interest was not a retaliatory move on the part of Russia, but rather, on the part of Washington. This shows that the danger of no longer getting priorities straight is a real one. It may sound cynical to most observers, but Putin’s actions in Ukraine have affected American values, not American interests. From a selfish perspective, current events in Ukraine are a sideshow compared to Iran, Syria, and nuclear security.

Washington needs to make a decision about its foreign-policy priorities, if tensions in eastern Ukraine are not reduced. Giving the events in Ukraine priority over all other international developments is a hazardous strategy. Negotiations have gotten us nowhere, and way more assertive steps against Russia are not likely to make Putin give in, since he seems to be determined not to lose his influence over eastern Ukraine and eager to demonstrate Russia’s power. Furthermore, a much tougher stance on Russia might backfire easily, since Moscow might react by undermining fundamental American national-security interests. The dual approach of enacting targeted sanctions against Russia on the one hand and engaging Moscow on the other is messy and troublesome. And yet, there is no better alternative for the time being.

Sven-Eric Fikenscher is a Research Fellow with the International Security Program and the Project on Managing the Atom at Harvard University’s John F. Kennedy School of Government.