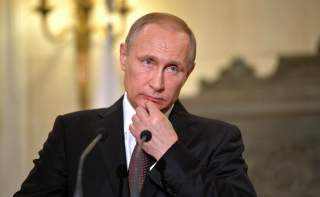 THE TWO Chinese characters that make up the word “crisis” can be interpreted as meaning both “danger” and “opportunity.” Russia today offers your administration not only a serious challenge but a significant opportunity.

Russia is no longer the Evil Empire the United States confronted over decades of Cold War. Nonetheless, Russia remains a player whose choices affect vital U.S. interests profoundly across the agenda of global issues. First and foremost, Russia remains the only nation that can erase the United States from the map in thirty minutes. Second, Russia is key to preventing nuclear terrorism as well as proliferation of other weapons of mass destruction and missile-delivery systems. Third, Russia’s decisions on whether to share intelligence, or withhold it, significantly affect odds of preventing attacks by terrorists on U.S. citizens and assets across the world. Fourth, Russia is the largest country on Earth by land area, bordering China to the East, Poland in the West, and the United States across the Arctic. (Thus, claims that it is only a “regional” power miss the fact that it abuts every important region.) Fifth, Russia’s Soviet-era scientific establishment and post-Soviet achievements make it a global leader in science and technology, particularly in high-tech military hardware. These talents allow it to mount formidable cyber capabilities, second only to the United States, and to produce impressive weapons. The only way U.S. astronauts can currently travel to and from the International Space Station is to hitch a ride on Russian rockets. The cofounder of the most advanced digital company in the world, Google, is Russian-born Sergey Brin. Sixth, Russia is prepared to fight: it has demonstrated both the capability and the will to use military force to achieve its objectives, from annexing Crimea to bolstering Bashar al-Assad’s regime in Syria. Seventh, Russia’s potential as a spoiler is difficult to exaggerate—from selling advanced systems like S-300 air defenses to Iran to aligning militarily with China.

On their current trajectory, the United States and Russia face a serious risk of stumbling into a war neither side wants and which would be catastrophic for both. You have been elected to change the way Washington does business, and nowhere is that needed more than in dealing with Moscow. While the mainstream press and punditry have panned your campaign pledge to put “America First,” we suggest you remind everyone of the mantra under which both Democratic and Republican presidents fought the Cold War. It affirmed that Americans’ primary purpose in the world was to “preserve the United States as a free nation with our fundamental institutions and values intact.” To that end, they set about building a new world order aimed at advancing the cause of peace, prosperity and freedom for all: for Americans, their allies and other nations, in that order. While some now see that hierarchy as shortsightedly selfish or unworthy of a great power, the brute fact is that the survival and success of the United States is the essential prerequisite for American power to be applied to achieve any other objective in the world. As part of your America First doctrine, we urge you to prioritize America’s most vital interests and, from that foundation, engage Russia on what matters most to American citizens’ survival and well-being.

IN ORDER to understand the way ahead, it may be useful to briefly review how America arrived at the current impasse. Ironically, as we mark the twenty-fifth anniversary of the disappearance of the Soviet Union on Christmas Day 1991, U.S. relations with Russia are in their worst state since the high Cold War. All three post–Cold War administrations—Bill Clinton’s, George W. Bush’s and Barack Obama’s—entered office seeking to improve relations with Moscow. Each left office with the relationship in worse condition than when he arrived. President Obama began by announcing a “reset” in relations with Russia to secure Moscow’s cooperation on a number of priorities, including his vision of a world free of nuclear weapons. As his term ends, U.S. and Russian aircraft are operating in close proximity, attacking targets in Syria with minimum communication and no coordination. This risks an unintended collision that could lead to direct conflict. The United States has deployed a “tripwire” force of more than one thousand combat troops between the three frontline Baltic states, and Russia has responded by deploying advanced air defenses and nuclear-capable short-range missiles to its enclave in Kaliningrad. For the first time since the 1980s, military planners on both sides have been reexamining options that include the actual use of nuclear weapons. This outcome serves as a stark reminder that aspirations, however worthy, are not enough. Detached from coherent strategy and sustained operational execution, such aspirations not only predictably fail, but also dash hopes and incite suspicions.

Ukraine and Syria offer similar cautionary tales. Having encouraged Ukrainians to rise up against their corrupt, albeit democratically elected, president, the Obama administration and its European allies proved unwilling to mount a military response to Russia’s military intervention. Today, Ukraine is a flailing, almost failing state with no good news in sight. Syria provides a further bloody reminder that where parties are not willing to kill and die for their objectives, others who are will prevail. After announcing a grand objective—“Assad must go”—Obama was unwilling to commit American military forces to achieve that goal, leaving a vacuum that Vladimir Putin stepped in to fill. The point is not that the Obama administration should have sacrificed American lives to defend Syrians. We share the president’s judgment that American national interests do not justify that level of expenditure of American blood and treasure. Rather, the point is that successful strategy requires aligning ends and means. Where the means one is prepared to commit are inadequate to achieve grander objectives, goals must be adjusted accordingly.

To compensate for its policy failures, the Obama White House crafted two narratives. On the one hand, it claims that Russia is a loser who “doesn’t matter anymore,” so to speak. No longer a global player, it is a power in terminal decline: its economy collapsing, its population shrinking and its last-century industrial base no longer making anything the world wants to buy. On the other hand, as a high-level member of the administration confided with some embarrassment, in its final years, when facing intractable international problems, Obama’s instinct has been to “blame Russia first.” In the president’s own words,

[Putin’s] got to make a decision: Does he continue to wreck his country’s economy and continue Russia’s isolation in pursuit of a wrong-headed desire to recreate the glories of the Soviet empire, or does he recognize that Russia’s greatness does not depend on violating the territorial integrity of other countries?

As Henry Kissinger has explained most clearly, what Obama’s “or” really means is that Putin’s Russia should repent, reverse course, and follow in the footsteps of Germany and Japan in accepting its place in a unipolar, American-led international order. In Kissinger’s words, “The U.S. has put forward no concept of its own except that Russia will one day join the world community by some automatic act of conversion.” But as he notes, this is a fantasy: Russia is too big, too powerful and too committed to maintaining its sovereignty as a great power to become a supplicant in an American-dominated world order. Moreover, while the Soviet Union did lose the Cold War and its borders were rolled back to those resembling Catherine the Great’s, unlike Germany and Japan, it was not defeated in a hot war, not occupied and thus not shaped by the United States in the way states whose constitutions were written by the victor were.

Kissinger’s alternative—with which we strongly agree—is to seek to integrate Russia into an international order that takes into account Moscow’s minimum essential interests. That would begin with recognition that Russia remains a great power with sovereign interests and from there explore “whether their concerns can be reconciled with our necessities.” Critically, this would mean treating Putin personally as the strong leader of a major power he clearly is, and is recognized by his fellow citizens to be. It would also mean avoiding gratuitous disrespect.

THE OBJECTIVE of American policy is not to placate Russia or please Putin. Rather, it is to advance vital U.S. national interests. As seen during Obama’s second term, when treated primarily as a “foe,” Russia can undermine important American objectives. If it can be persuaded to act more as a partner, within the framework of a sustainable, if difficult, working relationship, Moscow can help advance U.S. foreign-policy objectives in a number of ways.

First, productive relations between Russia and the United States are essential to avoiding war, including nuclear war. As Washington discovered in the Cold War after the Soviet Union acquired a superpower nuclear arsenal, technology has imposed on the two countries an inescapable partnership and absolute requirement for sufficient cooperation to avoid the nuclear war of which both would be the first victims. Technology has made America and Russia, in effect, Siamese twins. However angry or even disgusted either is at the other, neither can strangle the other without simultaneously committing suicide. This ugly but inescapable fact serves as the starting point in this relationship.