A Bold Idea for Security Reform in the Indo-Pacific Region 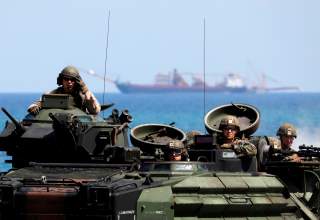 Former Acting Secretary of Defense Patrick Shanahan’s recent speech at the Shangri-La Dialogue was expected to herald a new approach to the Indo-Pacific region by the United States. But the speech, and the subsequent release of a new Indo-Pacific strategy by the Department of Defense, did not announce any bold new initiatives nor offer specifics about operationalizing America’s Free and Open Indo-Pacific (FOIP). This is unfortunate and represents a missed opportunity. Although America has promoted FOIP and ramped up its Freedom of Navigation Operations (FONOPs) program in the South and East China Seas during the past year, it needs to do more to demonstrate its long term commitment to the Indo-Pacific region to its allies and partners. One way it could do this is by establishing a multi-national Standing Indo-Pacific Maritime Group (SIPMG).

A standing maritime task force of this kind, based on the Standing NATO Maritime Groups (SNMGs), has been proposed for the Pacific theater many times. Unfortunately, the lack of an alliance organization equivalent to NATO in the Indo-Pacific has prevented the easy replication of such a group. Yet a fifty-year old report from the Naval War College provides a blueprint for establishing such a force. By leveraging its treaty alliances in the Pacific, America could establish a SIPMG in coalition with Japan, Australia, South Korea, the Philippines and/or Thailand. Then, applying an open architecture concept, participation could be expanded to include any nation that supports FOIP and can provide forces. Britain, France, India and Canada would all be prime candidates to join the group.

An open-ended SIPMG would provide a flexible option for nations to demonstrate their support of the rules-based international order. Participation would not require a formal treaty alliance nor require a long-term allocation of assets. Working together to coordinate ship deployments, participating nations could ensure a combination of destroyers, frigates, amphibs and replenishment ships—between four and eight total—are maintained. Using a variable mix of ships would increase the ability of nations to contribute forces. It would also prevent any single nation from stretching its capacity to the breaking point and provide a more cost-effective alternative for those looking to maintain a steady-state naval presence in the Indo-Pacific. Rather than supporting costly deployments of individual task groups, nations participating in the SIPMG would share operational costs. And just like the SNMGs, command of the SIPMG could rotate periodically between participating nations, which would demonstrate the collaborative nature of the group.

The number and type of ships assigned would determine its capacity, but the group could principally focus on executing low-end missions like law enforcement and maritime security operations. This would give the SIPMG a key role in developing the professionalism and proficiency of the nascent coast guards in the western Pacific and Indian Ocean regions. It would also help alleviate an identified lack of investment in the coast guard training by the littoral states of Southeast Asia. Furthermore, the SIPMG could improve humanitarian assistance and disaster relief (HA/DR) readiness in the Indo-Pacific by serving as a quick-reaction force for several months each year during the typhoon season.

HA/DR operations are of particular concern not only for the littoral nations of the Western Pacific, but also those in the Indian Ocean region. It is also an area where several nations are already well positioned to provide forces. Japan, Australia, South Korea and Singapore have made significant investments to expand their amphibious capabilities. In conjunction with America’s forward deployed amphibious forces, a combination of LHD/LPD/LST/LPH ships, rotary-wing aircraft and surface landing craft could be assembled to supply the communications, lift, reconnaissance and ship-to-shore capabilities necessary to support HA/DR operations. More importantly, having those assets working together in a SIPMG on a routine and continual basis will help develop amphibious interoperability, improve joint operations proficiency and increase overall efficiency. It will also establish another avenue to build the personal and professional relationships between naval leaders of the region that will carry-on long after individual tours and/or deployments with the SIPMG are over.

For the United States, the creation of a SIPMG would require only minor changes to its current force posture alignment. With a slight adjustment to deployment schedules, the United States should be able to sustain a continual one to two ship presence in a SIPMG. Moreover, a SIPMG headquarters located in Singapore would allow the United States to leverage the Commander, Task Force 73 (CTF 73) and Destroyer Squadron Seven (DESRON 7) organizations located there. Ships assigned to the SIPMG could also be plugged into CTF-73’s exercise and engagement programs that already support the law enforcement, maritime security, and HA/DR mission skillsets, including Cooperation Afloat Readiness and Training (CARAT), Southeast Asia Cooperation and Training (SEACAT) and Pacific Partnership.

In the near term, SIPMG operations could remain centered in the western Pacific to take advantage of existing organizational and support infrastructures. Long term, the goal should be to expand the group’s operational emphasis out into the neglected regions of the Indo-Pacific, including the execution of coordinated patrols in Oceania and the western Indian Ocean. Expanding outward would help shift attention away from the contested waters of the South and East China seas, shore up identified areas of weakness and address the concerns of India and Australia. Increased presence operations in these waters would also broaden the competition space between those supporting FOIP and revisionist powers challenging the norms of the rules-based international order.

In summary, establishing a SIPMG would signal the United States’ long-term commitment to FOIP, facilitate improved interoperability between the region’s navies and coast guards, and demonstrate the ability of allies and partner nations to mutually support one another. An open-ended SIPMG would provide a measure of political maneuver space for potential participating nations, especially those concerned with becoming enmeshed in a contest between the United States and China. It would also spread costs among all participating nations and lessen the burden of any single nation supporting deployed task groups. Finally, a SIPMG focused on law enforcement, maritime security, and HA/DR operations would directly contribute to the promotion of peace and stability in the Indo-Pacific region and maintenance of the rules-based international order. Thus, the creation of a SIPMG represents a low-cost, high reward option in the “pursuit of preparedness, partnerships, and the promotion of a networked region.” It is an idea whose time has finally come.

CDR Bob Jones is a career Surface Warfare Officer currently assigned as a Federal Executive Fellow at the Center for a New American Security. Most recently, he served as the Commanding Officer of Naval Beach Unit Seven (NBU-7) in Sasebo, Japan. The views expressed are those of the author and do not reflect the position of the United States Navy or Department of Defense.