Is Bolsonaro Just the Latest Installment of a Populist Revolution? 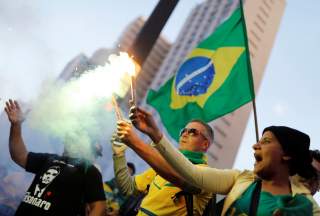 He “is a notable shift in the Latin American political system” in that he “is willing to work with the U.S.” and has shown “enthusiasm for President Trump,” said the ex-Breitbart News chief. As Bannon works to unite populist forces worldwide in Brussels in January for the first official meeting of his “movement,” Bannon says you can judge Bolsonaro by the company he keeps.

“Matteo Salvini Italy and others signaled their support,” Bannon said. “That’s a welcome development and show that real change is happening—worldwide—whether the establishment Party of Davos like it or not . . . President Trump has already called him.”

“Had a very good conversation with the newly elected President of Brazil, Jair Bolsonaro, who won his race by a substantial margin,” Trump said on Twitter. “We agreed that Brazil and the United States will work closely together on Trade, Military and everything else! Excellent call, wished him congrats!”

Sarah Huckabee Sanders confirmed the call, saying in a statement that the leaders will “work side-by-side to improve the lives of the people of the United States and Brazil, and as regional leaders, of the Americas.”

Bannon maintains that the Bolsonaro victory is a rejection of not only the “politics of catastrophe” in Venezuela, but also the Davos-friendly, business managerialism of Mauricio Macri’s Argentina.

“Venezuela and Argentina have turned themselves over to foreign intervention,” Bannon said. “Today Brazil voted to save themselves with a patriot and a nationalist like Captain Bolsonaro.”

“I’m sorry to say this, but comparing Bolsonaro to [controversial Philippines President Rodrigo] Duterte is not extreme or alarmist,” said Washington Post reporter Vincent Bevins, who has covered both countries. “I know both countries fairly well, and I think Bolsonaro is more radical than Duterte in both rhetoric and political positioning.”

Said Bevins: “Here in Brazil, people think the Duterte comparison is some ridiculous reference to another planet, but the Philippines under Duterte is real, I go there all the time, life there exists. And if we’re honest, Duterte’s program was not as maximalist.”

But Trump gives every sign that he is enthusiastic about the results of the election. “You’re going to see this White House work with Brasilia,” Bannon said, whether it be with the controversial “caravan” and the larger migration crisis, or on Venezuela, on which the administration has taken an underratedly-hawkish line, going so far as to reportedly weigh a military intervention. A Department of Defense consultant noted Sunday that Bolsonaro’s strident pro-Americanism is “really anomalous” for a major South American politician.

How will these factors manifest for those who favor foreign-policy restraint? On one score, restrainers applaud greater regional cooperation—and even a renewed focus on a region that is more firmly U.S. turf. Migration and violent drug trafficking are not problems that are going away. Indeed, a ramp-up, if anything, is likely in the coming years.

But on the other hand, most restrainers counsel against outright military escalation, on Washington’s part, against Venezuela.

“Perhaps the United States can provide humanitarian assistance through other Latin American countries directly or acting through UNASUR and OAS, but regime change and ‘stability’ operations should be off the table,” says Kurt Couchman, vice president at Defense Priorities. “Democratic socialism’s devolution . . . into brutal authoritarian government, rampant social dysfunction, and economic calamity is tragedy on a massive scale,’ but “American intervention could easily lead to a guerrilla war. . . . Further instability could ultimately overwhelm the U.S. southern border with narcotics smuggling and migration.”