Is Bolton Ready to Take on Pakistan? 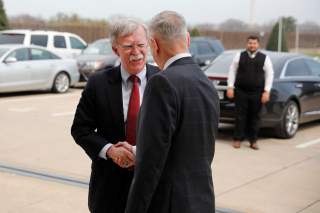 Media coverage of the appointment has thus far largely focused on Ambassador Bolton’s outspoken, hawkish record on Iran and North Korea and their rogue nuclear weapons programs. As challenging as those portfolios are, they could eventually be eclipsed by America’s fast-deteriorating relationship with Pakistan and the war effort in neighboring Afghanistan.

Bolton will assume office at a highly volatile juncture in U.S.-Pakistan relations. President Trump has broken sharply from past policy, adopting a decidedly more muscular and punitive approach toward Islamabad. While long overdue, the course correction carries real risks. Skeptics have already conjured doomsday scenarios of state collapse and nuclear proliferation, and Bolton has expressed reservations of his own. He would do well to resist the lure of the Beltway consensus and the comfort of the devil we know.

President Trump’s infamous first tweet of 2018 signaled an end to the increasingly untenable status quo with Pakistan. He denounced the country’s “double game” of ostensibly backing the U.S. war effort in Afghanistan while providing support and safe haven to the Taliban and Haqqani Network. Such duplicity, the president insisted, would no longer be a costless affair for Islamabad.

While Trump’s predecessors bemoaned this double game, they deemed the status quo (just barely) tolerable, terrified at what might follow a rupture in bilateral relations. Academic lectures and diplomatic protests became the default response to repeated bouts of Pakistani intransigence. And Islamabad proved remarkably effective at parrying any sign of pressure with cosmetic reassurances, forestalling decisive action until Washington’s attention was again diverted elsewhere.

No longer. The Trump administration has imposed deep cuts in U.S. security aid, slowly expanded drone strikes inside Pakistan, and successfully lobbied to have Pakistan “gray-listed” at the Financial Action Task Force, which monitors global money-laundering and terror-financing. Just this week the State Department levied new sanctions on several organizations and individuals associated with the Lashkar-e-Taiba, a notorious terrorist group that has operated openly in Pakistan for decades.

Foreign Policy reports that additional measures are under consideration. They include “revoking Pakistan’s status as a major non-NATO ally [and] permanently cutting off the U.S. military aid that was suspended.” It adds:

The White House is also weighing even more drastic measures to include visa bans or other punitive measures against individual members of the Pakistani government, military, or ISI intelligence service suspected of allowing the Taliban and Haqqani militants to operate from sanctuaries inside Pakistan

At first blush, the tough-talking Bolton would appear an ideal candidate to advance the president’s new Pakistan strategy. He is certainly under no illusions about the scope of the problem. This February, Bolton argued that Islamist radicals “already controlled the [Pakistani] military’s intelligence wing and are [an] increasing threat across the officer corps.”

He ultimately agrees a tougher line toward Islamabad is warranted and has lamented how “Obama didn’t pressure [Pakistan] enough.” Importantly, he has also acknowledged the core, inescapable truth of the Afghan conflict: it “will be won or lost in Pakistan.”

At the same time, however, Bolton has publicly cautioned against applying excessive pressure on Pakistan. “If you push too hard, this government in Pakistan is fragile. It has been since the partition of British India,” he argued in an August 2017 Breitbart interview.

Too much pressure, he warned, would risk “flipping Pakistan itself into the terrorist camp.” If radicals were ever to seize power, “it wouldn’t just be another base to launch terrorist operations against us or Western Europe. It would be a terrorist country with nuclear weapons, so it would be Iran or North Korea on steroids.”

Of course, this is all true. Concerns about Pakistan’s unstable cocktail of terrorism and nuclear weapons are understandable. Islamabad reportedly possesses 130–140 nuclear warheads and is building its nuclear stockpile faster than any other nation. Of the roughly fifteen known nuclear sites throughout the country, at least six have reportedly been the target of terrorist attacks. Worse still, the efficacy of Pakistan’s nuclear safety protocols have been called into question before.

Yet these nightmare scenarios have frequently been overstated and used by Islamabad to shield itself from criticism and pressure over its double game. Pakistan may well be “too dangerous to fail” but for too long that’s meant “free to undermine America with impunity.”

In reality, curtailing aid or sanctioning Pakistan’s generals won’t put its nuclear arsenal any closer to the hands of terrorists. U.S. pressure won’t “flip it” into China’s camp: it has been there for decades. In fact, China may well have more to fear from Pakistan collapse than America does.

Nor is the Pakistani state on the verge of collapse, though its citizens are under constant assault from religious fanatics. The real threat to the Pakistani state comes not from U.S. pressure but from the culture of violent jihad encouraged and propagated by its own military and intelligence establishment. In Islamabad’s own sobering estimation, at least thirty thousand Pakistani citizens have perished at the hands of Islamist militant attacks in just the last decade. Put another way, Pakistan has suffered the equivalent of a 9/11 terror attack, every year, for ten years.

Unfortunately, things will likely have to get worse before they get better. Like a drug addict Islamabad will have to be weaned off its addiction to terrorism, and it is unlikely to be a short or painless process.

Nevertheless, President Trump’s maverick instincts regarding Pakistan are correct. A break from the Beltway’s conventional wisdom is long overdue. He will be relying on his new National Security Advisor to demonstrate the grit, resolve and bureaucratic acumen required to oversee this challenging but necessary shift in U.S. strategy.

Jeff M. Smith is a research fellow in The Heritage Foundation’s Asian Studies Center. Nathaniel DeBevoise is a member of the think tank’s Young Leaders Program.