Bombs Away: The 5 Most Deadly Attack Aircraft 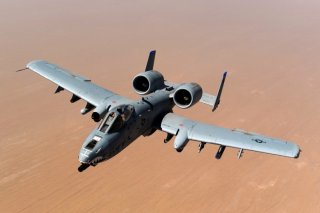 Is the dedicated attack aircraft a dying breed? Few air forces are developing new attack aircraft, preferring to rely on fighter-bombers carrying precision-guided munitions to do the dirty work of close air support and battlefield interdiction. But then it has always been such; tactical attack has long been shunted to the side by air forces more interested in fast fighters and majestic bombers. Many of the attack aircraft used in World War II began design life as fighters, only becoming attack planes when they “failed.” And yet these attack aircraft have, over the years, ably performed one of the most critical airpower missions—the destruction of the fielded forces of the enemy, and the support of friendly ground troops.

This article examines five modern aircraft that fill the very old role of ground attack. One of these aircraft has served since Vietnam; another has yet to fly a combat sortie. All are specialized (or have become specialized) for attacking enemy forces in tactical situations, and most have served in a variety of circumstances that emphasize the basic flexibility of the attack mission.

The A-10 Warthog was born of inter-service strife. In the late 1960s, the long-running fight between the U.S. Army and the US Air Force (USAF) over close air support birthed competing programs, with the Army supporting the Cheyenne attack helicopter and the Air Force sponsoring the A-X program. Problems with the Cheyenne, combined with the prospect of the A-X, resulted in the cancellation of the former. The latter eventually became the A-10, an aircraft built around a heavy gun, and specialized for killing Soviet tanks.

The A-10 served effectively in the Gulf War, wreaking havoc on Iraqi vehicle convoys despite early USAF efforts to exclude it from the theater. The A-10 also served in the Iraq and Afghanistan wars, and has most recently seen action against ISIS. Although the Warthog (as it is affectionately known) rarely kills tanks anymore, it has proven an extremely effective counterinsurgency aircraft, with slow speed and a long loiter time.

The Air Force has attempted to eliminate the A-10 several times since the 1980s. The USAF argues that the plane is not survivable in contested airspace, and that multirole fighter-bombers (from the F-16 to the F-35) can fulfill its role more safely and efficiently. The strident A-10 pilot community, the U.S. Army, and the U.S. Congress continue to disagree, however. The latest political battle over the Warthog proved so frustrating for one Air Force general that he declared that any USAF personnel who sent information on the plane to Congress would be committing “treason.”

Like its American counterpart, the Su-25 is slow, well armored and capable of delivering an immense amount of ordnance. Designed, like the A-10, for attack missions along the Central Front in a NATO-Warsaw Pact conflict, the Su-25 has been adapted to a variety of new circumstances.

(Recommended: 5 Weapons Russia Could Use in an Arctic War)

The Su-25 has fought in a wide variety of conflicts since its introduction. It first saw service in the Soviet invasion of Afghanistan, as a counterinsurgency aircraft. The Iraqi Air Force used Su-25s extensively against Iran in the Iran-Iraq War. Su-25s have flown in many of the wars associated with the collapse of the Soviet Union, including the Russo-Georgian War of 2008 and the more recent war in Ukraine. Rebel Russian surface-to-air missile launchers shot down several Ukrainian Su-25s before downing a Malaysian civilian airliner. Last year, when it became apparent that the Iraqi National Army could not manage ISIS on its own, the Su-25 “Frogfoot” reentered the spotlight. Iran offered the use of its Su-25 fleet, and Russia purportedly rushed a delivery of aircraft into Iraqi service (although the aircraft probably came from Iranian stocks, seized in the 1990s from Iraq).

The Embraer Super Tucano is an outwardly modest airplane. It looks a bit like a North American P-51 Mustang, an aircraft that entered service over seventy years ago. The Super Tucano fills a very specific need: attack and loiter capability in noncontested airspace. This makes it an ideal counterinsurgency platform, capable of tracking insurgents, targeting them when flushed and hanging around until the job is done. The Super Tucano is, more or less, the perfect COIN aircraft.

The Super Tucano flies (or will soon fly) with over a dozen air forces in South America, Africa and Asia. The plane helps Brazil manage its vast Amazonian hinterland, and facilitates Colombia’s fight against FARC. The Dominican Air Force uses the Super Tucano to fight against the drug trade. In Indonesia, the aircraft helps hunt pirates.

After years of struggle, the USAF finally managed to get its hands on a squadron of the planes, with the intention of using them to increase the effectiveness of partner air forces, including the Afghan National Air Force. The Super Tucano is perfect for the ANA; easy to maintain and fly, it has the potential to give the Afghan Air Force a key advantage over the Taliban.

In the early years of the Vietnam War, the USAF came to appreciate the need for a big, heavily armed aircraft that could hang around the battlefield, delivering gunfire when Communist forces either emerged to attack, or were flushed from hiding. The Air Force initially developed the AC-47 “Spooky,” a C-47 transport plane equipped with guns mounted in the transport bay.

The Spooky proved effective, and a CAS desperate Air Force decided that larger aircraft might do even better. Developed from the C-130 Hercules transport, the AC-130 is big, slow and utterly hapless against enemy fighters or a serious air-defense network. Several AC-130s were lost in Vietnam, and one was lost to a shoulder-fired missile in the Gulf War.

But in its element, the AC-130 absolutely chews enemy ground positions to pieces. It can orbit an enemy position endlessly, delivering heavy gunfire and a large selection of alternative ordnance. The AC-130 provides eyes on the battlefield, along with the capability to kill anything that moves. AC-130s served in Vietnam, the Gulf War, the invasion of Panama, the Balkans conflict, the Iraq War and operations in Afghanistan. Some reports suggest a variant has been optimized for fighting zombies.

The Textron Scorpion has never dropped a bomb, fired a missile or flown a combat sortie. But someday it may, and this could help change the market for military aviation in the 21st century. The Scorpion is a sub-sonic jet aircraft carrying a very heavy armament. It lacks the gun power of either the A-10 or the Su-25, but carries advanced avionics and is light enough to risk on various ISR and attack missions.

The Scorpion has the potential to fill an important niche in many air forces. For a long time, air forces have been reluctant to acquire “tweener” aircraft, planes that fulfill several critical functions, but that don’t carry the same prestige and glitz as a major fighter. Given the rapid increase in fighter costs, however, and the fact that many air forces desperately need dedicated attack aircraft in order to maintain internal order and patrol borders, the Scorpion (as well as the Super Tucano) would seem to make sense.

In a sense, the Scorpion offers a high-end counterpart to the Super Tucano. A developing air force could do far worse than investing in both aircraft, which would give plenty of options with respect to ground attack, while also offering (through the Scorpion) a modest air-to-air capability.

There’s a reason most of these aircraft ceased production decades ago. The attack aircraft has never been particularly popular, as a type, with the world’s air force. Close air support and interdiction, especially at low altitude, are exceedingly dangerous missions. Attack aircraft too often operate along the seams of interservice divisions, sometimes falling victim to conflicts between armies and air forces.

To replace attack aircraft, modern air forces have concentrated on improving the precision-attack capabilities of fighter-bombers and strategic bombers. Thus, many of the close air support missions conducted by the USAF in Afghanistan came from B-1B bombers, aircraft originally intended to deliver nuclear strikes against the Soviet Union.

But as the recent battles in Syria, Iraq and Ukraine have indicated, the dedicated attack aircraft still has an important role to play. If the traditional military-industrial providers in the United States and Europe can’t fill this gap, then (relative) newcomers like Textron and Embraer may fill the gap.