Bombs Away: Why the Pentagon Doesn't Need an Increased Defense Budget 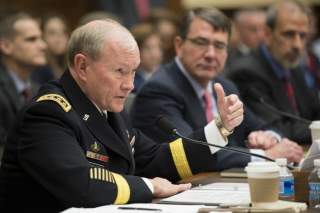 As fiscal year 2016, which begins on October 1, 2015, draws ever closer, the subject of how much and how America should spend on defense, given the threats and fiscal challenges this nation faces, has once again become front and center. Steadily increasing chaos and security challenges internationally have come into sharper focus, while in the political realm, most of the Republican candidates for president are making the size of the defense budget a campaign issue. Meanwhile, President Obama has vowed to veto a federal budget that gives the Pentagon relief from the budget control caps that does not do the same for the nondefense portion of the federal discretionary budget. Although FY 2016 is almost upon us, it does not appear that the Congress will pass a budget before the start of the fiscal year, forcing all federal agencies, including the Pentagon, to operate on a continuing resolution.

According to the testimony given at the confirmation hearings for the five new members of the Joint Chiefs of Staff, the international situation has never been more chaotic. They see Russia as the greatest threat, followed by China, North Korea, Iran and ISIL. The new Secretary of Defense, Ash Carter, echoes these claims and goes so far as to call Russia an existential threat. Moreover, the new service chiefs and most of the Republican candidates argue that, under the Obama administration, defense spending has been cut so drastically we cannot deal with the threats we now face.

But the real issue is not the amount we spend on defense but how we are spending it. In fact, the current level of defense spending is more than adequate. The defense budget for FY 2016 amounts to about $600 billion. In real terms, this exceeds the amount we spent on average in the Cold War and accounts for between one third and one half of the world's total military expenditures, depending upon whether one uses purchasing power parity or just straight dollars. Moreover, when one adds in the amount our allies spend, we account for somewhere between 70 and 80 percent of global military expenditures. Our greatest strategic threat, Russia, spends about $80 billion, less than our Saudi Arabian ally. Moreover, this amount is less than it seems, as the decline in the value of the ruble and the price of oil has had to delay Russian plans for modernizing its force. Even China spends only about one third of what we do.

But advocates of increasing defense spending claim that the portion of the gross domestic product spent on defense is less than at any time since the pre-Korean War days. What does such an argument say about our needs and strategy? If the GDP goes down and the threat goes up, should we decrease the Pentagon budget? Since when is defense (or any other area for that matter) entitled to a fixed share of our nation’s economy?

Advocates of increasing defense spending above the levels proposed by Obama also argue that since defense is such a small share of the overall federal budget it should not be cut to help us reduce our deficit. Do they want instead to continue to slash funding for areas like the highway trust fund, the size of the foreign service, medical research, and all other areas that did not experience the huge growth that the Department of Defense did between 2010 and 2010, when the budget control act was passed? Are Republican candidates not aware that these areas also contribute to our national security?

The chiefs are right. The main enemy is chaos. But in order to tackle the chaos in the world, we must first tackle the chaos in the Pentagon. For example, if Secretary Carter believes Russia is an existential threat, why is he continuing the “pivot to the Pacific" a policy he inaugurated when he was Deputy secretary of defense, and decreasing the percentage of the budget going to our land forces, who would be the most likely to deal with the threat from Russia?

Second, any of the Republican candidates are urging that we must urgently add more might to our nation’s military. However, these arguments for more and more forces aren’t connected to any strategy, nor any idea of how to pay the enormous costs. For example, some candidates have argued that we need to increase the size of the Navy from its current level of 275 ships to as many as 350. But they do not tell us for what, and when, and where. Why 300, and not 400 or 200? What about the mix of ships? Do we want 25 or 50 more littoral combat ships or, or more Arleigh Burke destroyers, or aircraft carriers, or submarines, or small coastal patrol ships? Finally these candidates ignore the fact that since it takes a long time to build a ship, the size of today's Navy is more a result of decisions made by the Bush administration. In fact, as a result of decisions made by President Obama the Navy will grow to over 308 ships by early in the next decade.

The supporters of increasing defense spending cannot give a satisfactory answer to why it is necessary to spend more than $350 billion over the next decade to modernize all three legs of the triad—and hundreds of billions more after that? Why have we waited so long to do this? Why do we not do it when the nondefense budget was essentially doubling in real terms in the first decade of this century? And why, in this day and age, do we still need nearly 5000 nuclear weapons?

The supporters of more money for defense also cannot tell us what the Pentagon is doing to rein in personnel costs that have it paying more and more for a smaller force. For example, why is the Pentagon not embracing reforms put forward by the Congress, like modernizing retirement and streamlining health care benefits? Or why did the Pentagon wait thirteen years to raise TRICARE fees, and why did the Joint Chiefs of Staff fight to establish TRICARE for life with no co-pays or deductibles, or allow retired pay to be raised from 40 to 50 percent after twenty years when there were no retention problems?

Why does the leadership of the Pentagon and these outside experts continue to put forth tired bromides, claiming that we now field the smallest Army since Pearl Harbor, the smallest Navy since before World War I, or the smallest Air Force in history, knowing full well that today's smaller force is much more capable than any of these? Why does the Pentagon leadership not respond to Army supporters when they complain about reductions to the number of personnel in the Army by pointing out that the Army added 80,000 people to the force to send hundreds of thousands of troops to fight the wars in Afghanistan, a situation that no longer exists?

Finally, what is the Pentagon doing about the exponential growth in the cost of weapons systems, estimated to have risen over $450 billion for the 80 systems currently in production, in addition to being more than two years late? Why are they forcing the Navy to buy the F-35, knowing full well that it does not need, nor can it afford it? Why not let it by the less-expensive and more-capable F/A-18E/F, instead? Why did OSD move the F-35 into production before all of the development was complete? Did they forget what David Packard, the Deputy under Richard Nixon and the best manager the Pentagon has ever had, admonished, to “fly before you buy?” Why does it not know how much of the Air Force's new bomber will cost, while promising it would be produced for $550 million a copy? Why does it not reduce the number of new ballistic submarines it wants to buy by placing 24 missile tubes on a submarine, rather than 16? As Sen. John McCain (R-AZ), Chairman of the Senate of the Armed Services Committee, who recently criticized the Pentagon’s handling of the long-range strike bomber and the KC—46 tanker programs, recently noted in a letter to the Secretary of Defense, “at a time when the defense budget continues to shrink, while global threats emerge every day, it is absolutely critical for the Defense Department to stop throwing more good taxpayer dollars after bad and start investing in programs that enhance the capability and readiness of our war fighters"

Why has the Pentagon been allowed to use the overseas contingency funds or the war funding budget as a slush fund for expenditures not related to the wars to get around the budget caps, something none of the other federal agencies were allowed to do?

Yes the world is unstable. But is not more dangerous than it was in the Cold War, when we spent a lot less on defense against a real existential threat. If wisely spent, the Pentagon has more than enough funds to deal with the situations—unless the foreign policy establishment again embraces the idea that the United States has the right and responsibility to police the world, a view that led us into the mindless, needless, senseless war in Iraq.