Boris Johnson Is Weak—But for How Long? 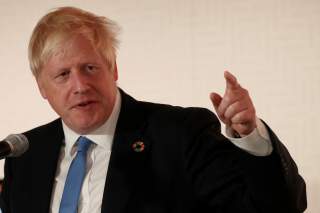 Britain’s exit from the European Union (EU) was always intended to strengthen the sovereignty of the UK Parliament. As a leading Brexiteer, then, Prime Minister Boris Johnson should be thrilled that the nation’s legislature is swelling in power before Brexit has even begun to take place. The only problem is that parliamentarians aren’t repatriating powers from Brussels—they’re wresting authority away from the prime minister himself. This has left Johnson exposed as the weakest leader in modern British history. Whether he can regain control of national affairs during the next few months will define Britain’s relationship with Europe for a generation to come.

For decades, a prevalent fear in Britain was that successive prime ministers had become too “presidential.” From this view, leaders from Margaret Thatcher to Tony Blair were guilty of aggrandizing the office of prime minister at the expense of Parliament. Britain’s government was becoming too centralized, undemocratic, and unaccountable—and with ministers of Parliament (MPs) either unwilling or unable to constrain the executive branch, the “cradle of democracy” was fast becoming little more than a rubber stamp.

Creeping presidentialism has been the furthest thing from anyone’s mind since Britain voted to leave the EU in June 2016. Theresa May lost no fewer than thirty-three votes in the House of Commons during her ill-fated premiership, including the largest parliamentary defeat in UK government history. She tried every trick in the book to persuade MPs to back her proposed Withdrawal Agreement with the EU—from “bribing” Labour MPs with promises of public spending to doling out knighthoods to waverers in the Conservative Party—but nothing worked. Three times she asked the House of Commons to endorse leaving the EU; three times she was rebuffed.

Most observers expected Boris Johnson to be a much more effective prime minister than May. He was assumed to be exactly the charismatic leader needed to break the parliamentary logjam and take control of the political agenda. But if anything, the erosion of prime ministerial power has accelerated during Johnson’s two months in office. His tenure has been nothing of torrid.

Johnson’s first showdown with MPs came when a cross-party group of parliamentarians proposed legislation to prevent Johnson from taking Britain out of the EU without a withdrawal agreement in place. The prime minister was adamant that the MPs had no business proposing such a law. He insisted that the threat of a “no-deal Brexit” was necessary to strengthen Britain’s negotiating position vis-à-vis Brussels. But his vigorous protestations fell on deaf ears: the bill passed with help from several senior conservative MPs, the first time in living memory that Parliament had passed legislation over and above the objections of a sitting prime minister.

The next challenge to Johnson’s authority came hot on the heels of this first defeat. Confident that the public at large would back his hardball Brexit tactics even if Parliament would not, Johnson twice asked the House of Commons for an early general election. Prior to 2011, prime ministers were able to call an election at a time of their choosing. Under the terms of the Fixed-Term Parliaments Act, however, two-thirds of MPs must vote in favor of dissolution—a significant check on prime ministerial power. Johnson failed to secure the required number of votes on both occasions, confirming that the prime minister is in office but not quite in charge.

The final and most damaging challenge to Johnson’s authority came after he announced that he would ask Queen Elizabeth II to prorogue Parliament for five weeks prior to October 14. In layman terms, this simply meant that Parliament would be briefly suspended in advance of a new legislative session commencing. But critics immediately accused the prime minister of trying to avoid parliamentary scrutiny ahead of October 31, the date upon which Britain was set to exit the EU unless an extension of Britain’s membership could be agreed.

A range of actors—businesswoman and campaigner Gina Miller, former Prime Minister Sir John Major, and a host of rank and file MPs among them—took Johnson to court over the issue of prorogation. They argued that Johnson could not advise the queen to prorogue Parliament if the intention was to prevent the legislative branch from carrying out its constitutional duties.

In a scathing judgment, the UK Supreme Court agreed unanimously with this interpretation and, moreover, concluded that Johnson had indeed been motivated by a desire to curtail the ability of MPs to hold the government to account. The prorogation was thus unlawful, the Supreme Court concluded. Johnson would have to submit himself to the judgment of MPs.

In the past, Johnson would have been forced to resign immediately for misleading the monarch and subverting the constitution. But the monarchy is no longer revered as it once was, and so misleading the queen is no longer a sackable offense in the eyes of the British public. Moreover, many in the UK media are still touting Johnson as a strong leader who should be lauded for his commitment to delivering Brexit. Conservative MPs won’t oust Johnson so long as he remains popular with the public at large, and Parliament cannot remove him a vote of no confidence without risking a general election, which the opposition parties do not yet want.

Johnson will probably weather this storm, regardless of how hazardous as it might seem. He may be weak, embarrassed, angry, and powerless to deliver his preferred Brexit policy—but he is still the resident of 10 Downing Street. In due course, he will get his opportunity to refer the question of his premiership back to the people in a general election. And when he does, several things will count in his favor.

First, Johnson has been gifted the opportunity to cast the next general election as a contest between “the people” and “the Establishment.” The EU, MPs, the courts—all these institutions are set against the will of the people, Johnson will tell his fervent supporters. This message will resonate with millions of British voters who yearn for Brexit and cannot understand why it has not yet happened.

Second, the political opposition to Johnson appears to be desperately ineffective outside the corridors of Westminster. In ordinary times, the Labour Party would be offering the country with a viable government-in-waiting. But instead, Labour is beset by infighting, weighed down by a confusing and unpopular Brexit policy, and badly squeezed between pro-EU parties (the Liberal Democrats, the Scottish Nationalists, and the Greens) and anti-EU groups (especially Nigel Farage’s Brexit Party). With the ranks of the opposition in such disarray, there is every possibility that Johnson could triumph at a general election with as little as a third of the popular vote.

It is difficult to know for sure when the next election will come. But one must happen soon—probably in November or early December. If Johnson is returned to power with anything approaching a sizable majority in the House of Commons, then he will be determined to assert his authority and erase the memory of these embarrassing first few months in office. The immediate focus will be on taking back control from Parliament, not Brussels. It will be a resurrection of executive control over Parliament, and it won’t be pretty.