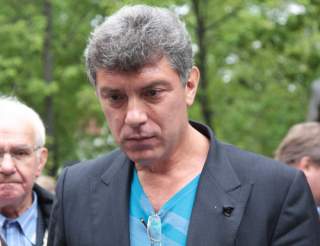 Of the many questions raised by the murder of Boris Y. Nemtsov, the fifty-five-year-old opposition figure who served in the 1990s as Nizhniy Novgorod province’s governor and then as Boris Yeltsin’s first deputy prime minister, two are particularly important. First: Who did it and why? Second: How will it affect the already rancorous relationship between Russia and the West?

Western governments have, appropriately, called for a thorough and impartial investigation to bring the killers to justice. Yet many pundits and much of the press, certainly in this country, seem to have reached a verdict already: Vladimir Putin ordered Nemtsov’s assassination in order to cow an opposition that he fears could revive and foment revolution, now that Russians are reeling from the double blow of Western sanctions and plummeting oil prices. By assassinating Nemtsov, it is said, Putin launched a preemptive strike. His intended message to those planning protests: Mess with me, and I’ll have you killed.

Now, anyone who believes that the Kremlin could not have ordered the hit on Nemtsov hasn’t been paying attention to what’s been happening in the Russia that Putin has built. The assassination of the intrepid reporter Anna Politkovskaya, the jailing of ex-tycoon Mikhail Khodorkovsky, the poisoning via polonium of the former-KGB-operative-turned-dissident Alexander Litvinenko—these are just some prominent examples that demonstrate that Putin’s government is not one you want to antagonize. If you do, you put everything at risk. It’s that simple.

But—and this is the problem with much of the opinionating on the Nemtsov slaying—one can’t simply assume that only the regime could have killed Nemtsov.

Putin has been accused of many things, but stupidity isn’t one of them, so let's consider the backdrop to Nemtsov’s murder. Western governments and not a few Russia experts have been confident that the bite of sanctions will cause Putin to back off in Ukraine for fear of a Russian Maidan movement produced by an economic meltdown. Yet Putin has expanded Russia’s support for the Donbas separatists and stepped up its military role in eastern Ukraine, even as the economic crisis has worsened.

Despite prophecies of Putin’s demise, there is no proof that he is in peril. Public opinion polls show that he remains very popular. True, these oft-cited numbers should not be abstracted from the rich diet of hypernationalism and conspiracy theories fed to Russians by the state-controlled media. Still, Putin is scarcely sitting atop a political volcano. Whatever the degree of Russians’ discontent over the Ukraine war and the economic downturn, it hasn’t enabled the political opposition—which remains in disarray—to regroup. The last thing Putin wants is tens of thousands of Russian citizens marching through Moscow’s streets. (Who knows where that could lead?) But that’s exactly what he got because of the anguish and outrage produced by Nemtsov’s murder. It’s hard to believe that the wily Putin wouldn’t have anticipated that.

Yes, Nemtsov was preparing to organize a protest against the war in Ukraine, but no one expected that it would draw a huge crowd; and an unimpressive turnout would merely have underscored the opposition’s impotence. Yes, Nemtsov was planning to publish a pamphlet (“Putin and the War”) that he believed would prove that the Ukraine war had long been in the works. But the Kremlin’s propaganda tools are formidable, as is its capacity to intimidate the non-official press (what remains of it) and bloggerati. Putin’s PR machine would have dismissed the revelations as disinformation and, if they included official documents, as a forgery. For good measure, Nemtsov would have been painted as a fifth columnist. Besides, killing him wouldn’t necessarily have prevented someone else from spilling the beans.

Masha Gessen, a savvy writer on Russian politics and author of a well-regarded book on Putin, offers a more plausible version of the “the regime did it” thesis. She believes that while Putin and his inner circle probably didn’t order Nemtsov’s assassination, the atmosphere of jingoism and political paranoia they have created may have inspired freelancing by rabid Russian nationalists. Then there’s the suggestion that Nemtsov’s assassins wanted to widen the rift between Russia and the West, in particular to shape the American debate over arming Ukraine. The advocates of this theory point to far-right Ukrainian groups. Islamic radicals have been tagged as well. Their motive: revenge for Nemtsov’s support for the French magazine Charlie Hebdo. But these folks don’t lose time going public; their aim is to spread fear through the “propaganda of the deed.” No one has claimed responsibility for Nemtsov’s execution.

In short, an avalanche of speculation appeared within minutes of Nemtsov’s murder, no matter the lack of firm evidence to back the rival accounts.

As for Russia’s relationship with the West, if the Ukraine war frayed it, Nemtsov’s assassination has shredded it. Nothing short of an investigation that finds the Kremlin guilty—and that’s impossible—will satisfy the severest Western critics of Putin. For this, the Russian president bears a great deal of responsibility. Now more than ever, he induces worst-case thinking, particularly in the United States, and the murder has made matters worse.

More specifically, those pressing to arm Ukraine will find that their case is now more persuasive, even though the fact of Nemtsov’s murder and the policy they recommend are conceptually and operationally unrelated. The first, while shocking, cannot provide answers to the questions raised by the second.

The purpose of providing Ukraine American weapons remains unclear. Is it to place Putin under military pressure so that he is forced to wind up the war and cut a deal acceptable to Kyiv? Or is it to provide Kyiv the wherewithal to defeat the separatists and dismantle their “republics”? If it’s the first (pressuring Putin), what is to stop Ukrainian president Petro Poroshenko, buoyed by Washington’s backing, from seeking the second (outright victory), if indeed American arms make the difference that proponents of arming Ukraine insist they will? There’s still no clarity on what Washington plans to do if Putin responds by pouring more troops and weapons into Ukraine and the separatists grab additional territory. Will President Obama dump more arms into Ukraine? What if that doesn’t do the trick? What is the distinction, drawn by those who favor beefing up Ukraine’s military, between defensive and offensive arms? Is a mobile air-defense system defensive? What about counterbattery radars?

As horrifying as Mr. Nemtsov’s murder is, it in no way resolves these questions. And unless they are resolved, the case for arming Ukraine remains weak. No matter: if the current ceasefire plans fails, American weapons will flow to Ukraine. And Nemtsov’s murder will have contributed to that outcome.

Rajan Menon is Anne and Bernard Spitzer Professor of Political Science at the Colin Powell School of the City College of New York/City University of New York, a nonresident senior fellow at the Atlantic Council, and a senior research scholar at the Saltzman Institute of War and Peace at Columbia University.