Bosnia as a Model for Securing Syria 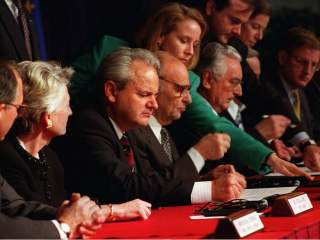 Strangely, as a very shaky and probably temporary cessation of hostilities begins in parts of Syria, the idea of restoring a strong unified Syrian state remains official American policy. State Department spokesman John Kirby went so far as to argue that the cessation agreement actually reduces the chances of the country’s eventual partition, whether de jure or de facto.

In a conflict that has killed at least three hundred thousand; displaced twelve million, of whom four million are refugees in foreign lands; created the greatest refugee crisis in Europe since World War II; inflamed Sunni-Shia passions across the Middle East; and created sanctuaries for ISIS as well as the Nusra Front, such a goal seems unrealistic. It also seems unnecessary, and almost romantic—somehow the ideal of a nonsectarian centrally run state must be preserved, even as far more basic human needs are trampled by this terrible war. With virtually all Sunnis in Syria and throughout the Middle East adamantly opposed to the continued rule of an Alawite leader with so much blood on his hands, all while President Bashar al-Assad is unwilling to step down, emboldened by Russian aid and recent battlefield victories, the basic ingredients for a stable and unified country are wantonly lacking. The current ceasefire cannot last.

Still, opponents of a “soft partition” of the country do have several valid concerns. By soft partition, we mean the creation of a confederal arrangement in which most governance and most security is provided in regions that are stitched together by a relatively weak central government, as in Bosnia after the 1995 Dayton Accords. Critics of such arrangements point out that they can make long-term peace harder by reinforcing and validating sectarian divisions. If done wrong, they can also weaken minority rights and legitimate ethnic cleansing even after the violence, producing additional foment and suffering. They can also harden the identities of each of the separate sectors—further complicating relations with Turkey, which will worry about a Kurdish independence movement, reinforcing its own Kurdish fears. A hard partition, or breakup of the country, would also be highly undesirable, not only magnifying the Turkish-Kurdish confrontation but causing grave concerns about a future rump state run by Assad with the influence of Russia and Hezbollah, unleavened by more constructive elements and dangerously opaque to most other states in the region.

Along with an increasing number of other scholars and former government officials, we believe that some kind of confederal arrangement for Syria may be the only realistic path forward. International negotiators will have to get the idea into the conversation when peace talks resume next month. Only Syrians can make the decision to proceed down this path. But at present, the outside world is perpetuating the fiction that confederation is not even an option—that somehow the fundamentally incompatible aims of the various belligerents can be reconciled through patience and brilliant diplomacy. This sentiment may sound noble at one level, but dangerous at another, for it prevents us from recognizing what will ultimately need to be done to facilitate a more realistic path to peace.

To be negotiable in coming months, and stable once adopted, a peace deal for Syria will likely have to include the following elements:

1) At least four main sectors of the country, including areas where Alawites and Christians now predominate near the coast, Kurdish regions in the north, Sunni Arab strongholds in the center and east of the state, and a shared zone that includes the major intermixed cities—which should stay intermixed as much as possible in any confederation arrangement. An alternative deal could effectively share the major cities between the Alawite/Christian region and the Sunni Arab region, keeping at least Aleppo as part of the latter.

2) Legal codes and monitoring mechanisms to protect minority rights, including property rights, in each sector, unlike the case in Bosnia, where Serbs were officially encouraged to leave Sarajevo and relocate in the Serb Republic. Means of safe relocation should be part of any deal, but should not be preferred.

3) Governance structures and security forces for each zone, created in the implementation phase of a deal, with economic and security aid conditioned on compliance with all elements of the peace deal, and with an end to fighting inside each zone (except of course for ongoing operations against ISIS and Nusra for as long as needed, undertaken in concert with outside powers).

4) Deployment of a peace implementation force that will patrol along internal borders, use force robustly against spoilers, and conduct community policing in the intermixed cities including Damascus, Homs, Hama and Aleppo. This force can include Russians; it will probably need to include Americans at least for logistics, counterterrorism operations and command/control arrangements; clearly, it will also need a Muslim backbone and substantial European participation.

This should be our vision for the future. It will likely not be negotiable for a range of reasons in the near term. But it has a number of immediate implications for policy. First, as noted, the idea itself needs to be introduced into a diplomatic conversation that has perpetuated the delusion of putting Humpty Dumpty fully back together again for too long.

Additionally, it should shake us out of the false hope that we can avoid creating a strong Sunni Arab opposition force. A credible capability to counter Assad, Russia and Hezbollah is needed in more than just the Kurdish sector. Without it, Assad and Putin will almost surely not be serious about compromise. Even if negotiations are successful, Sunni Arab security forces will be needed to police their own populations, enforce laws developed by a future Sunni Arab regional government, help us defeat ISIS and Nusra, and then sustain that defeat over the longer term. We will, in particular, need to put many more trainers and advisors into Syria than the fifty that President Obama sent last fall, and we will need to be somewhat less skittish about vetting procedures for those who once had tangential links to extremist groups.

Finally, with a confederation model in mind, concepts can be developed now for creating legal codes for the protection of minorities, as well as economic recovery strategies, for each of the sectors. Some could even be implemented before a final peace deal were reached, if safe zones could be made adequately safe and stable in certain parts of the country. This approach would, among other things, begin to address the refugee problem at its source, if not immediately, then perhaps over the coming months. This thinking could also extend to initial election processes—which, we would argue, should focus first and foremost on the autonomous regions and smaller jurisdictions, and not lead to near-term national elections, which can be extremely divisive if done wrong or too soon, as in Iraq.

Today’s Syria ceasefire is like a Hail Mary pass without Aaron Rodgers. But as poor as its prospects may be, it may help us identify a constructive path forward, which can be relevant to our Syria policy even if the current cessation of hostilities soon gives out.

Edward P. Joseph is Executive Director of the Institute of Current World Affairs, and a lecturer at Johns Hopkins School of Advanced International Studies; Michael O’Hanlon is senior fellow and director of research in the Foreign Policy program at the Brookings Institution.