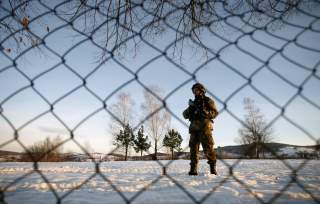 ONE LAST vestige remains of the post–World War I stipulation that put Southern Slavs of three major faiths—Catholicism, Orthodoxy, Islam—under a single flag. It is Bosnia and Herzegovina. Twenty years ago it was nearly destroyed by a three-way war between Croats, Serbs and Bosniaks that left some one hundred thousand dead and made refugees out of another two million. Its dissolution has been steadily wrought out since, through what some observers have termed a “war by other means.” Its weapons are those deployed by Balkan elites everywhere—corruption, electoral machinations, ethnic strong-arming—but only in Bosnia have they pushed the state to the brink of nonexistence. The virtual disappearance of the word “Bosnian” from public discourse in recent years—citizens of Bosnia identify themselves by religion more today than they did during the war—may indeed prove self-fulfilling: the future of Bosnian statehood has become the focus of the general election, set for October 2018. Its destruction would give the Croats in the southwest, the Serbs in the north and east, and the Bosniaks clustered around Sarajevo their own states. Proponents of federalization are not just political elites, for whom carving up the state would be a boon of power and resources, but citizens of a country whose very premise for existing is rejected by more than half the population.

Surviving a war only to be eviscerated by bureaucratic mismanagement: Bosnia’s is one of the more perplexing European crises of late, and among the least discussed. The vast expanse of journalism once fixated on Sarajevo has withered into a thin stable of academic journals and specialist roundtables. Walk around the capital today, and the flagging inertia of NGOs and diplomatic missions is everywhere palpable. Attention has shifted to Kosovo and Ukraine. “Bosnia is the place you send your interns,” Leila Bičakčić, the head of the Center for Investigative Reporting, told me. “You do not put your serious people here anymore.” Nowhere can the war be easily forgotten. Cities are still speckled with bullet holes. Sheikh-funded refugee towns remain pitched up all across the Dinaric valleys. But perhaps more revealing of what Bosnia means for the world today is the cheap commodification of the killing. In Sarajevo, you can have your hotel arrange a visit to the Tunnel of Hope that funneled the besieged to safety. Slogans from the war have been memorialized as refrigerator magnets. The Genocide Tour takes you out to the mass graves at Srebrenica in a caravan of minibuses.

THE “INTERNATIONAL COMMUNITY” that once relished its self-satisfaction over having salvaged Bosnia has little idea what to do with it today. Any taxonomy of the debacle must begin with the 1995 Dayton Accords—an agreement about which everyday Bosnians were never consulted, and which was never intended to be permanent, but whose exhaust fumes now infiltrate almost every aspect of their lives. Dayton stopped the war by essentially freezing it in place. Two mistakes were apparent from the outset. One, the failure to effect a victor of any sort all but guaranteed the conflict’s continuation through the apparatuses of the emergent Bosnian state. This kept not just the war’s winner but even its very events subject to wild contestation. Walking in Sarajevo one morning, I met two Bosnian Serbs who were mapping out the old marketplace that was shelled in a pair of attacks that killed 111 in 1994 and 1995. They had been dispatched from Belgrade as part of an investigation attempting to demonstrate that the trajectory of the rockets showed they could only have been fired by Bosniak forces against their own civilians. Twenty years on, revisionism trumps reconciliation in Bosnia.

Dayton’s other mistake stemmed from a misunderstanding of why war had broken out in the first place. Any acute reading of Bosnia’s past would have shown that, historically, the problems tended to arise from outside forces that intervened to disturb its fragile ethnic balance. Despite no shortage of such external candidates, Western diplomats overwhelmingly favored the tribalism narrative: Balkan peoples had been fighting one another for a long time. It is only grimly ironic that many of the more obvious culprits behind Yugoslavia’s unraveling—the role of the IMF and World Bank in priming the country for social unrest by pitting it through a decade of austerity after Tito’s death, for example—are now once again at work in Bosnia.

But if the war did owe to ethnic divisions, it was necessary that they be emphatically bridged in its aftermath. The paradox of addressing religion was that Dayton shackled nearly everything to it. In Bosnia, the four centuries since Westphalia seemingly never happened. You are Catholic, Orthodox or Muslim before you are Bosnian. There are no minorities or dual identities. Almost everything, from school curricula to public-sector employment to health care, is determined from birth by religion. You can only vote for politicians of your own religious ethnicity. Well-known to observers within Bosnia, a matter of apparent indifference to the Eurocrats who blindly demand its continuation, the Dayton system punishes electoral moderation, erodes political accountability and all but rewards extremism—and it has been churning for a generation now.

A third, related problem then emerged. Dayton issued Bosnia not so much democracy as “democratization.” How to preserve the centrality of the state while satisfying the territorial claims of the respective combatants? The answer was to tell the Bosniaks it was a republic and the Croats and Serbs that it was a federation—all the while giving no Bosnians a state equipped with any meaningful external sovereignty. Bosnia is Switzerland minus most of the functioning bits. Smaller than West Virginia, it is composed of fourteen different territorial units, two entities and twelve governments. At the top is a central government in Sarajevo that revolves the presidency between the three ethnicities. Beneath this, there is the autonomously run Brčko District, and then two entities. In the north is the Republika Srpska, a heavily centralized statelet in which 30 percent of Bosnians—mostly Serbs—control 49 percent of the landmass. In the south is the Federation, a heavily disparate collection of ten cantons, most messily divided between Croats and Muslims, many equipped with different legislative codes, hierarchies of alphabets, anthems and flags. That both entities essentially operate as their own states—they elect their own governments and run their own security forces—doesn’t so much quench the desire for autonomy as dangle it before them.

Attempting to congeal this morass together are some fifty state ministries, hundreds of public-sector institutions and seventy government agencies. They are staffed by that fourth and most robust of Bosnian subgroups: the civil servant. In a country where nearly one in three cannot find work, one in five of those who do work are employed by the state. “Don’t count on another war destroying Bosnia,” Siniša Pepić, a Bosnian Serb economist, told me in Banja Luka. “Public debt will wreck it first.”

Wrangling over control of the state is an encrusted class of politicians who, in relative terms, draw higher salaries than any other parliamentarians on the European continent. Most fall into one of six parties, two per ethnicity, an assemblage dubbed the “sextet” that conforms to no discernible left-right spectrum because the currency of political support in Bosnia has never evolved beyond issues of ethnicity. Most elites traffic in support from their records during the war, or those of their fathers. Among the Bosniaks there is Bakir Izetbegović, son of Alija Izetbegović, the former president. Among the Croats there is Dragan Čović, who has been indicted on corruption charges three additional times since being removed from the tripartite presidency by the European high representative in 2005 for abuse of power. Among the Serbs there is Milorad Dodik, the greatest threat to Bosnia’s continued existence. Many observers of Bosnia suspect that what unites the trio of elites is their own collusive self-enrichment: they despise one another but couldn’t exist without each other. Elections are preceded by stunts: a cross erected above Sarajevo whips Bosniak voters into fears of Serb nationalism, the demolition of a memorial honoring Muslims stokes talk of the rehabilitation of Milošević. In Bosnia, the rising tide of nationalism raises all three ethnic boats simultaneously. “What did Freud call it? The narcissism of minor differences?” Predrag Kojović, the leader of Naša Stranka, one of the only multiethnic parties in Bosnia, asked me. “All three ethnicities have gamed the system with identical reasoning: Why risk losing support over actual problems when you can reap enough votes from perceived problems?”

The result is a state supervised by the West, captured by three different sets of elites and ransacked by six political machines—all simultaneously. Bosnians call it štela, the “contactocracy.” The greatest barrier to its reformation is the lumbering convolutions of the state itself, a piñata of clientelism that gets crammed with more and more political appointees every time power turns over from one ethnicity or party to another. Any attempt to fix the system must start by agreeing on its problems. Few Bosnians can manage even this. For Serbs it is overly centralized and for Bosniaks it is too disparate, while for Croats it is nothing: they lack any entity of their own to mismanage.